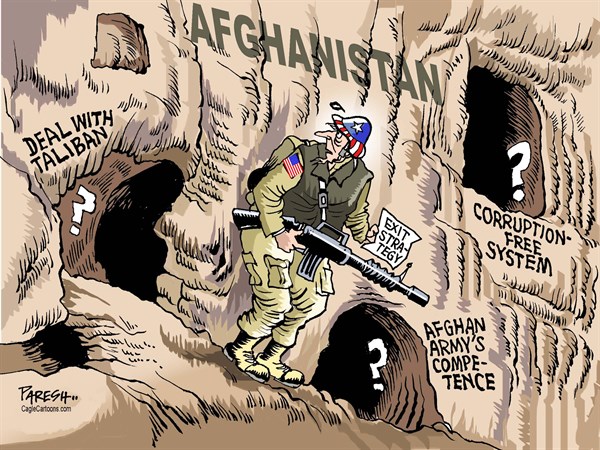 The search for “good” Taliban is on in Afghanistan; the U.S. has announced that no action is to be taken against those who are not a threat to the U.S., including Mullah Omar.

The United States has said that after Jan. 2, 2015, the U.S. Army will not take any action against Mullah Omar and other Taliban leaders in Afghanistan if they pose no direct threat to the United States. Addressing a press conference in Washington, Pentagon spokesman Rear Adm. John Kirby said that the U.S. will not operate against anyone simply on the basis of their being Taliban members. Nevertheless, he used the occasion to clarify that those who fight will not be spared by any means. Kirby emphasized that any Taliban who operate against the U.S. or against its Afghan partners will automatically fall within the scope of the U.S. military operation.

Addressing the final news conference for the year last Friday, President Barack Obama reassured the American public that he is committed to his promise to end the U.S.-led war in Afghanistan at the end of 2014. Obama said that in less than even two weeks, the U.S. mission that has continued in Afghanistan for more than 13 years will come to an end. However, Obama gave full permission to his troops to combat extremists in the event of their becoming direct threats to the U.S. or to Afghan forces.

After 9/11, America’s enemies in this region were al-Qaida and the Taliban. The U.S. and its allies needed Pakistan’s cooperation in confronting these enemies, cooperation which Pakistan provided. With this cooperation, and with the use of modern arms and trained armies, the U.S. and its allies totally crushed Afghanistan. Ammunition and iron rained down on the land of Afghanistan, and land forces also employed their talents and weaponry to the full extent. Thousands of al-Qaida members and Taliban were killed, and at the same time, hundreds of thousands of innocent citizens were also killed, including children, old people and women. In the words of America, it broke the back of al-Qaida.

The Taliban were removed from power but could not be eliminated. They still exist as a force in Afghanistan and some other countries, and the U.S. has even carried out direct, as well as indirect and secret, negotiations with them at times. Although the U.S. stayed in Afghanistan for 13 years with full pomp and power, it could not realize its desire to completely eliminate the Taliban; nor could it persuade the Taliban to cooperate with the Afghan government. Now that a big part of the U.S. Army will be leaving Afghanistan in about a week and a half, without coffins, the Americans are hoping that the Taliban who continued to confront them for 13 years will start behaving like good children and pledge allegiance to Ashraf Ghani and Abdullah Abdullah. This is not simply an illusion or a misconception on the part of the U.S., but inane thinking. The Taliban maintain a hold in many areas of Afghanistan and influence in several others; they are simply lying in wait for the U.S. and its allies to leave Afghanistan — when they can implement their plan to occupy Kabul.

Despite the presence of tens of thousands of military experts and their operations, the governments of the previous Afghan president, Hamid Karzai, and current President Ashraf Ghani have remained weak in most areas other than in cities such as Kabul. At the beginning of the coming year, following evacuation of NATO forces from Afghanistan, the government of Ashraf Ghani will have to face severe problems despite having full or partial authority in different regions. Perhaps the U.S. and the Afghan administrations are relying on the 150,000 members of the [Afghan] National Guard. But these are the very U.S.-trained soldiers who carried out dozens of attacks on their American teachers. It is possible that tomorrow these U.S.-trained soldiers will be seen standing in support of the Taliban in the same way that the army of President Hafizullah Amin joined the Taliban following the Russian evacuation.

The U.S. defeated Russia with help from Pakistan; it then took the route home, leaving Afghanistan in a state of anarchy and leaving Pakistan suffering to this day from the ill effects of its actions. Had the U.S. restored peace in Afghanistan by establishing a strong government there, the hundreds of thousands of Afghan refugees would not still be a weight on Pakistan after 35 years. As it did in the past, the U.S. is once again leaving Afghanistan without any planning. Pakistan today is in the grip of terrorism and lawlessness that is stronger than any it experienced in the past. Pakistani Taliban — products of the Afghan[istan] War — have turned the whole country into an ammunition pile.

On Dec. 16 these terrorists, carrying out the worst example of brutality and barbarity in human history, bathed hundreds of children in dust and blood at the Military Public School in Peshawar. According to the brutal terrorists, this was retaliation for operation Zarb-e-Azb, being conducted by the Pakistani army to eliminate the terrorists. Following this incident, the whole country united under the Nawaz Sharif government for the elimination of terrorists. The prime minister lifted restrictions on the death penalty to be effective immediately. So far there have been six executions, while gallows have been constructed in prisons for more.

After the Peshawar incident, the government immediately called a conference of parliamentary parties in an effort to form a working group that would reach a consensus regarding a strategy. Yesterday, this group agreed on eight recommendations including the establishment of military courts and repatriation of Afghan refugees. The prime minister was briefed about these recommendations and, in this context, has called a meeting of parliamentary parties to approve an action plan based on the working group’s recommendations. The meeting will be attended by political leaders, including Imran Khan.

Along with execution of terrorists, the Pakistani army is conducting rapid operations in which 200 terrorists were killed within a week and twice the number arrested. In the most recent action in Karachi, 13 terrorists belonging to al-Qaida and the banned Tehrik-e-Taliban were killed in confrontations; arms and suicide jackets were recovered from them. About 300 suspected terrorists were arrested in operations carried out in Mansehra and Islamabad.

Pakistan helped the U.S. with its heart and soul in the war against terrorism, as a result of which, the flames of warfare that were extinguished in Afghanistan have started flaring up in Pakistan. Until yesterday, the U.S. was placing pressure on Pakistan to take evenhanded action against those who posed a danger to Pakistan as well as those who did not pose a danger to Pakistan, without discrimination. Now the U.S. is in search of “good” Taliban in Afghanistan.

Whether the matter relates to Pakistan or to Afghanistan, “good” Taliban are those who give up arms. Taking the position that we will not confront those who are not confronting us is equivalent to deceiving oneself. This thinking is no different from saying that “you cannot use your weapons; but if your reservations lead you to wield arms, then we will also retaliate.” Prior to the U.S. invasion, the nature of the Taliban position in Afghanistan was no different from this; they had not hurt U.S. interests and even bin Laden had not stood up with his gun in Afghanistan. Still, the U.S. placed a price of $10 million on Mullah Omar’s head. In light of the U.S. statement today, how would the U.S. treat him if he makes an appearance at the beginning of next year, decorate him with garlands?

America is preparing to leave Afghanistan at the mercy of a lame government and an army (the [Afghan] National Guard) of questionable loyalty. Further, the fire of terrorism is blazing in Pakistan. Should the U.S. once again leave Pakistan without its friendship and support — as it has done in the past — then Pakistan will eventually emerge from the morass after it faces difficulty. However, its trust in the U.S. will be finished and it will not wish to cooperate with the U.S. ever again. It is possible that in only a few months following evacuation, the U.S. will be in need of Pakistan’s cooperation in Afghanistan.