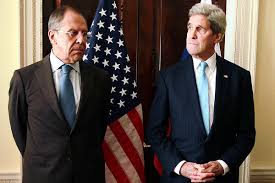 The president of the Center for System Analysis and Forecasting, Rostislav Ishchenko, told “Actual Comments” how he estimates the possibility of the U.S. joining the Normandy format.

If the U.S. joins the Normandy format summit, then there will be a chance to reach some arrangement. But all the latest action of the United States have been directed at strengthening confrontation with Russia, not at reducing it. Therefore, from my point of view, that kind of hoped-for outcome could happen, of course, but it is unrealistic. The Soviet Union conducted negotiations with Hitler prior to the war, but it did not prevent the war from happening.

I do not get tired of saying, as I have for over six months, if not longer, that any negotiations for a settlement in Ukraine can only be efficient if the United States is on the other side of the table. Until then, while there is no second participant at the negotiating table, there is nothing to be discussed. To agree with Poroshenko is the same as agreeing about the termination of the war in 1941 with Col. Gen. Model or Field Marshal Von Manstein.

Recently, attempts were made to draw America’s attention to the need for its full participation in the negotiation process; certain signals were sent to Washington. In particular, Lukashenko openly said that the United States has to join the Minsk process. Vladimir Putin stated that Russia is holding the door open; it is clear to whom this statement was addressed. Therefore, nothing unexpected is happening here. Everyone understands that if you want to conduct a negotiation, you will not do it with a mirror; you need a negotiation partner.

In addition, the United States refuses to take part in such a format. It attempts to take the role, in the best scenario, as an arbitration judge.

From my point of view, the American government has already lost this war. While good peace conditions are on offer, the United States should accept them. But the issue is that any state is controlled by its elite. I have very serious doubts about the elite in the United States being ready to reconcile its defeat. Meanwhile, to the contrary, everything indicates that the American elite intends to keep this confrontation growing.

Andrey Tikhonov participated in the conversation.