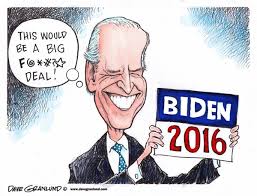 It seems that this weekend Joe Biden will make public his decision about whether or not to run for the Democratic presidential nomination. This is a battle that has so far been rather lively on the Republican side, but quite the opposite on the Democrat’s side. It has been a boring battle.

Yes, there is Hillary Clinton’s email scandal, and polls show that the popularity of the independent senator from Vermont, Bernie Sanders, has increased, but in the end, both phenomena merely reflect the fact that very little is occurring there.

That is why expectations are so high surrounding the decision of current Vice President Joe Biden, a man who managed to gain a significant degree of popularity throughout President Obama’s time in office and whose potential candidacy one in five Democrats nationwide see positively.

Will Biden Be Given a Third Chance?

He could do it, first and foremost because he has grown a lot, politically speaking, since those two fleeting attempts to achieve the nomination of his party in 1987 and 2008.

One of those two past attempts came to an end just three months after it began, in June of 1987, when he was accused of plagiarizing a speech by British politician Neil Kinnock.

His 2008 effort lasted a little longer. He campaigned for a year until he achieved less than 1 percent at the Iowa caucus in January of that year.

A few months later, given [Biden’s] experience with foreign policy, Barack Obama invited him to be his running mate during such complicated times for the United States, which included dealing with two wars and a very poor image in the Arab world.

Another reason in favor of making a third attempt is that he would be fulfilling the final wish of his son Beau, who, before succumbing to cancer this past May, asked his father to run for president one more time.

Yet, I see two problems with the potential candidacy of Biden. The first is that, as he himself said, in order to achieve the presidency of the most powerful country in the world, you need to be 110 percent convinced.

A Biden who is weighing whether or not to run five months after Hillary Clinton, his strongest Democratic rival, began her campaign does not seem to be that committed.

The second problem is that the most recent polls show that if Biden enters the battle, he would manage to take several points away from Hillary Clinton — but this would only strengthen Sanders, not make [Biden] the favorite.

The question asked by The Washington Post, by many Americans and probably by Biden himself these days is whether the second most popular politician in the United States wants to play the role of robbing the lead from Clinton — and nothing else — in his third attempt to be nominated by his party.

It appears to be a rather mediocre role for Biden, who is expected to make his decision public before his party’s first debate, which will take place next Tuesday, Oct. 13.