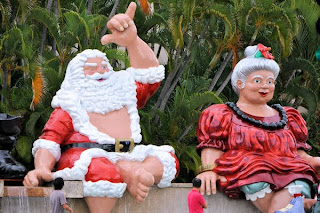 In the United States, 2015 was the warmest year in human memory. Nevertheless, large numbers of Americans continue to deny global warming is in any way connected to human activity.

America’s best known Christmas poem, “A Visit From St. Nicholas” (more commonly known as “The Night Before Christmas” and “ ’Twas the Night Before Christmas”), describes the arrival of Santa Claus at the houses where good little boys and girls live in order to leave gifts for them. The scene outside their houses is described as a winter idyll illuminated by the moon and revealing a sleigh pulled by eight tiny reindeer. The poem was written by Clement Moore, a professor of classical languages in New York, in 1823.

Hot Dogs in the Backyard

If professor Moore could see this Christmas Eve in his hometown, or a bit further south around Washington, D.C., he would be amazed. Newly fallen snow? Forget about it. And if the forecasts are right, one will be able to grill hot dogs in the backyard on Christmas Eve — no problem. Santa may also want to swap his duty uniform for something a bit more summery: Moore describes him as being dressed all in fur from his head to his toes. Some historians recently researched George Washington’s death and found that in mid-December 1799 he went outside his Mount Vernon plantation home and returned with ice crystals in his hair. He later developed a fatal infection.

I must admit weather and climate have dominated my thoughts and actions this year: My book, which looks at the influence of both on our nation’s history, was just published. But even people who seldom look skyward or at the thermometer have noticed that here in Europe 2015 was the hottest [year] they can recall. And that both Clement and George’s life experiences regarding weather seem separated from us by far more than just 200 years.

With this column, I have tried to present to my European readers (for whose attention and feedback I now express my deepest gratitude) a multi-faceted view of life in the United States — the good, the fascinating and the whimsical. As in every country, there are less happy stories to report as well. The denial of man’s contribution to climate change running through half the American political establishment certainly belongs in that category. But that said, many Americans, meanwhile, have formed different opinions from those held by some of their elected officials. According to public opinion surveys, 76 percent of the population is now convinced that climate change is real and is a danger. Even among Republicans, 59 percent — a majority — believe the same.

The Advantages and Disadvantages of Growth

Of course, the implementation of climate protection measures faces not only political hurdles but also a piece of the American mentality. As always, growth is an overly important term — and particularly in booming urban locations such as Washington, the downside has long been apparent. Ever-increasing population growth, bigger shopping centers and more construction have long since transformed daily traffic into a tortuous ordeal. The three-kilometer​ tram route in Washington — promised for years but still delayed — seems like a satire, as do many railway lines. We can only hope that a long-overdue rethinking about the climate, plus public pressure, will finally nudge the United States into the 21st century.

And to my readers: I leave you with a heartfelt line from Moore’s poem: “Happy Christmas to all, and to all a good night!”