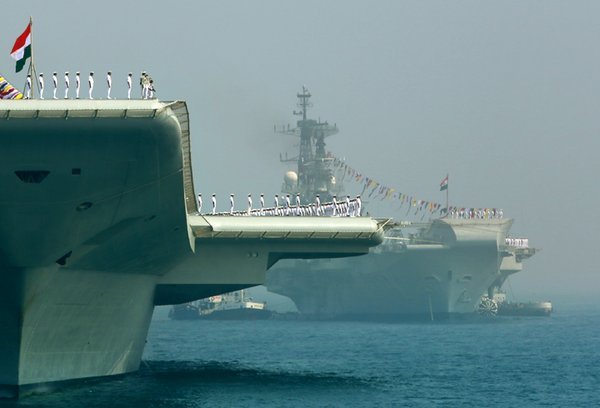 According to a Reuters report on Feb. 10, an anonymous U.S. official from the Department of Defense leaked information that the United States and India are carrying out talks and that the two countries might conduct joint naval patrols in the South China Sea.

The report says that the United States hopes that by taking a more unified stance with its allies in the Asia-Pacific area, it will it be able to oppose China in South China Sea conflicts.

The report points out that the United States and India have been slowly strengthening their military relations for the last two years. Both countries cooperated with Japan last year to carry out naval exercises in the Indian Ocean. But the Indian navy has never conducted joint patrols with other countries.

The U.S. official from the Department of Defense stated that both countries held talks on joint patrols, which look like they will begin this year. Patrols will simultaneously be carried out in the Indian Ocean and the South China Sea. But the U.S. official did not allude to the scope of the patrols.

Neither the United States nor India has any territorial claim in the South China Sea, but both claim to support the freedom of aerial and naval navigation in the area.

According to an informant from the Indian government, the idea of the two countries conducting joint patrols came about after December 2015 when the head of the Indian Department of Defense paid a visit to the commanding officer of the United States Atlantic Command in Hawaii. This informant claimed that “both sides went into detailed talks, and discussed the possibility of joint patrols.”

The report said that India has always been committed to strengthening trade ties with China, but an Indian naval leader said that recently, India has been slowly strengthening its naval presence in areas outside of the Indian Ocean. This is a sharp difference from actions taken several years ago. The Indian naval official also pointed out that most of the activity by Indian naval ships in the South China Sea area involves movement toward Vietnam. Vietnam is also currently developing its military powers in response to naval disputes with China. Even so, this Indian commander also said that the idea of joint patrols represents a very slow process.

With regard to problems in the South China Sea, Chinese diplomats have already said many times that China’s sovereignty and other related rights were formed throughout history and are supported by generations of Chinese governments. China is beginning construction in its territories, a matter which has to do with its sovereignty. This construction is not in response to, nor does it affect, any other country. It will have no effect on any country’s freedom to conduct naval or aerial navigation as described by international law.

China has always respected and upheld each country’s freedom to navigate the sea and air space in the South China Sea according to international law, but China is absolutely opposed to any country infringing on China’s sovereignty or security under the guise of naval or air navigation. China will absolutely defend its territorial rights, its safety, and its legal and reasonable maritime rights. China will issue a firm response to any premeditated provocation by any country. We will continue to closely monitor the maritime and air space situation in the South China Sea and adopt all necessary measures as the need arises.