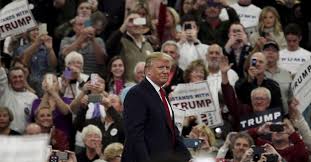 As expected, Donald Trump swept to victory in Florida, Illinois and North Carolina, but lost in Ohio for the sole reason that he was competing against Ohio’s governor, John Kasich.

U.S. political experts can’t quite believe it, just like they didn’t believe during the period before the primaries that a vulgar and unruly tycoon could obtain so many votes and climb to such an extent in his quest for the official presidential nomination. Now, they’ve accepted it but only because it’s incontestable. Yet once again, they refuse to believe he has a real shot at receiving the official nomination of the Republican Party – the very party that cemented the sacred name of Abraham Lincoln.

The arguments for their refusal to accept this possibility are plentiful, and they sound pretty convincing. It would be impossible, they say, for the party itself to endorse him now, when they can see the gigantic and indomitable monster ardently heading toward the frightening possibility of victory and a seat on the throne of the West. They think he would rip up the flags of Western countries, and he would betray the very foundations of the party with his obscene radicalism and petty interests. They will never accept him, even at the last moment, and even as they repeatedly beat their brows in a mantra of last resort.

They say, rightly so, it would be inconceivable to see a multi-ethnic country, inhabited by an astronomical number of Hispanics, Muslims and African-Americans, as well as millennials, progressive women and liberal men, ever voting for their nemesis just when their government has reached the pinnacle of progressivism. Seeing the drastic change in the direction of their legendary party and sickened by so much nastiness, even moderate Republicans are saying the same thing. They are being pressured into betraying their party and giving their votes to Hillary Clinton out of fear, the entire country acting out of an unprecedented state of shock and trying to avoid what until recently seemed unthinkable.

Republicans could really do this. Collective fear could stop Trump’s wild and all-powerful race for money and populism just short of the final hurdle. But this is exactly where history could go dark and transform into the most picturesque of possibilities for Trump. U.S. political analysts make their estimates and arguments based on the 50 percent block of silent people who are abstaining in the midwestern and southern states, according to tradition, as opposed to basing their arguments on the bastions of potential, invisible voters hidden among the 300 million inhabitants of a country of contrasts. These invisible voters are not exactly recognized as being predisposed toward progress in a place where racial supremacy still dictates that Confederate flags hang from the roofs of houses that have been worn away by time since the Civil War.

The Trump phenomenon has seeped into these states, into the invisible bastions of passion that were barely lit by the Obama paradigm. And there are many of them. These are the people who always refuse to vote as an act of rebellion against an enduring establishment, who refuse to vote because they ignorantly refuse to be democratic or out of simple apathy toward abstract issues like human rights, or even out of plain indifference to the responsibility of voting. They are now captivated by a discourse that speaks of hatred, with talk of the rebirth of a nation into the world. This discourse also claims to recognize their racial purity and proposes a defense strategy against their enemies, linking the invisible voters together for the first time in a conscious collective around the effectiveness of a vote. They will vote now if they feel they will frighten off their own shadows: immigrants who deny them their racial superiority, the terrorists that want to invade someday and stay, and the communism that burns a hole in their economic hyperactivity.

It seems that the analysts are not counting the exotic votes in an exotic campaign, and that they continue to overlook history and time’s dark sense of humor, and the tendency of these elements to spit in the face of axioms. It seems they even refuse to understand that history usually moves back on itself like a circle, not forward in uninterrupted lines between the margins of time. Perhaps this time, the historical patterns will want to be merciful with their fragile human puppets.

If the patron saint of comedy has his way next November, the West will officially return to the 20th century.