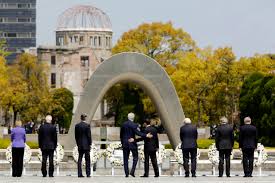 The Group of Seven summit of leading industrial nations began today in Japan. Prime Minister Shinzō Abe used his position as host to promote his own agenda, adding irrelevant topics to the discussion, such as the South Sea problem and the atomic bombing of Hiroshima.

Ever since he was elected, Abe has worked relentlessly to demonize China within Japan and internationally in order to change Japan’s peaceful constitution. He has clamored for the “Chinese Threat” theory so as to alienate China in Asia and the world, and has used every opportunity to fight with China.

The G-7 was called a club of rich countries when it was founded. As China and a number of other countries rapidly developed, they have surpassed many members of the G-7, but most of the power in the world still rests with the G-7. With the leaders and ministers of the G-7 countries holding their summit in Ise-Shima and Hiroshima, the world is focusing its attention on Japan. Of course, the Abe administration will not give up this chance to manipulate the international press and blame China, as well as to deny Japan’s invasive past.

According to the Japanese press, the G-7 summit, held between April 10 and April 11, will “issue a special document,” “expressing concern for China’s promotion of a militarized base in the South Sea for the first time,” and “concern for Chinese vessels entering the waters surrounding Diaoyu (Senkaku) Islands multiple times.” The Abe administration is allegedly hoping to reach an agreement to curb China at the G-7 summit.

The so-called South Sea problem is a territorial dispute between China and some countries in the South Sea. Ever since America’s strategic pivot to the East and promotion of its strategic rebalancing in Asia, this conflict between China and neighboring countries has been exaggerated. In the past few months, the South Sea problem has become the number one topic for China and America. Japan is an American ally, so America is determined to drag Japan into the issue, and Prime Minister Abe is using this opportunity to give his “overseas military operation” a chance to launch. This is the real motivation for the Japanese government to actively add the South Sea problem to the G-7 agenda.

The G-7 countries are all outside the South Sea; legally, the seven countries including America and Japan have no right to criticize China about the issue. But America is the leader of the G-7, and Japan, being the host country, is eager to sell the issue. For the four countries in the European Union and Canada, the South Sea is irrelevant to their core interests, but being American allies, they blindly believe in the so-called “global arbitration.” Plus, they are guests of Japan, so they have to play along. The British and German foreign ministers actually took time to visit Beijing before going to Japan, showing the discord among the G-7 regarding the South Sea issue.

Japan intentionally chose Hiroshima as the setting for G-7 this year. Seventy-one years ago, America dropped two atomic bombs in Hiroshima and Nagasaki to force Japan to surrender, killing 140,000 Japanese people in the process. The international community memorializes Hiroshima as a way to bring an end to nuclear weapons, but the Japanese government has an ulterior motive.

The agenda of the seven countries’ ministers is grossly taken up by discussion of the atomic bombing. After Abe came into power, the Japanese government consistently asked multiple global leaders to visit Hiroshima and Nagasaki, trying to play up Japan as a victim of World War II, and diluting its role as a warmonger and invader. They only want the world to remember Hiroshima, but to forget the Nanking Massacre, comfort women, and Pearl Harbor. One has to realize that if there had been no latter, there wouldn’t have been the former.

The Abe administration wants to deceive and hijack the western world when it comes to the South Sea and Hiroshima, but the G-7 won’t fall for the plot. China belongs to the world, and the world needs China. Even America has promised not to fight nor confront China, so we shall see how far Abe can take his anti-Chinese policy.

The author is China’s former ambassador to Iran.