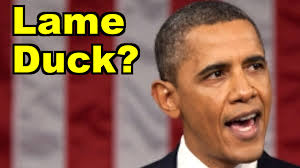 Barack Obama is a lame duck president. We can’t expect too much from him but his insights should continue to guide us.

Ten months before he leaves the White House, Barack Obama paid a farewell visit to Europe. The first Pacific president of the United States had long neglected — some might even say ignored — the European continent. But the refugee disaster that threatens to tear apart the unity of the European Union, the possible departure of Great Britain from the Brussels community and the acutely controversial TTIP free trade agreement threatening to reignite politically are all driving him back to the “Old World.”

This gave editorial writers everywhere reason to begin writing the first obituaries for the 44th president. As might be expected, the finished products gave widely divergent assessments of Obama’s tenure – even in the same newspaper. For example, in Die Zeit, Joerg Lau determined Obama had been good for the world but Josef Joffe described his administration as “eight years of illusionary, dreamy foreign policy.” His critics call it a total failure. They miss a strategic vision of America’s global leadership role, and accuse him of pulling back from the front ranks of global politics and undermining American credibility with his hesitant Syrian policy.

Obama had drawn a red line at the deployment of chemical weapons in Syria, but when Bashar Assad ignored it Obama cravenly backed down. His policies were influenced not only by the rise of the Islamic State but by the reappearance of Russia on the Middle East stage and even by the mass refugee movement which was caused by American inaction in Syria. Phil Stevens wrote in The Financial Times that Obama had become incapacitated by decision making: “Analysis drifts into an excuse for paralysis, but inaction carries as many dangers as intervention.”

Even Obama fans admit the president has made mistakes. In his “Yes, We Can” campaign and his early global politics speeches he raised expectations unrealistically high; complex realities prevented fulfillment of his expectations. Likewise, it was a mistake to draw a red line in Syria at all; a superpower can’t be caught bluffing. At the same time, he deserves credit for getting rid of Assad’s chemical weapons arsenal by diplomatic means along with assistance from Russia. Credit is also due for the reasons he gave Jeffrey Goldberg for declining to intervene militarily in Syria in the famous interview in The Atlantic magazine, reasons which were not only honorable but also convincing. Concerning Libya, however, he called his intervention against Gadhafi a huge mistake and noted that despite everything the administration undertook, “Libya is a mess;” something that in private he terms “a shit show.”

Obama took office seven years ago under less than ideal conditions; his predecessor left him with a financial crisis and two wars. He was determined to leave his own successor with, in his words, a clean barn. Several goals have eluded him: a “new dawn” in the Middle East; progress toward a world free of nuclear weapons; a new start with Russia; ending the Israeli-Palestinian conflict with a two-state solution. Here he deserves little to no blame for failure; the conditions at the time were simply not right and, last but not least, in Moscow and Jerusalem there was no interest in negotiating a two-state solution to the Middle East conflict. Nonetheless, he accomplished several things: The nuclear agreement with Iran; reconciliation with Cuba and the Paris climate accords.

And after decades of American adherence to the “Washington Playbook,” Obama changed course telling Jeffrey Goldberg, “It’s a playbook that comes out of the foreign-policy establishment. And the playbook prescribes responses to different events, and these responses tend to be militarized responses. Where America is directly threatened, the playbook works. But the playbook can also be a trap that can lead to bad decisions.” Obama believes that military intervention just in order to establish credibility is a foolish undertaking. He also believes that America cannot constantly rid the world of misery. His message is no less valid today than Gen. Dwight D. Eisenhower’s was 55 years ago when he warned Americans about the dangers of the military-industrial complex.

Obama won’t accomplish a lot more during his last nine months in office and that includes implementing the Transatlantic Trade and Investment Partnership and the Trans-Pacific Partnership. But perhaps we shouldn’t be in such a rush to praise the accomplishments of an intellectual statesman nor to complain about his shortcomings. Let us rather take his insights to heart:

“But they remind us that no Holy War can ever be a just war.”

“There will be no comprehensive solution to Islamist terrorism until Islam reconciles itself to modernity and undergoes some of the reforms that have changed Christianity.”

“The Saudis need to ‘share’ the Middle East with their Iranian foes … and find an effective way to share the neighborhood and institute some sort of cold peace.”

“Climate change is a potential existential threat to the entire world if we don’t do something about it.”

“At times we will – either because we’re not directly threatened or don’t have the right tools in our toolbox – tragically have to take care not to jump into a crisis feet first.”*

Barack Obama is a lame duck president. We can’t expect much more from him, but his insights need to continue leading us, especially those that apply to Europe. What the superpower can’t fix, Europe won’t be able to either. Let’s not kid ourselves that it could be otherwise. Not even with Obama.

*Editor’s note: This quoted remark, although accurately translated, could not be independently verified.