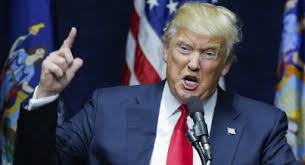 Trump’s reaction to the massacre of 49 people in Orlando shows how radicalized the Republicans have become. The party itself is to blame for the fact that tea party xenophobia is now socially acceptable in America.

Just a few days after a horrible terrorist attack killed many victims, the most powerful Republican appealed to the American people, saying, “The face of terror is not the true faith of Islam. That’s not what Islam is all about. Islam is peace.” He went on to say, “Women who cover their heads in this country must feel comfortable going outside their homes. Moms who wear cover must be not intimidated in America. That’s not the America I know. That’s not the America I value.” He concluded his brief statement by noting, “Those who feel like they can intimidate our fellow citizens to take out their anger don’t represent the best of America, they represent the worst of humankind, and they should be ashamed of that kind of behavior.” So said President George W. Bush on Sept. 17, 2001, during a visit to the Islamic Center in Washington, D.C.

Just 15 years after 9/11, in the wake of the massacre of 49 people at the Pulse gay night club in Orlando, Florida, Republican presidential candidate Donald Trump said in a New Hampshire campaign speech that American Muslims were partly responsible for that crime, as well as the San Bernardino, California shootings, because “people knew he had bombs all over the floor, people knew it, why didn’t they turn him in?” he asked rhetorically.

Trump’s reaction is another break with American political convention. Normally, presidential candidates issue calls for national unity in the wake of such tragedies. Trump, in sharp contrast, struts around bragging on Twitter that he saw it all coming far in advance. Earlier, all the Republican candidates distanced themselves from voicing anti-Islamic sentiments. Mitt Romney even disagreed publicly with one voter who described Islam as a “violent religion.”

Trump Has No Problem with Conspiracy Theories

And in October 2008, John McCain took the microphone away from a woman who called Obama “an Arab.” McCain lectured her that in reality, Obama was “a decent family man” whom she need not fear.

Not so Trump: He seems to regard decency as a sign of weakness which is why he never corrects his fans whenever they shout out rumors they’ve heard about Obama. (“He’s a Muslim!” “He wasn’t born in America!”)

Every U.S. voter who believes in conspiracy theories is in good company with Trump, father of the birther movement who believes Obama’s birth certificate is a forgery. It’s common knowledge that factual accuracy means nothing to him; fact checkers at PolitiFact say that 76 percent of his statements are untrue.

His 35-minute New Hampshire speech is packed with lies, such as stating hundreds of thousands of Muslims are entering the United States without benefit of background checks when in reality 2,019 refugees have been accepted from Syria. He also indulges in incendiary generalities. In numerous TV interviews he has intimated that the president may have been complicit in the terror attacks, saying, “We’re led by a man that either is not tough, not smart, or he has got something else in mind.”

The Delayed Victory of a Tea Party Hardliner

Comparing Trump’s reaction with statements made by previous conservative presidential candidates shows Republicans becoming increasingly radicalized. Culpability is shared by Bush, McCain and Romney. George W. Bush based two wars against predominantly Muslim countries — Iraq and Afghanistan — on the desire to democratize them. That was an insignificant notion that had its origins in religious conviction and a belief in U.S. superiority.

With no thought given to Sarah Palin’s lack of credentials to be vice president, McCain nonetheless chose her as his running mate in 2008. She used her popularity to promote the radical tea party movement. The fact that she was under contract to Fox News for a number of years is logically consistent. The conservative cable news broadcaster has maintained for years that the United States is standing at the brink of collapse, that a horde of terrorists is poised to invade the U.S. from Mexico, and that the world’s problems can only be solved with more American military involvement.

Even Romney, who has been criticizing Trump for months, has scarcely made any effort to control the hardliner elements in his party. The Republican message continues to be that those who remain steadfastly uncompromising and relentlessly critical of Obama, such as Ted Cruz, will eventually be rewarded by the voters and the conservative media.

Republicans as well as Democrats like to say they’re members of a “big tent” party in which there is room for many differing opinions. But many of those assembling in the Republican tent these days can’t get very far preaching tolerance, religious freedom and racial equality.

Republican Reactions to Trump’s Speech Haven’t Yet Come In

For Republicans, this Tuesday is an important day. Up to now, Republican leaders haven’t responded to Trump’s speech. If they — above all Paul Ryan — really hold Republican values near and dear to their hearts, then they must reject Trump’s statements.

Ryan, speaker of the House of Representatives, described Trump’s attack on a judge of Mexican extraction as “the textbook definition of a racist comment.” In December, Ryan condemned Trump’s intention to forbid Muslims entry into the U.S., calling his statements “wrong.”

Now would be the right time to bring those statements back into the light and ask Trump to rescind them publicly. Should the billionaire refuse to do so, Ryan should then withdraw Republican support for him. But that much consistency and decency has become a rarity among Republicans.