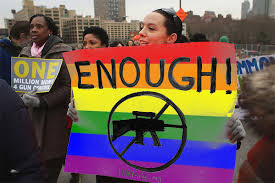 Once again, a gruesome incident has occurred in the United States. At a nightclub in Orlando, Florida, a man opened fire with an automatic rifle, killing at least 49 people and injuring more than 50. This is the worst gun-related crime in American history, and the sorrow and rage cannot be repressed.

President Obama condemned the attack as an act of terrorism, emphasizing the need for unity in opposition to the threat. The extremist Islamic State declared an attack on Florida, but there remain some uncertainties about how this relates to the incident. It is strongly believed that the gay nightclub was targeted as a hate crime. We need complete clarification of the context behind this incident, and we need to sever this chain of violence.

Gun control must come before anything else.

The suspect is said to have worked for a major security company, and was used to handling small arms. He idolized Islamic extremism and was questioned twice by the FBI for making inflammatory remarks to co-workers. Still, as long as there is an environment where firearms are legally and easily acquired, crimes will be difficult to prevent.

In America, guns kill at least 30,000 people a year. Last December, a couple influenced by the Islamic State group opened fire in a welfare center, killing 14 people. While innocent people become victims in schools and churches, absolutely no progress has been made toward any countermeasures, which is deeply concerning.

So far, Obama has treated stronger gun regulations as his most important issue, but he is hindered by firm resistance from conservatives. Three years ago, Obama demanded that Congress enforce mandatory background checks for anyone trying to purchase a gun; he also wanted to outlaw the production and sale of automatic guns and other assault weapons. Not only did the majority of the Republican Party object, but a number of Democrats also did not support his demands.

The Second Amendment of the U.S. Constitution grants citizens the right to bear arms: “The right of the people to keep and bear Arms shall not be infringed.”* Using this as a pretext, influential lobbies like the National Rifle Association claim the amendment guarantees their right to own guns in self-defense. Since the days of settling the Wild West, there remains a strong culture of families protecting themselves with their own strength.

However, the lethal firepower of weapons, like the automatic rifle used in the Orlando incident, is far too excessive for self-defense. We need to accept that the legal distribution of such weapons encourages violence.

In January, Obama’s plan to strengthen gun control was broadcast online; his executive actions would, among other things, make background checks obligatory when buying or selling guns. He did everything in his power to support these executive actions, working within the law to avoid painstaking deliberations by Congress, but even this was completely insufficient.

“There is nothing normal about innocent men and women being gunned down where they work,” Obama urged. We must engrave those words on our hearts once again, and take at least one single step toward opposing this threat. It’s foolish that people depend on weapons to ensure peace when they bring about even greater danger. I hope for a great societal transformation – one that brings this to an end.

*Editor’s note: The full text of the Second Amendment reads as follows: “A well regulated Militia, being necessary to the security of a free State, the right of the people to keep and bear Arms, shall not be infringed.”