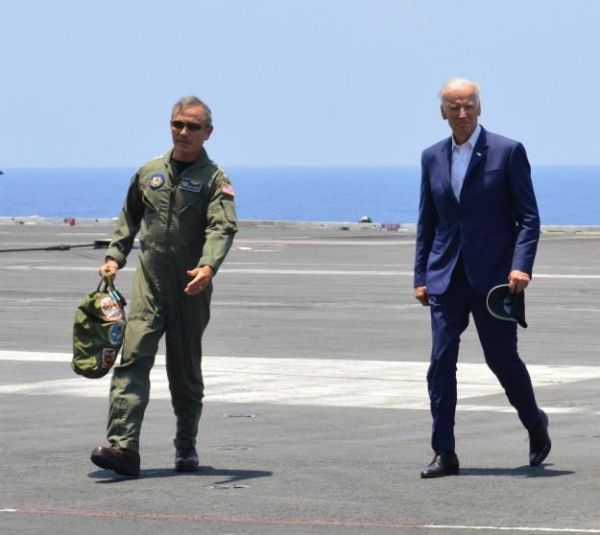 When American Vice President Joe Biden arrived in Australia last Saturday for a visit, he said to the local media, “We expect China to play by the same rules as everyone else.” He also added in a hypocritical tone, “We’re urging both China and the Philippines to abide by the ruling.”

After the verdict in the so-called South Sea arbitration was revealed, more American officials and politicians voiced their support of the decision than officials or politicians from any other country, even though President Obama has not yet made a statement. America seems to be more enthusiastic about this issue than the Philippines. Manila’s most pronounced expression was their welcome of the arbitration result, but they made no high profile insistence as to what China should do, while Washington insisted that the arbitration verdict should be able to constrain China and urged China to respect the result.

America is acting like the boss who is behind the scenes of this arbitration, while Biden’s recent statement probably was an extension of Washington’s large-scale discrediting of China.

However, the public opinion war directed by America seems to lack stamina. As of now, only Japan is following America’s lead. While the Shinzo Abe administration was proactive, willing and excited about publicizing the arbitration verdict, other American allies were murkier in their official attitudes. The European Union, the Association of Southeast Asian Nations and other important international organizations all chose to stay silent.

The Philippines, in particular, lacked any continuing enthusiasm; they only wanted to talk to China to solve the problem. With the original pivot point that America relied on in challenging China wavering, no matter how far America’s reach may be, it will lack strength now.

The whole thing is a farce. America, the Philippines and all other parties including the arbitration court expected China not to abide by the arbitration verdict. Biden’s reiteration of the American position was akin to saying something useless for the sake of saying it. As time passes, the news value of such American pronouncements will only decrease.

America is the least rule-abiding country in the world right now. Just how many of the wars America started and how many of the sanctions America imposed after the Cold War were authorized by the United Nations? Which international regulation supported the many American mistaken bombings? Did international rules allow the U.S. Federal Reserve’s quantitative easing for the financial crisis and permit America to take advantage of the world? Did international rules allow America’s PRISM project to damage the interests of the whole world?*

When did the world ever have an arbitration court decide to whom one’s sovereign land belonged and then draw borders for countries in conflict? And do affected countries who have refused to participate in the arbitration since the beginning have to follow the verdict? In this area, China’s proposal to hold bilateral discussions to solve problems is the widely-accepted and supported international rule.

China is unwavering about its determination not to accept nor participate in the arbitration decision. Anyone pressuring China about this will lose one’s authority and will lose face. Biden probably said what he did because he is used to no one listening to what he says. Of course, liking such rejection is entirely his own business.