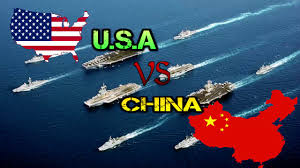 On July 29, the RAND Corporation, a U.S. think tank, published its latest report, which predicts four possible scenarios in which a Sino-American war could happen. The report takes the years from 2015 to 2025 as its research focus. It argues that in the wake of the increase in China’s military power, once the U.S. and China go to war, U.S. Armed Forces have no way of ensuring the conflict would expand in the direction they have predicted, and they will also not necessarily be able to obtain a decisive victory. We are getting closer and closer to 2025, and the U.S. obtaining victory in the future appears even more difficult. But this does not necessarily mean that China could win the war.

The report argues that no matter what kind of war the U.S. and China fight, China’s losses will all be larger. Furthermore, these damages include not only military losses, but political and economic ones as well. The U.S. GDP, for example, will decrease anywhere from 5 to 10 percent, but China’s is likely to fall anywhere from 25 to 35 percent. The U.S. will only have to deal with increased bipartisan disputes, but China will potentially face social unrest and ethnic divisions. In addition, the report argues that if the war had broken out in 2015, the U.S. would have only suffered losses to its naval and air strength, its aircraft carriers and its military bases in the Asia-Pacific, but the continental United States would not have been threatened at all.

The RAND Corporation has a close relationship with U.S. political and military circles; it is the most influential defense research think tank. The company’s research report on China’s political and military affairs is widely valued in the U.S. and throughout the West. One of its reports from more than 10 years ago proposed that once war erupts between China and the U.S., the U.S. would be able to carry out air attacks against the Chinese mainland, using the U.S. bombing of the Chinese Embassy in Belgrade as an example, raving that China “wouldn’t need to take even one pair of American boots,” but it “would take U.S. air attacks.”*

The U.S. and China both obviously have departments and organizations researching contingency plans for the chance that war breaks out between the two nations, but doing an internal study is a very different thing than publishing it. Publishing this kind of report poisons the social atmosphere of the U.S. and China, without a doubt; it also becomes a fight of public opinion and bears similarity to psychological warfare, and the overall negative effects are completely unavoidable.

The RAND Corporation and other organizations frequently publishing this kind of report put U.S. “strategic disregard” on display. They think if they irritate China a little bit, it’s no big deal; even if the Chinese don’t like it, they still have to take it. The source of the Americans’ self-confidence is the way they constantly treat Chinese: “We know you (China) have improved very quickly, but you still have a long way to go when compared to us.”

China’s military strength and economic clout are still inferior to the U.S., a fact that Chinese citizens clearly understand themselves. Most Chinese people also recognize that once war breaks out between the U.S. and China, China’s losses will possibly be slightly larger than America’s. However, when the Chinese consider the circumstances of a war between the two nations, the disparities are not limited only to these points.

China does not want to go to war, especially not with the U.S. If the U.S. and China do go to war, the only situation under which it could happen would be the U.S. breaking down China’s front doorway and provoking China to a level it cannot accept. The Chinese people would then be forced to fight. When it comes to moving toward war, the Chinese are very cautious. However, once we start to fight, Chinese people fight with a determination far greater than that of the U.S. Our ability to sustain the losses associated with war also far exceeds America’s.

The RAND Corporation claims that because of economic recession China will experience social unrest, so much so that the nation could break up. But we feel that, on account of the damages from war, the U.S. is more far more likely to be thrown into a state of upheaval first. This is because going to war with China in China’s coastal waters is not based on the core interests of the United States. Instead, it’s just that the U.S. wishes to maintain its pipe dream of forever being the world hegemonic power. Suffering the losses of war will force America to wake up to reality.

The statement that the continental U.S. will not be threatened in the event of a war with China has certain conditions. One premise is that the U.S. must not drop a single bomb in Chinese territory. If U.S. Armed Forces, just as the RAND Corporation suggests, carry out air raids against China just like they did more than 10 years ago, U.S. territory will definitely be included in the range of China’s military strike capacity. Americans know that China has this kind of capability, and the people in Washington and throughout U.S. society need to understand clearly: The Chinese do not lack this kind of resolution or determination.

In a situation where the U.S. and China undergo military conflict, those powers which provide bases and direct military support for the U.S. will become the targets of Chinese retaliation. They perhaps fear that it will be too hard to sustain the long list of damages that comes with war. In the western Pacific Ocean, there exist only disputes over reefs, and the possibility of these reefs directly triggering a war are awfully small. The biggest risk faced by Japan, the Philippines and the other nations involved is that they might possibly be forced by the U.S. into a war because of their military alliances.

This report by the RAND Corporation should remind us how important it is that Chinese military power become even stronger. China must continually strengthen its construction of a deterrent force that can threaten American territory. This includes the capacity to carry out a nuclear strike anywhere within U.S. borders, as well as the ability to cover the whole of America with non-nuclear strikes. The more powerful our capacity of this kind, the more respect our peaceful attitude will be given. Furthermore, the U.S. will be more likely to restrain its warlike impulses.

The U.S. and China cannot go to war lightly; it would be best if they never did. But, I’m afraid that it is not as simple as making a request. It’s only if the American people believe deeply that a war with China implies losses the U.S. would be unable to bear that peace will hold firm and not be broken.