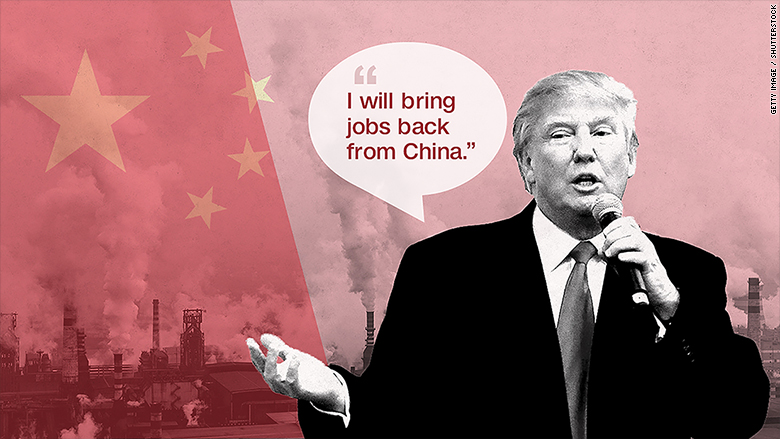 The American election is stirring up Chinese interest, and this interest has increased since Clinton and Trump entered into the latest stage of the election. More and more online chat groups have been discussing the abilities and characters of the two candidates, debating who will ultimately “wipe out” whom. And those who want to see Trump triumph as the underdog are seemingly on the rise.

There are those in China who use humorous, slightly derogatory nicknames for Trump. And from these nicknames it isn’t hard to see that, originally, the opinions of Chinese web users and the mainstream American public opinion were the same: Trump was a joke. But along with his victories, little by little, those who began to “like” Trump have increased for various reasons.

What are these reasons? One of the most important reasons is that Chinese people do not like Clinton. The Chinese public doesn’t understand Trump, but the bad impression Clinton has made is already deeply carved into general Chinese public opinion. First, the majority of the Chinese public believe that Clinton is “quite malicious” toward China and that she is highly ideological — typically raising difficult questions about human rights in China. Additionally, while it was Obama who initiated the “rebalancing the Asia Pacific” strategy, it was originally Clinton who proposed this while she was secretary of state: her “pivot to Asia” and “smart power” diplomacy.

In the eyes of the Chinese public, Clinton appears dishonest and highly careerist. Since the Lewinsky scandal, she has been able to “suffer in silence” for the sake of her political goals, and her appetite for power and her tough style is not in harmony with Chinese society’s expectations and ideas of female politicians. She is already very experienced, and, for the most part, people think that if she were to become president, the U.S. would probably become much more rigid toward China.

Trump is new to politics, new enough to mean that people could have disillusions about him. After Trump unexpectedly gained strength within the Republican Party, a few Chinese people started predicting that he could win, and the more he won, the more confident those people felt, and the more they felt obliged to publicize their thoughts on the Chinese internet; they are now helping the Chinese public understand more about Trump’s “merits.”

Trump loathes bureaucracy of any kind, he does not feel bound by political correctness, and his mouth is like a runaway train — all this is exactly what appeals to the Chinese so much. Although Trump has used strong words against China, he has not particularly picked fault with China politically; he isn’t waving the flag of human rights, and while he is always blaming China for “manipulation of exchange rates” and “stealing American jobs,” the Chinese people who do not have a deep understanding of international relations are likely to believe him to be a little “easier to handle.”

There are also some Chinese people who want him to win because of the American hype surrounding him. They think Trump is “unreliable,” but that he is more likely to be unreliable to America and the West, and, even if this is inconvenient for China, China will not be the first to be inconvenienced.

As well as the mainstream American elites disliking Trump, Europe also dislikes him, and Japan fears him coming to power. Well, let’s see — there’s no harm in letting this guy try to be president, and he’ll likely turn America and the West into a complete mess.

When it began, the American election wasn’t worth watching. Now Trump is the reason it is worth watching. Sometimes he makes a fool of himself, other times he makes a fool out of America; he curses the hypocrisy of American politicians, while he himself is also criticized by other American politicians. Lots of Chinese people have viewed spoof videos of Trump online, and they believe that this sort of man should be president.

Trump has turned this general election into a crosstalk event, and the Chinese people who like him mostly like him for the entertainment value he brings. However, the Chinese people observing the American election with a more serious approach are a little more hesitant about Trump. If they want Trump to win, it is only because they have no desire whatsoever to see Clinton win because if she is elected, she will definitely be the worst American president for China. Trump could perhaps be a little more reasonable regarding China.

Generally speaking, Chinese people have a very pessimistic opinion of Sino-U.S. relations, and, as a whole, they are not entirely convinced that there will be an American president who is “good to China.” So their biggest concern is who — Trump or Clinton — will be worse for China? And if the answer to this question is unclear, just look at which of them could potentially be worse for America. And if it’s still unclear, just look at which one is more likely to say unconventional things and who is more likely to entertain everybody. After looking at it all like this, Trump is a bit more appealing to the Chinese eye.