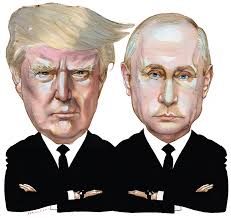 Trump understands the new status quo and is downplaying Russian ambition since he could care less if the Russians call the shots in those parts of the world to which he’s indifferent.

While it may yet be young and vaguely defined, the Trump-Putin doctrine, something unprecedented in post-World War II geopolitics, is becoming ever more clear. In truth, this statement is a bit un-nuanced; there have been times when similar doctrines have been drafted; with France, De Gaulle and the ubiquitous and unending anti-Americanism of De Gaulle’s followers being the noteworthy example. But these are different times, and France is one thing, the U.S. is another.

Even if it’s difficult to pinpoint a coherent line of logic in his actions, on the issue of foreign policy, he has indeed maintained a consistent position — though it may have varied at times in terms of its reach and the level of urgency with which it is expressed — that marks a break with established American foreign policy from the Cold War and post-Cold War era. These positions of Trump’s that he’s expressed over the course of his transition into government as well as into national and international politics are grounded in his own personal opinions, which spring from the only experience he has: making deals and running his businesses. Though we might consider him to be lacking in experience and dangerous, the fact of the matter is that he is who he is; I don’t think he’ll change easily, not least because he’s a smug person who has a high opinion of himself. Given that these character flaws didn’t prove to be obstacles to his winning the presidency, Trump is unlikely to change his style. Sitting quite smugly, convinced that he’s right and reflecting on how he’s clinched every goal he set out to achieve in spite of everything and everyone that stood in his way, Trump feels no self-imposed pressure to change course, and places little value on counsel coming to him from outside his circle of faithful followers.

Of what is Trump so convinced? To begin with, he’s convinced that U.S. foreign policy vis-à-vis Russia has been unnecessarily hostile, and that there must be a significant reversal in this hostility. He’s likewise convinced that the United States is shouldering the costs of protecting numerous countries and areas of the world that could well take care of their own defenses, even if this means they acquire nuclear capabilities. He’s also convinced that NATO is an outdated organization that is, at worst, no longer necessary. He also believes that the successive American and European invasions of Iraq, Libya and Syria have been monumental disasters, which were ill-conceived, ill-prepared and that failed to take into account the consequences that would result from eliminating figures such as Gadhafi or Saddam and attempting to eliminate Assad, all of whom, even if bad leaders, guaranteed (and guarantee, in the case of Assad) regional stability, the disruption of which has given way to the Islamic State and chaos in Iraq, Libya and Syria. He’s convinced that the only real enemies of the U.S. in existence today are the Islamic State group and, to a lesser degree, Iran and China, which, for China’s part, should be the one to deal with North Korea, with the U.S. placing enormous pressure on Beijing to do so.

The first thing worth noting is that there are many issues about which Trump is correct: U.S. allies have for many years refused to share the financial burden of caring for their own defense. Moreover, few other things have been as erratic, chaotic or inconsistent as U.S. policy toward Iraq, Afghanistan and, most notably, Libya and Syria. Ukraine is yet another example of a failed policy whose permanent consequences have been felt vis-à-vis the division of that country and the annexation of Crimea, a territorial change that everyone has conceded.

The disaster in Syria, a civil war provoked by the Americans, French and British, who were convinced that they could topple Assad — one of Russia’s scant allies in the region — without any consequences, has been one of the gravest foreign policy errors ever committed by the Western powers. The anti-Assad rebels whom they supported, were, in reality, a dangerous mix of factions. Moreover, the power vacuum that emerged in Syria and Iraq allowed for the appearance of the Islamic State group. They thus created a valuable opportunity for the Russians to feel legitimized in sending their air force, marines and ground troops to support Assad; after all, if the USA, France and United Kingdom felt they had the right to participate in the Syrian Civil War without authorization from the United Nations, why shouldn’t the Russians do the same? To use a Trump analogy, it’s not hard to see how the Russians viewed the attempt by the Western powers to topple their ally, Assad, as being on par with, say, a pro-Russian guerrilla group emerging inside Saudi Arabia, an ally of the United States.

In practice, what Trump’s mixture of frankness, inexperience and ignorance, into which he’s also added his own intuition, has meant has been Trump’s internalization of all of the Russians’ reservations and criticisms of American policy under the Obama administration and the Clinton State Department. In doing so, while also sending a clear signal of his desire to improve relations with Putin, Trump has shifted the world’s outlook.

For the Russians — and for Putin — this is a golden opportunity to further their aggressive foreign policy, which has already borne fruit in Ukraine and Crimea and, going back further in time, proved successful in Georgia and Chechnya, even if this last region is technically within Russian territory. Russia’s territorial ambitions are nothing new, as they date back to Russia’s czarist imperial past, were adapted by the Bolsheviks — in particular by Stalin — and then suffered a considerable setback with the fall of the USSR and the rise of the unipolar world. It is in this context that the rise of Putin is best understood: He is symbolically and literally reclaiming Russian power as a worldwide force to be measured against everyone else, principally the United States. Trump understands this new status quo and is downplaying Russian ambition since he could care less if the Russians call the shots in those parts of the world to which he’s indifferent. There has likewise been a clear step backward in the desire for American interventionism, reflected in the return of economic protectionism, as such interventionism is now thought of in a negative light, with no attention being paid to apportioning spheres of influence. Interfere with and roughhouse us, the protectionist impulse goes, then the punishment will be severe for all nations and peoples involved.

This is a policy that provides the Russians with a wider geopolitical reach and allows the Americans to move forward with their own tactical plans. In particular, what interests Trump is that the American “fortress” prevent jobs, factories and resources from leaving, while it also denies its enemies — beginning with Muslims — from getting in. Putin can live well by this policy or understanding with his “friend” Trump, whereby his hands are freed to make claims. While Putin has a foreign policy, Trump doesn’t, nor does he want one; if Trump should become interested in a foreign affairs issue, however, he’ll work it out with Putin.

Should it completely take shape — and all indications are that it will — the Trump-Putin doctrine will victimize U.S. allies, beginning with European countries that make up NATO and continuing with its Asian and Arab allies. For the Baltic States, former members of the old Warsaw Pact, which lie dangerously close to Russian territory, what happened in Crimea and Ukraine is never far from their minds. With respect to Japan and South Korea, Trump has pointed to their nuclear armament, a prospect that greatly puts at risk a region of the world where there’s already one truly dangerous country: North Korea. Emergent China, for its part, will never allow Trump’s irresponsible game of abandoning the “One-China” policy” and recognizing Taiwan to go without retaliation.

Trump, with all of his aforementioned flaws, now seems to be toying with the idea of nuclear arms over Twitter — a childish platform unfit for mature adults — but he knows what he wants, and above all, he knows what he doesn’t want. Even if Trump doesn’t make good on one-tenth of his threats, it will still be enough to ensure a point of no return for global politics. If there’s any man ready to exploit this situation, it’s Putin.

To a certain extent, Putin and Trump are similar: Putin has been portrayed as the macho Russian man, riding on horseback over ice, diving into water and hunting bears; and Trump as someone “grabbing them by the pussy” and living among gold-plated objects, chairs and furniture, things that no one thought people bought in real life — but which he really does. There is an enormous difference between them, however: while Trump is skilled and cunning, Putin is both intelligent and cold; he has a roadmap behind him that’s been in the works a long time.