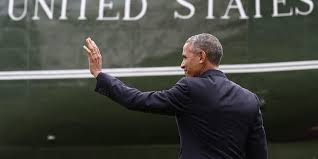 President Obama is leaving office with a furious scheme to plot against Russia and Vladimir Putin, who, according to Obama, is guilty of hacking Hillary’s emails in 2016, the California earthquake of 1906 and the sinking of the Titanic.

Obama ended 2016 by expelling 35 Russian diplomats, and greeted 2017 with a report that Russia, of course, intervened in the elections and put Trump on the throne.

Seventeen intelligence agencies signed a report to that effect which they presented to Trump, who had already previously discredited them, as was easy to predict.

Asking Trump to admit that he owed his electoral victory to Russia was to ask him to commit political suicide before assuming the presidency. There was no such suicide.

The outgoing president seems to have lost direction in his eagerness to endow the incoming president with a crisis with Russia that forces him to go where Obama wishes.

Democrat Harry Truman led the war in Korea in 1950, refusing to hold elections to reunify the peninsula. Democrat Kennedy plunged the United States into Vietnam. Obama increased U.S. troops in Afghanistan by 75 percent in 2009.

Who are the ones frightened by peace in the United States?