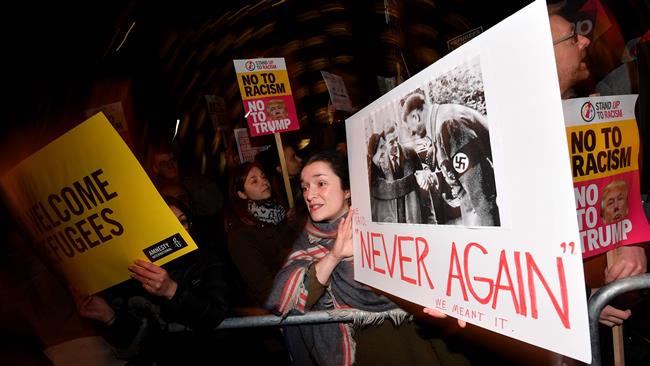 Trump isn’t crazy, and neither was Hitler. The attempt by some liberals to compare the path of the new U.S. president to an alleged psychological deviation of character is a huge fallacy, similar to the version of history that alleges the acts of the German dictator were a product of his supposed dementia. This focus alters the course of reality: Both men are products of a crisis in capitalist society, and their politics are centered on efforts to pull the capitalist system out of the crisis and demolish the civil and social rights of important segments of society.

Hitler was politically born out of the capitalist system that led up to World War I and the resulting economic stagnation of the 1920s and 1930s. He gained the support of important and discontented sectors of society, especially the impoverished and unemployed middle class, who carried him to power with their vote. He united society with the nationalist discourse of a “Great Germany,” attacking the labor rights of the working class and blaming the crisis on communists, Jews, gypsies and slaves.

Trump is the product of a profound economic, social and political crisis of 21st century capitalism. Just like Hitler, important sectors of the working class and the unemployed gave him their support, with the dream of “Making America Great Again.” Trump’s ideology is focused on blaming the crisis on Latin American immigrants, Mexicans in particular, as well as Muslims and China.

His first governing acts demonstrate that he is serious: decommissioning Barack Obama’s health care law, which gives health insurance to the poor; sharing hostile words with Mexico, ordering the construction of a wall, and announcing that Mexico would pay for it; blocking entrance to the United States to Muslims from seven countries; annulling the Trans-Pacific Partnership; encouraging Benjamin Netanyahu to continue the occupation of the West Bank and announcing the movement of the American embassy to Jerusalem; and ordering an attack on Yemen that resulted in more than 50 dead, including children.

Another liberal fallacy describes Trump as a “populist,” a term that has been distorted and made synonymous with “demagogue,” and which applies to anyone who criticizes free market capitalism. Trump is not a populist by virtue of his class origins as a construction entrepreneur, despite the fact that he is filling his government with representatives of the capitalist elite from the U.S. and military members of the far-right.

Despite the campaign he launched against Hillary Clinton, calling her a Wall Street agent, the New York Stock Exchange is thrilled with Trump’s government and first choices for Cabinet, all of whom support the threatened automobile and gasoline industries by weakening environmental regulations, among other things.

Like Hitler, Trump will fail to solve the U.S. crisis. His methods don’t attack the logical exploiters of the system but rather look for false scapegoats. Trump, like Hitler, will increase the suffering of millions of human beings, and no wall will able to contain the fights and popular insurrections his methods will provoke.

Just like the German fascist, Trump will be defeated by the mobilization of the social sectors upon which his attacks are focused, which have already taken to the streets to defend their rights: women, African-Americans, Latinos, Native Americans, Muslims, workers, environmentalists, etc.

*Editor’s note: Andrew Puzder, nominated to be U.S. secretary of labor, withdrew his nomination after this article was written.