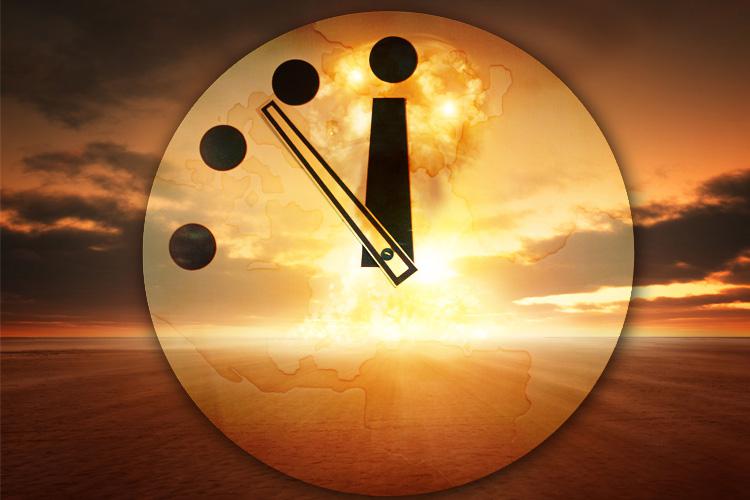 For the past 70 years, an American association of scientists has worked to predict how close the world is to a large-scale nuclear conflict – that is to say, to its complete destruction – by evaluating present dangers, bearing in mind technological advances and considering the way in which nuclear weapons, along with other weapons of mass destruction and threats to humanity, have evolved. Based on the association’s evaluation, it announces how many minutes it would take for the world to meet its end. This year, this same Doomsday Clock moved up by 30 seconds. A mere 2 1/2 minutes now stand before reaching “midnight,” or the time of explosion.

Thus, according to the Science and Security Board’s Bulletin of the Atomic Scientists, we are now closer to the apocalypse. The announcement was made in Chicago at the end of January, a few days after a New York multimillionaire’s inauguration, without having taken into account, to a large extent, the frenetic activities set in motion by the White House’s new tenant.

A central reason cited for the change was Donald Trump’s election, in addition to erratic statements made by the then-presidential candidate. And based on what we’ve seen during these early days of Trump’s presidency, the clock will likely continue to get closer toward “midnight” over the coming 12 months.

This uptick in the Doomsday Clock moved it 30 seconds closer to a point where it’s been only once before. In 1953, the same year that a series of hydrogen bomb tests were being carried out first by the United States and then the Soviet Union, the association determined that it would take a mere two minutes to reach a global catastrophe. The clock has oscillated between seven minutes, when the association first published its bulletin in 1947, and 17 minutes, in 1991, the same year that the Soviet Union officially met its end and the two atomic superpowers began to reduce their nuclear arsenals. It was in 1945 that two scientists involved in the Manhattan Project, which developed the first atomic bombs, founded the association, no longer able to ignore the consequences of their work.

Trump is not the only one responsible for this resounding change in the position of the second hand—but he’s certainly a contributing factor. The scientists justify their repositioning of the clock to be 2 1/2 minutes away from midnight by explaining that the results of their analysis are multidisciplinary in nature. The team that carries out this annual evaluation – which includes scientists in areas as diverse as oceanography, meteorology, international relations and physics, among others – looks at those long-term trends, which affect humanity, including global warming, the proliferation of weapons of mass destruction or other threats that spring from emerging technological advances, as reflected in the interference in the U.S. presidential election and the false news being circulated around social media. In the absence of oversight and policies designed to lessen the impact of these “campaigns,” democracy itself will be that which is affected—with unforeseen consequences for the global order.

The post-World War II world, which was built around the principles of market economics, human rights and democracy, is being questioned like never before in the past seven decades. One of the most recent signs of this assault on the post-World War II order has been the announcement made by the African Union withdrawing its state members from the treaty underpinning the International Criminal Court, the United Nations body which was established to deal with genocide and crimes against humanity. Values once considered secure, seen as signs of humanity’s progress, are now being called into question – and not only because of Trump.

What is evident is that the “minutes” comprising this imaginary clock are not precise calculations but rather approximations. When one looks into the future, there are never any certainties, as it’s not an exact science. There are, however, trends, indicators and facts. The minutes on the clock are thus a glimpse at, or a statement regarding, the world’s current state of health, while also serving as an expression that characterizes international relations. And the minutes must be read in context by comparing them with data from earlier years.

This year, we are experiencing a situation that, in the overall scheme of things, shows how the world has grown more dangerous. This explains why, for example, so many U.S. businesspeople – many of whom have made their fortune in Silicon Valley technology – are in search of homes in New Zealand; they hope to move there just in case everything in the U.S. goes up in smoke. (The New Yorker recently dedicated a lengthy article to this subject, which, said differently, is about what the super-wealthy are doing to prepare themselves for the day after the apocalypse.)

The world – that is to say, relations between states, something more commonly referred to as “international relations” – is like a living entity in search of balance; unstable and constantly in a state of agitation, it moves from one side to the other in order to maintain equilibrium. Like a trapeze artist hanging from a rope, who seemingly could fall at any moment, international relations are perpetually in a state of tension. Any alteration made to the pieces of this gigantic puzzle has an effect on all of the others, which must adapt, reposition themselves and move.

What is being seen is that, at the global level, there is little stability, much less than before Trump’s election. Look, for example, at the European Union, which, bearing in mind the uncertainty emanating from the other side of the Atlantic, brought together its heads of state and heads of government this past weekend in Malta in order to debate the future of the union itself. In questioning everything that, up until now, has been a certainty, the new U.S. president has brought a very large dose of unpredictability to global relations, something that’s made tensions rise among everyone.

At this point, the mere flap of a butterfly’s wings somewhere and sometime could provoke a chain reaction of cataclysmic proportions. And it’s for this reason that the countdown clock was moved up to 2 1/2 minutes from “midnight.”