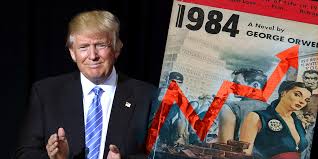 One day in June 1949, prominent historian and political thinker Isaac Deutscher, author of the famous three-volume biography of Leo Trotsky, was walking around London. His gaze fell upon a bookstore window in which George Orwell’s recently released novel, “1984,” was displayed. Suddenly, Deutscher was approached by a modestly dressed man, who implored him, “Have you read this book? You must read it, sir. Then you will know why we must drop the atom bomb on the Bolshies!” [Isaac Deutscher, “Heretics and Renegades,” see, “1984 —The Mysticism of Cruelty,”(1955)]

Over the span of many years, Orwell’s novel was received primarily as a dystopia, exposing Soviet totalitarianism in the USSR. It was translated and published by Progress publishers in limited numbers for the Soviet party elite. Ordinary citizens were not meant to get acquainted with the book.

At the beginning of perestroika, it seemed to many that this novel, imagined by a genius author, a bleak portrait of a totalitarian government, was being relegated to the history books. The whole world was soon gripped by a wave of democratization; totalitarian and authoritarian regimes crumbled left and right. Later though, it turned out that some components of the Orwellian dystopia became a part of life in liberal democracies, such as mass surveillance of citizens, tolerance for totalitarian ideology, and political correctness. It’s not surprising that people continued reading “1984.”

Just recently, there was renewed interest in the novel. In the U.S., its sales reached record numbers. It turns out that this was caused by a rather strange circumstance. Trying to defend White House Press Secretary Sean Spicer against accusations that he lied, presidential adviser Kellyanne Conway declared that he hadn’t lied, but was merely stating “alternative facts.” Pundits immediately invoked Orwell’s Oceania, where facts are what the party says they are at any given moment, even if that contradicts what the party was saying an hour ago and contradicts objective reality. The term “post-truth” has become popularized, which translates to a surreal world created by politicians in their own interests. Donald Trump is, of course, the first person that comes to mind.

I have no intention of being an advocate for the American president. He really does have a willful attitude toward facts, even though he has been president for 50 days already. It’s time to draw some preliminary conclusions.

At his recent press conference, Trump stated that he got more electoral votes than any other president after Ronald Reagan. One journalist immediately caught Trump in a lie. Both Barack Obama and George Bush Jr. received more electoral votes than Trump did, and Trump himself could not remember how many votes he had received. In addition to that, for some reason Trump asserts again and again that there were more people at his inauguration than at Obama’s second inauguration, which is easily disproved by photos from the scene. It is completely baffling, too, why he needed to make statements about how, supposedly, during the last election, 3 million to 5 million illegal immigrants voted for his opponent, Hillary Clinton. It’s not like anyone is casting doubt on the legality of his election.

All of this gave the leading American press outlets cause to mount an endless and grand campaign presenting Trump as the “archenemy of truth,” unworthy of occupying the post of president of the United States, offering supposition about possible psychological illness, and demanding his speedy resignation. From this campaign, one might conclude that before Trump, the U.S. was a bastion of truth and that the scions of this truth were then and still remain publications like The Washington Post, The New York Times, The New Yorker, et al. In addition, as asserted by Trump critics, including Republicans (Sen. John McCain, e.g.), there is a grave threat to freedom of the press.

Not everyone shares this opinion. For instance, Patrick Buchanan, the longtime American political critic and former adviser to Ronald Reagan, thinks that the leading American press not only consciously deceives the public (first and foremost about Russia), but also seeks to inflame Russophobia and anti-Putin paranoia, so as to make normalizing relations between our countries impossible. The urge to corner Russia, he thinks, could lead to a new cold war, which will not necessarily end as well for the U.S. as the first one.

As Americans themselves like to say, freedom of speech doesn’t mean the freedom to yell “Fire!” in a crowded theater, just like it doesn’t mean that you get the opportunity to slander the presidents of other countries and mix them up with your own scandals, and nor that you get to present as proof of such slander a dossier with kompromat* put together by an unknown source and then talk about the “high probability” of Russian interference in the American election process. This “high level of probability” is like Bulgakov’s “sturgeon of secondary freshness.”** If we are talking about a proven fact, then the probability is 100 percent, and if it is not 100 percent, then it means that it is not a fact. In the best case, it is a supposition, and in the worst, gossip. This gossip is by no means harmless.

History bears witness to incidents where a careless word or a purposefully spread falsehood led to war, coups, slaughter and other terrible disasters. However, in the old days, information spread slowly and reaction to it was equally slow. Even in those instances when, for instance, U.S. and Soviet early warning systems indicated a supposed first nuclear strike by the enemy, the responsible parties had time to check that information before making a fateful decision.

Today, bursts of information reach their target almost instantly, and this could have irreversible consequences. This is perhaps why Trump called fake news the “enemy of the people.” The quote is, of course, ominous, that goes without saying. However, Trump’s words were presented as if he were calling the press as a whole the “enemy of the people,” not fake news. At the Conservative Political Action Conference, Trump had to elaborate that this was not what he meant at all, and that he, like no one else, embraces the First Amendment, which guarantees freedom of speech.

It seems, however, that the enmity between Trump and the opposition press has already crossed a certain line, beyond which reconciliation is rather difficult. This is extremely harmful to the government and to society.

Of course, it’s not my business to give advice to American journalists. But I still would hope that the more responsible and authoritative among their rank will find the courage to end the information war with the president of their own country, and might also look at Russia more objectively and in depth. The rebirth of Reagan’s idea of the “evil empire” in completely different circumstances can hardly be fruitful.

As far as Trump goes, he would probably do well to understand that one cannot “defeat” the press in a liberal democracy, and if he doesn’t want even bigger problems, he will have to seek reconciliation.

*Editors Note: In Russian politics, “Kompromat” is defined as compromising materials about a politician or other public figure used to embarrass or blackmail.

**Editor’s note: This a reference to a description by Bulgakov in his book “The Master and Margarita.”