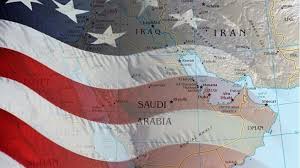 It’s already been 100 days since the eccentric Donald Trump became president of the United States. And thus, it’s already been three months since the global community began trying to guess and predict the next step of the billionaire who is now in charge of the Oval Office.

It is believed that the most powerful countries in the world tend to interfere in the deals of the Middle East. That’s the way it is. We see interventions, counterterrorism operations (so-called ones and real ones, too), drone strikes, support of the opposition, and pressure on government authorities, and vice versa.

Meanwhile, countries of the Middle East region, previously just subjects of world politics, have turned into real actors themselves. For example, Saudi Arabia, Qatar, and Israel have a significant influence on the decision-making process in the United States, France and Great Britain. Times have changed, and this is not just a saying. You can avoid the Middle East, ignore it or even forget about it. But the region itself involves the most powerful countries and sucks them into a knot of contradictions, from which it’s difficult to get out.

Trump repeatedly said that he does not need the Middle East, that America only suffers from being in this region. But he has underestimated its importance. While you are president, you can try to get the country out of this region and dedicate your entire time to domestic problems. But is it possible to do so? Will the region let you go? Will the establishment, the oil companies, the military-industrial complex, the think tanks, the military, the special services, experts and journalists agree to this?

Inertia is a very strong factor in politics. It cannot be taken seriously, but it’s still floating around invisibly, causing you to make one decision or another. Inertia gives rise to the continuity of U.S. policy in the Middle East with its positive and negative qualities. Whoever is in power, Democrats or Republicans, you can always find elements of continuity. For a long time, the United States was a monopolist in this region, and independently determined the format and mechanisms of Middle Eastern reality.

Times have changed. Those who historically urged multipolarity apparently got it. At least in the Middle East. It would seem that happiness for them has come: “The Washington Obkom*” can no longer decide the fate of the region.* But why is it still so complicated? Why are there even more wars, acts of terrorism and violence?

Because everything is complicated to the limit. The number of players in Syria, Afghanistan or Iraq does not match the number of fingers on one hand. Everyone has his own agenda, interests and recipes.

In early April, in response to the use of chemical weapons in Syria, the United State launched a missile strike to the government military base Shayrat. Trump released Tomahawk missiles on a half-empty, Syrian air base, which is the size of several football fields. It was unexpected. Nobody ever imagined that the leader in the White House, who claims that it is possible to work with Assad to combat the Islamic State, would decide to do so. Moreover, the action had no strategic or even significant tactical value.

The Tomahawk fireworks showed that Trump’s allergy to military actions and the Middle East has disappeared. Trump, who insisted that with him, the U.S. would stay away from the Middle East, took a step that his predecessor, Obama, who did not even make such statements, did not dare to take.

It was obvious to me from the beginning that, first of all, he was not a pacifist whatsoever, and second, that the Middle East itself will find Trump.

There is no doubt that the U.S. president’s policy will be transformed. Those things that Trump said during the election campaign and things that he will make come true will not be the same things. This was early Trump. Some 100 days later, he was replaced by an average Trump.

It’s a common rule for all U.S. presidents. The interests of the colossal number of countries, companies, elites and power groups are intertwined in the Middle East. For example, can the influential U.S. military, the military-industrial complex and special services close the Middle East history of the United States? In the history of America, there has been no administration to which the military had such a huge influence, as it does on Trump’s team.

The thoughtful adviser on national security, H. R. McMaster, fought in Afghanistan and is in no way going to leave the region. The head of the Pentagon, Defense Secretary James Mattis, is a theorist and practitioner of the insurgency, which has been in Iraq and Afghanistan for decades. Secretary of State Rex Tillerson is through and through an oil worker, who worked all his life at ExxonMobil, which has interests in Saudi Arabia, Qatar and other countries in the region. There are people in the Trump administration who are close to the Israeli establishment. For them, the U.S. withdrawal is a catastrophe on a universal scale. So how is this possible?

Suppose that Trump’s dream comes true and the United States leaves the Middle East. In Iraq and Afghanistan, there is no U.S. military. Washington does not engage in Syria, does not support Israel, leaves the rich and small monarchies of the Persian Gulf alone, and the White House stops pressuring Iran.

There is absolutely no guarantee that peace and prosperity will immediately come about. The American presence and activity in the region are not always negative. Let’s take a look at Afghanistan, for example. If the United States withdraws its almost 10,000 troops from this long-suffering country, civil war will break out right away with renewed vigor. The Taliban will not immediately come to power but will strengthen its presence, de facto replacing official authorities in most provinces. Who needs it?

The Trump administration does not appear to be interventionist. Defense Secretary Mattis for all his toughness is not like Donald Rumsfeld, and Vice President Pence is certainly not a radical interventionist like Dick Cheney. But is there a risk that they might become like them? After all, Bush’s entourage really only went into action after the 9/11attacks. Today it seems that completely different people are sitting in Washington. Yes, and thank God events like terrorist acts in the United States are unlikely. Obviously, Trump is becoming a classic and normal Republican president. The Middle East will not let Trump and the United States go.

Today, regional actors need Washington (and its big stick) more than ever. Everyone decides on their questions and conducts their own game. Saudi Arabia and Qatar have increased influence within Washington. Riyadh and Doha sponsor the influential “think tanks,” which, to put it mildly, play an important role in the process of political decision-making.

And the powers to implement and plan policies in Iraq, Syria and Afghanistan are increasingly focused in the hands of the Pentagon, the CIA and the National Security Council. The Middle East will not let the U.S. go, but how Trump and his team will react to it is unclear. It is hoped that the region will not return to the old and still not forgotten state, the way it was under President Bush.

*Translator’s Note – The Washington Obkom, literally the Washington Province Party Committee, is a pejorative term used in Russian media and speech to imply that many crucial decisions by political elites of Russia, and some other post-Soviet states, have been agreed with and/or taken in the United States. The term incorporates two incompatible symbols of power: “Washington D.C.” as the symbol of the US administration, and “obkom” symbolizing the power of the Communist Party.

*Editor’s note: The Washington Obkom is a pejorative term used in Russian media and speech to imply that many crucial decisions by political elites of Russia and some other post-Soviet states have been and are agreed with in the United States.