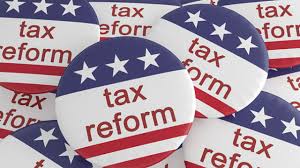 If the United States’ tax reform proposal had no chance of passing, I would not bother to analyze it. But that’s not the case. The probability of passing is high. It would be advisable to look at its effects in the U.S. and internationally.

Although the proposal is missing many details, the following stands out: it reduces the tax on businesses from 35 percent to 15 percent; it reduces the progressive tax scale of citizens to only three categories: 10 percent, 25 percent, and 35 percent (currently, the tax goes as high as nearly 40 percent); it abandons the idea of global income in order to embrace territorial income (like in Costa Rica); it eliminates nearly all deductions from gross income, including deductions for interest, and excepting expenses for home mortgages and charitable contributions; and it also eliminates the inheritance tax, currently at 40 percent.

The principal effect would be to increase the income of taxpayers in order to increase consumer spending and investment. This would increase the aggregate demand, stimulate growth, employment, and salaries (to bring the work force closer to being fully employed), but would increase the fiscal deficit and, perhaps, the taxes on interest income, although these are aspects of the tax reform proposal that have not yet been quantified. It would improve the tax structure to reduce exemptions, deductions, and exclusions, reduce conflicting interpretations with respect to the assignment of resources, and improve productivity.

The primary criticism is that the plan would not be neutral against the fiscal deficit, as the lowering of taxes would not necessarily balance out with the greater taxes generated by economic growth (supply side economics), as happened in Reagan’s administration. The counterargument is that, although Reagan won the presidency, the Democrats retook Congress and the Senate and had no method to reduce spending, and due to this, the deficit increased. Now the situation is different. There will be reductions to costly Democratic expenses and, if Obama’s health care law is repealed, there will be substantial savings.

I believe that the tax reform proposal is good. It would increase growth and employment in the U.S., and, most importantly, would inspire the rest of the world to effect similar reforms in order to be competitive. In Costa Rica, the pressure would be twice as strong: the corporate tax would have to be lowered again from 30 percent to 15 percent, and there would be pressure not to impose the worldwide tax and to lower the spending more substantially to finance the deficit. My worry, however, is based on the effect the proposal will have on the movement of capital, as it could affect exchange rate values.