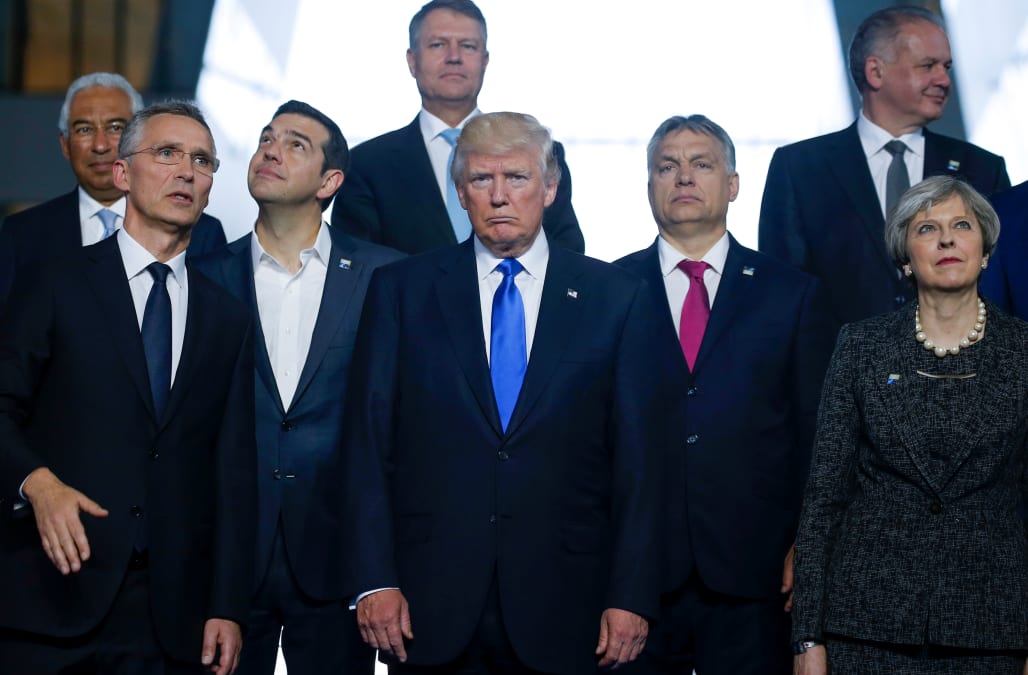 During the final day of the Group of Seven leading industrial nations’ meeting in Sicily, the conflict between the U.S. and the other six countries was clearly showing. In the summarizing document, it is written in black and white how Donald Trump is isolated and is the only one of the leaders not supporting the 2015 Paris Agreement on climate change.

The president of the U.S. declared that he had not yet made up his mind on whether he should support the Paris Agreement, which he promised to get rid of during his election campaign, and that his decision would be announced next week once he had returned to the White House.

During the two days at the Sicilian tourist resort, the other G7 country leaders intensely lobbied the American president on the climate issue. Trump’s economic advisor, Gary Cohn, explained that the president’s view on the topic was “developing” – in what way is unclear.

However, German Chancellor Angela Merkel, did not appear optimistic and announced that the discussions around the climate crisis were “very difficult, if not to say very dissatisfying.”

On only one point has Trump appeared to have adopted the European view. Where before he had been very skeptical about sanctions against Russia, in the final statements he agreed to the G7 countries keeping sanctions in place because of Moscow’s actions in Ukraine and even tightening them “as necessary.”

The president’s foreign expedition was seen by many in the administration, and possibly by Trump himself, as a welcome break from the daily onslaught of Russia-related scandals currently involving his son-in-law and senior adviser, Jared Kushner, which takes the investigation all the way into Trump’s family.

On Saturday, Air Force One took off from Sicily to Washington after Trump’s nine days of foreign travel. When he lands, a large pile of unsolved problems and a never-ending stream of new revelations about unusual contacts between those close to Trump and Russian representatives are waiting for him.

During his speech at the naval air station in Sigonella, Italy, Trump called his first foreign trip an enormous success. (He used the baseball term ”home run.”)

How the trip should be evaluated must, of course, be compared to the expectations. Expectations weren’t especially high, particularly bearing in mind that Trump is lacking some basic knowledge of international affairs. Instead, the measure of success for the trip was reduced to, “As long as he doesn’t make a catastrophic error or tweet something idiotic.” It doesn’t appear that these worst-case scenarios became reality.

But what did Trump really accomplish? Nothing concrete. Trump did not come to an agreement with the other heads of state and government leaders on any serious global political issues.

In Saudi Arabia, he met the “wise leader” King Salman and could bask in the glory of selling $110 billion worth of American weapons to the oil country. The underlying message was different: The U.S. lent its unconditional support to Saudi Arabia and the Sunni Muslims over Iran and the Shia Muslims.

There was only one potentially contentious point, which occurred when, in a speech on Islam, Trump called for Arab leaders to drive out the terrorists, stop financing terrorism and fight the export of radical ideologies.

What he neglected to say was that it is rich Saudis, many with connections to the royal family, who ideologically and financially back the spread of Wahabism, i.e., the extreme form of Islam, in the world. He also didn’t mention the fact that almost all jihadi terrorism in the Western world is committed by radical Sunnis, not Shiites.

Prior to the visit to Israel and the West Bank, Trump had said that he could help in solving the Israeli-Palestinian conflict (which is “not as difficult as people have thought,” according to Trump) and was welcomed with enthusiasm by Benjamin Netanyahu and politely by Mahmoud Abbas. In terms of any rapprochement between the two sides, there was no sign.

Even if the two visits in the Middle East offered little in the form of substance, they were at least greeted with smiles. A remarkable contrast to the dour expressions in Brussels and Taormina.

In Saudi Arabia, Trump had declared that he was not going to lecture the country’s leaders on human rights. However, the United State’s most important allies in NATO got a lecture for not spending enough money on defense.

The focus of the foreign trip ended up being what Trump didn’t say or do. He didn’t mention Saudi Arabia’s brutal human rights offenses. He didn’t give any clarity regarding his election promise to move the American Embassy in Israel from Tel Aviv to Jerusalem. He didn’t expressly give his support for NATO’s Article 5, guaranteeing security for any member of the alliance that is attacked. And, finally, he did not provide any clarity on whether the U.S. will remain in the Paris Agreement on climate change.

It is highly unlikely that Trump’s trip will have any substantial impact at home, good or bad. On the home front, the topics of discussion are completely different. They are primarily Trump’s ability to deliver at least one of his key election promises, be it the repealing of former President Obama’s health care law, the implementation of tax reforms, the building of the Mexico border wall or stopping Muslim immigration. A large part of this failure can be chalked up to the ever-present “Kremlingate.”

The political consequences of Trump’s condescending and hostile treatment of the United States’ closest allies in Europe on the world stage are much greater. The picture of the frosty glances between Trump and the European leaders at the NATO meeting in Brussels showed how far down the road the political meltdown in the Western world has gone.

Richard Haass, president of the Council on Foreign Relations in the U.S., had a clear view on what NATO’s obvious divisions mean: “There is no doubt this is yet another good day for Vladimir Putin.”*

* Editor’s note: The original quotation, accurately translated, could not be verified.