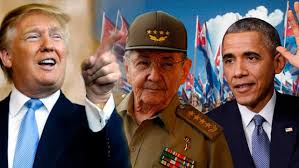 i>The partial retreat in Washington’s relations with Havana is a serious mistake.

The partial retreat, announced yesterday by Donald Trump, from the process of normalization between the U.S. and Cuba, initiated 30 months ago by his predecessor in the White House, Barack Obama, is a grave strategic and political error which will not benefit the citizens of either of the two countries and will negatively affect future attempts.

No matter how hard they try to present this as a triumph for human rights and liberty, this involution by Trump will not succeed in improving the conditions of the lives of people who live under the Castro regime. On the contrary, it is a perfect excuse for the Cuban dictator to further his desire to perpetuate the system.

President Obama understood this perfectly, and when he announced the historic normalization agreement between Washington and Havana on Dec. 17, 2014, he acknowledged the unproductiveness of the methods of pressure adopted since 1962. Among the absolutely useless measures to democratize the island, the best known is the embargo – which can only be revoked by Congress, something which has not happened in the last 55 years – but also other measures which Trump wants to restore, such as, for example, the travel limit.

It is true that during these months of normalization, the Castro regime did not adopt real measures of openness, but this cannot justify returning to a strategy which for decades proved itself to be useless.

Due to the ineffectiveness of the measures on which Trump is betting in terms of the democratization of Cuba, it is necessary to look for an explanation in the concessions to the most radical sectors of the Cuban-American electorate of Florida, a state important for Trump’s victory. As a good populist, Trump’s priority is neither for the long term, nor the good of all, but just to satisfy his supporters.