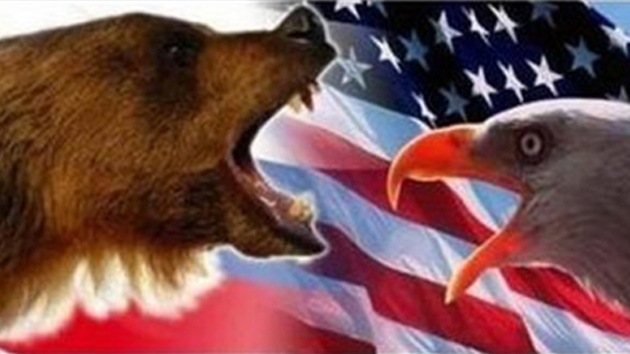 In a recent poll by the Levada Center, 69 percent of the Russian population called the U.S. the country most hostile toward Russia. In the pages of Argumenti i Fakti, you should tell us where such enmity comes from, on the part of Russians toward the world’s most developed country, the technological and intellectual leader of modern civilization. Isn’t it time to stop making a horror story out of America, and scaring the children?

Colonel General Fyodor Ladygin, Chief of the GRU* of the General Staff of Russia’s armed forces from 1992-1997, responds:

The United States is, of course, the most economically and technologically developed country. However, one should specify that it’s the most developed country for now, given that China is catching up to it. As for “intellectual leadership,” and along with it the international ethics demonstrated by U.S. ruling circles, it’s highly problematic to relate them to a notion of “modern civilization.”

I’d like to point out that in 1987, a document called the National Security Strategy came into existence in the U.S. It’s prepared by the National Security Council, approved by the president, and presented to Congress, together with the federal budget proposal, in classified and unclassified versions. Under different presidents, some of its positions are revised and adapted to new realities, but one thing remains unchanged across all editions of the strategy − the primacy of U.S. vital interests in the country’s entire foreign and military policy.

It’s well known that immediately after the end of World War II, the United States declared the whole world to be zoned into so-called important, extremely important, or vital U.S. interests. And to “defend,” or to be more precise, to promote these interests, Washington gave itself the exclusive right to use its entire toolkit of influence on other countries, including its “unmatched military might.”

As a result, the U.S. keeps its armed forces, which are constantly in a high state of combat readiness, throughout the entire world in so-called unified combatant commands, which have been created, deployed and trained to carry out tasks in future theaters of war that have been “pre-cut” on all continents and bodies of water. In other words, the entire population of the earth today lives in territories of vital U.S. interests, for the “defense” of which at any moment a concrete U.S. military structure has already been allocated. Even Antarctica, with its penguins, falls into one of the Americans’ zones of responsibility.

Every country in the world is located within the U.S. UCC zones of responsibility. That is, for Washington, foreign countries aren’t subjects of international law but rather potential objects of coercive military influence. Over 90 percent of the U.S. war machine is designated not for the defense of the country’s own territory and population, not for ensuring its security, but exclusively for conducting military operations on the territory of any other country in the world with a regime that’s out of favor with Washington.

Could a sensible Russian citizen be smitten with love for America, while looking at a political map on which his homeland, together with the seas washing against it, are designated by Washington as a potential theater of military operations for the U.S. UCC in the European zone, in conjunction with troops of other NATO countries?

Here’s what I would pay attention to. In March 2014, with reference to the threat to the lives of Crimea’s population and possible provocations against Russia’s Black Sea Fleet in Sevastopol that actually cropped up after the coup in Kiev, President Putin called upon the Federation Council to give him, as Supreme Commander-in-Chief, the option of temporarily deploying a contingent of Russian troops to foreign territory. Yet this isn’t required of the U.S. president: He has the right, following some kind of “consultation” with members of Congress, to use his armed forces against any country, and only afterwards notify Congress.

According to data published in the early 1980s by American researchers themselves, in the span of 38 years, the U.S. took part in 215 international crises, including the wars in Korea and Vietnam. Notably, in that period, Democrats were in power in the White House for 20 years and Republicans for 18 years. And then there were the aggressions against Grenada (1983); Panama (1989); Yugoslavia (1999); Iraq (2003); Libya (an air strike in 1986 and a large-scale operation in 2011); and this is far from the full list of unprovoked U.S. wars and military actions over just the last 30 years.

At the same time, it is important to note that during the Cold War and the confrontation with the Soviet Union, the Americans displayed, if not restraint, then at least a certain caution with regard to countries friendly to us. Now they’ve discarded this “shyness” in relation to other countries, excluding Russia and China as major nuclear powers.

In the latest edition (2015), the U.S. National Security Strategy** reaffirms the sanctity of the aggressive, essentially hegemonic U.S. foreign policy and its preservation moving forward. To me it was strange to see some of our lawmakers, and even leaders of Duma factions, rejoicing at Trump’s victory. It’s obvious that it isn’t the president—whether Bush, Clinton, Obama, etc.— who determines U.S. foreign policy. He’s merely the conductor of a Washington foreign policy shaped by the ruling elite of the American establishment.

In conclusion, I would note that in the course of planning nuclear war against Russia—and there’s no special secret here—the American leadership views a preventive, pre-emptive strike as the primary method of using its strategic offensive forces. At the same time, in U.S. plans, the term “retaliatory nuclear strike” isn’t contemplated; it’s simply rejected by American military doctrine. The U.S. considers even a counterstrike undesirable.

All of this requires the responsible leadership of Russia not to think about liking or not liking America, but to ensure the guaranteed security of its people and its country, and to prevent any aggression against Russia, no matter who it comes from.

**Editor’s note: The National Security Strategy is a document prepared by the executive branch for Congress, which outlines the major national security concerns of the U.S. and how the administration plans to deal with them.