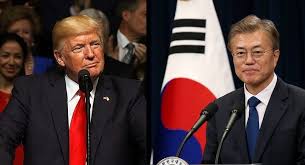 Otto Warmbier, a U.S. college student released in a coma after 17 months of captivity in North Korea, died Monday, June 19. This was just six days after his return home on the 13th to Cincinnati, Ohio, after repeated efforts from the U.S. to secure his release. The news of his death has drastically affected the U.S. public opinion of North Korea.

“The United States once again condemns the brutality of the North Korean regime as we mourn its latest victim,” U.S. President Donald Trump said in an official statement, shortly after Warmbier’s passing. Sen. John McCain, chairman of the Senate Armed Services Committee, also claimed that Warmbier was “murdered by the Kim Jong Un regime” and argued, “The United States of America cannot and should not tolerate the murder of its citizens by hostile powers.” Outrage has flooded in from the Democrats, civilian groups, and citizens on social networks who are condemning North Korea. President Moon Jae In sent his condolences to Warmbier’s family on the same day, and both the ruling and opposition parties in South Korea are criticizing the inhumane actions of the North.

Warmbier’s death is predicted to be an obstacle in the summit to be held just eight days from now. The U.S. hasn’t been embracing South Korea’s policy on the deployment of the Terminal High Altitude Area Defense system, and several negative events, including this recent tragedy, have simultaneously taken place, putting negative pressure on the South Korea-U.S. summit. South Korea’s unwelcoming attitude toward several of the United States’ major political figures, as well as the statement made by Moon Jung In, President Moon Jae In’s special envoy for reunification, that reducing North Korea’s nuclear weapons and missiles can reduce strategic assets on the Korean Peninsula and the joint training of the American and South Korean troops, is raising concerns for discord between the U.S. and South Korea on the North Korean issue.

At this summit, the basic framework for bilateral relations, especially with regard to cooperation on the North Korean issue, will be determined for the next five years that President Moon Jae In will be in office. It seems that South Korea’s push for “dialogue” with North Korea, and the U.S.’s unfavorable sentiments toward North Korea triggered by Warmbier’s death, will make it hard for the two nations to find a compromise. In the time remaining until the summit, the Blue House needs to focus on preparing as much as it can toward resolving security concerns.

Editor’s Note: This article was written prior to the meeting between South Korea’s president and President Donald Trump in Washington, D.C., last month, but the editors believe its concerns remain relevant.