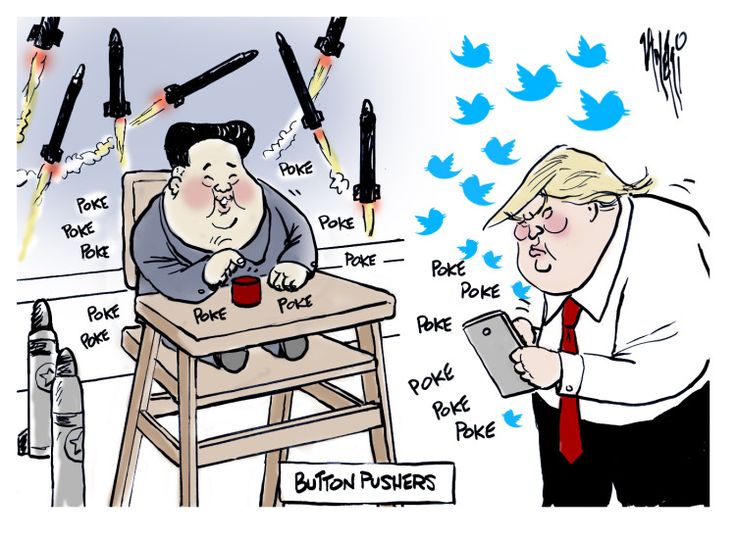 Politically speaking, Donald Trump is a numbskull. At the White House, he acts as if he were still the star bully of a TV show. His supporters think that this is wonderful. Many others instead see Trump as the shameful and dangerous incarnation of that part of America that is rightfully the object of much judgment and many negative views, both in the U.S. as well as in the rest of the world.

This has been common knowledge for a long time, and people should actually not get upset over every single dumb tweet made by the bleached blond. However, it would be better if Trump did not constantly validate the negative views about him, which end up affecting all Americans. It is an injustice, at least toward the majority that did not vote for him.

With his latest message, Trump has further stooped past his abysmal level. The president let the North Korean dictator and the world know that his “nuclear button” is “much bigger & more powerful” than Kim Jong Un’s.

This kind of mentality and wording is reminiscent of the “Lemon Popsicle”* movies from the late 70s and the 80s, in which young men made the sort of comparisons young men sometimes make with each other. (The fact that Trump phenotypically bears a certain resemblance to Zachi Noy, one of the actors from “Lemon Popsicle,” is certainly pure coincidence, though possibly offensive to Noy.)

Someone Who Does Such a Thing Is a Numbskull

Unfortunately, the situation is not as funny as the many tweets and memes commenting on it make it out to be. Trump does have at his disposal a nuclear arsenal that could destroy the world. Any chatter about it should be out of the question. Carelessly tweeting a nuclear threat against a dictator who is under no control from a parliament, an opposition or courts in his own country is gravely dangerous because it can only fuel Kim’s delusions of being persecuted and surrounded.

There are quite a few possible ways to deal with a dictator who feels backed into a corner, none of which is good. Still, not one of them is as bad as the threat of a devastating nuclear war, hastily sent via smartphone. Someone who does such a thing is a numbskull, politically and otherwise.

*Editor’s Note: “Lemon Popsicle” is a 1978 West German-Israeli film with a cult following that led to a series of sequels.