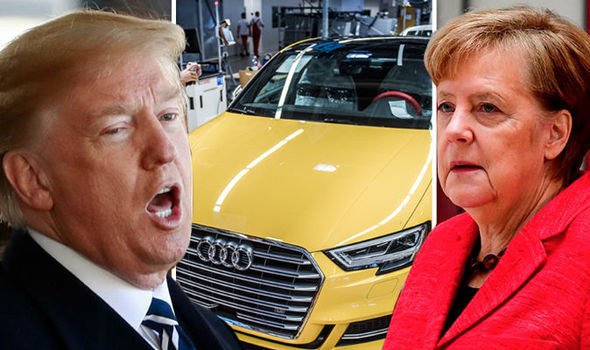 After imposing protective tariffs on steel and aluminum, the president has now taken the car industry to task, an industry that is so important to Germany. Europeans must join forces and come up with a joint response.

It could always be worse, as the saying goes. This is being demonstrated on an almost daily basis by someone whose very office should inspire greater foresight and diplomatic instinct: Donald Trump. Only on Thursday, the president dealt a brutal blow to European trading partners with his announcement that he really is serious about the dreaded protective tariffs on steel and aluminum.

He didn’t leave his opponents much time to recover while they were down. In response to the rather moderate reply from Jean-Claude Juncker, president of the European Commission, who only promised a “decisive reaction,” Trump came back with a threat of additional duties for the car industry. Like a bully in the playground, he dealt his opponent a further blow while they were fighting for breath.

With this punch, the president has now definitely gone beyond what is acceptable – for all those involved. Import duties on imported cars from the European Union wouldn’t just strike right at the heart of the key German industry; there are all the suppliers and hundreds of thousands of jobs as well.

It would also affect American car manufacturers, some of which produce cars outside of their domestic market themselves, and therefore, precisely those people Trump wants to protect with his America First policy, not to mention car buyers, who will feel the whims of the president in the form of higher prices on this side as well as the other side of the Atlantic.

Given the recent escalation in this nascent trade war, which has what it takes to send the global economy down, Germany has a powerful weapon: Europe. In times like these, when not just one global superpower, the U.S., is upsetting traditional alliances, but the second superpower, China, is deploying billions to expand its influence, Germany risks being pulverized. To prevent this, the Europeans must join forces and come up with a joint response.