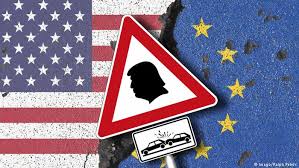 The U.S. president wants to reduce the trade deficit of the U.S. with punitive tariffs – even if it is not clear if that will work

An “A deficit is bad and others are at fault” approach can be greatly misused for one’s own purposes.

However, this misunderstanding, together with the announcement of punitive tariffs, could have devastating consequences for the U.S.

The argument sounds logical and tempting: In the past year, the United States of America had the highest trade deficit since the financial crisis − $566 billion, and with that, 12 percent more than the previous year. That can only be due to the unfair trade practices of America’s trade partners. Therefore, it is only right and fair if President Donald Trump levies punitive tariffs on steel and aluminum, places the free trade agreement with Mexico and Canada, NAFTA, into question and thus provides for a bit of justice. That, anyway, is the logic of “America First.”

Most economists agree that this argument is completely wrong. Trade deficits cannot be reduced by tariffs because such levies first and foremost simply bring about rising prices for the taxed product in the country that imposed the tariff. Concretely: For car and aircraft manufacturers, steel and aluminum will become more expensive if the announced tariffs are enacted. No one can say how that will affect the trade balance.

It is not even clear if it is desirable from the American perspective to reduce the deficit. The bottom line of the trade balance is only an accounting figure that by itself says nothing about whether a country is doing well or poorly. But the number can be greatly misused, on Twitter, on television and in an election campaign: A deficit is bad and the others are at fault. “When a country (USA) is losing many billions of dollars on trade with virtually every country it does business with, trade wars are good, and easy to win.” This tweet of the American president could go down in history as possibly the most concise circumlocution of such misunderstanding, which stands behind the fixation on trade deficits.

The misunderstanding that has become ingrained in the minds of Trump and some of his advisers could have devastating consequences: the departure from a multilateral, regulations-based world economic order. The announcements of the new tariffs this week would then mark the beginning of the end of this order.

From Trump’s Viewpoint, Germany Ranks among the Offenders

The trade deficit of the United States has two causes that are mutually dependent. First, the Americans consume and invest more than they save. Second, the American capital market is highly attractive, which is why foreigners are eager to invest their money in the United States. That is especially conspicuous in the example of China. Compared to the People’s Republic, the U.S. has the highest bilateral trade deficit of all nations at $375 billion. A substantial part of the deficit is financed through the purchase of American government bonds by the Chinese and Chinese government. At the end of 2017, debt securities worth $1.5 trillion were in the hands of the Chinese, 13 percent more than the year before.

The government in Washington is thus dependent on the regime in Beijing to finance its budget. In spite of this, Trump attacks the People’s Republic because of its trade surplus. From Trump’s viewpoint, Germany also ranks among the offenders. The deficit of the United States in trade with the Federal Republic stands in fourth place at $64.3 billion. Trump and his advisers have also accused their German ally of unfair practices. That is totally unjustified, says Wüzrburg economics professor Peter Bofinger, member of the German Council of Economic Experts, who often criticized the German federal government for its austerity policies and export surpluses. “We now have 2 percent growth, the wages are rising, so one cannot reproach the Germans.” That is to say, it’s not the Germans’ fault when the inequality in mutual trade has only lessened a little.

The U.S. trade deficit might rise further in the near future. The reason is Trump’s tax reform. It will raise the national debt by around $1.5 trillion in the coming 10 years, according to an estimate by Congress. Because Americans might not save at the same rate, the reform must primarily be financed abroad. If the president wants to proceed against it with tariffs, dangerous times lie ahead for the world.

In the World Trade Organization, which is supposed to secure free trade around the globe, worries are growing. “We are very concerned,” Deputy Director-General Karl Brauner, of the WTO in Geneva, told the Süddeutsche Zeitung on Tuesday. “The concern is that every action of the U.S. triggers a reaction so that we could come into a real trade war. That would be a catastrophe.” Previously, WTO General Director Roberto Azevêdo warned, “An eye for eye will leave us all blind and the world in a deep recession.” All efforts must be undertaken to prevent the first domino from falling. There is still time for that. All parties must work around the situation very carefully.

The WTO Itself Is Substantially Weakened

Deputy-Director Brauner brings to mind in this context the disagreement between Europe and the United States about European tariffs on American chicken meat in the 60s, the infamous “chicken war.” That led to tariffs being levied on cars – and they are still in effect today, an example of unintended secondary effects of trade wars. In the meantime, U.S. Commerce Secretary Wilbur Ross indicated that his country does not want a trade war.

In the meantime, the WTO itself is substantially weakened so that there are doubts about whether the Geneva organization is even still in a position to settle the looming trade war. The 164 members of the WTO have already failed in the ambitious project started in 2001 to negotiate a round of tariff liberalization for developing counties. Now the United States has virtually dodged its moral support of the WTO – and without this support, the WTO cannot function.

Because of American policies, for example, the WTO courts of arbitration are gradually becoming incapable of working. Currently, only four of seven seats in the Appellate Body in Geneva are occupied because the U.S. has nominated no new members. If the EU should aim for de-escalation in the tariff dispute and initially not levy retaliatory tariffs, but instead call for a WTO arbitration, the hour of truth could come. First, it would be doubtful if the court can convene and second, whether the Trump administration would even submit to the decision.

Rolf Langhammer, economics professor and trade expert at the Kiel Institute for World Economy says in resignation, “The WTO today is as dead as a door nail.”