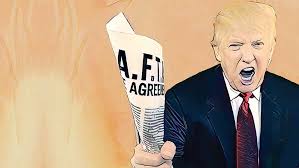 As expected, nothing came out of the seventh round of NAFTA negotiations. The treaty appears to be faltering, and with the way things are currently, this should not make anyone happy. Although, on the other hand, we already know that Donald Trump is shameless about his constant and intentional digressions, not just in his statements but also in negotiations about whatever issue is at stake. He has a calculated purpose here: using the Spanish expression “to make the partridge dizzy,” his purpose is to beat around the bush, to deceive others. In this case, the intent is primarily to mislead Mexican negotiators and their bosses, the rulers under which this country suffers.

However colloquial it may sound, the expression above has its origin in the world of hunting: first you make the partridges feel dizzy, and when they are sufficiently dazed and groggy, they become trapped. It would not be surprising to see the Mexican negotiators act like partridges who believe they are trapped by Trump’s greed.

But if NAFTA is being steered toward a cliff, it is bad news for Mexico in the short run. In the long run, as always, it all depends on what we do: whether or not we can put our house in order, so we can have more than just exporters here. PAN, the National Action Party in Mexico, which has become more like PRI, the Institutional Revolutionary Party in Mexico, has shown over and over again that it can’t put our house in order because it has lived by the neoliberal creed and the role assigned to it by the U.S. government under the Washington Consensus: laying a hand on the free operation of markets is prohibited.*

Trump is determined to shoot from the hip, letting his guns do the talking. He says he likes trade wars, says they are easy to win. He seems to be dug in, ready to start shooting and maybe, once and for all, blow up NAFTA, which he has described as the worst treaty the United States ever signed.

The administration of Carlos Salinas de Gortari and its successors signed that treaty so that exporters would have the comparative advantage of flattened wages in the free labor market in Mexico. The promise of the government was this: keeping starvation wages. That primarily guaranteed U.S. export firms based in Mexico their competitive edge in their own U.S. market, so much so that those companies have been the biggest winners under the treaty.

But according to the Salinas administration and its successors, the agreement would raise us to first-world status. In reality, it raised us, in accordance with the neoliberal plan, to the worst concentration of wealth, to the greatest socioeconomic inequality, in Mexican history. Now, neoliberal candidate José Antonio Meade is repeating the same fraudulent promise to us: that we will become a world power.

For his part, Trump spurns the treaty because it seems like cheating for Mexico to compete by paying starvation wages. Like the Mexican government, which is not going to follow a policy that establishes a tendency to equalize Mexican wages with those of the United States, Trump appealed to the rules of origin that are applied to components used in auto manufacturing. These rules state that 62.5 percent of the value of the components must originate in the United States. Trump wants it to be 80 to 85 percent. And at the time he put that proposal on the table, he announced levies on U.S. imports of steel and aluminum of 25 and 10 percent, respectively.

It is in this way, among others, that Trump wants to create jobs in the U.S. and, at the same time, reduce or eliminate Mexico’s trade surplus with the U.S.

But it turns out that Mexico loses that surplus and converts it into a deficit, owing to the fact that the components utilized by the U.S. exporters in Mexico are purchased in Asia, mainly in China.

Thus, Trump feels really smart, and trade wars turn out to be good, and easy to win because, with a rule of origin of 80 to 85 percent, Trump wants to reduce the deficit with Mexico (and with Canada) and, by the same stroke, undermine China’s international trade.

The preceding situation is an example of the way Trump subverts globalization. Other similar decisions are being made in relation to the European Union and the cancellation of the Trans-Pacific Partnership. In reality, this last development did not amount to much: withdrawing from the TPP was a photo-op on Trump’s part.

In this way, it turns out that a homo-quasi-sapiens like Trump can interfere with the free market, which neoliberals swear is the natural order. In 2011, professor Bernard E. Harcourt of the University of Chicago published “The Illusion of Free Markets: Punishment and the Myth of Natural Order.” In the book, he states the obvious: Free markets are always regulated, whether by governments or directly by the wealthy companies themselves.

Harcourt looks at the Chicago Board of Trade and the New York Stock Exchange. He analyzes the trades that take place there and finds that although these exchanges are widely seen as the epitome of the free market, in reality, they are private monopolies, self-regulated and protected by legislation. Their rules are established by the member firms and are overseen by internal committees, which determine the trading methods and times, as well as those who will be allowed to participate. Predictably, the rules favor those who make them. It comes as no surprise: When only a few are allowed to participate in making the rules, they will manage the markets in their own interest.

*Editor’s note: The Washington Consensus is a set of 10 economic policy prescriptions considered to constitute the “standard” reform package promoted for crisis-wracked developing countries by Washington, D.C. – based institutions such as the International Monetary Fund, World Bank, and the U.S. Treasury Department.