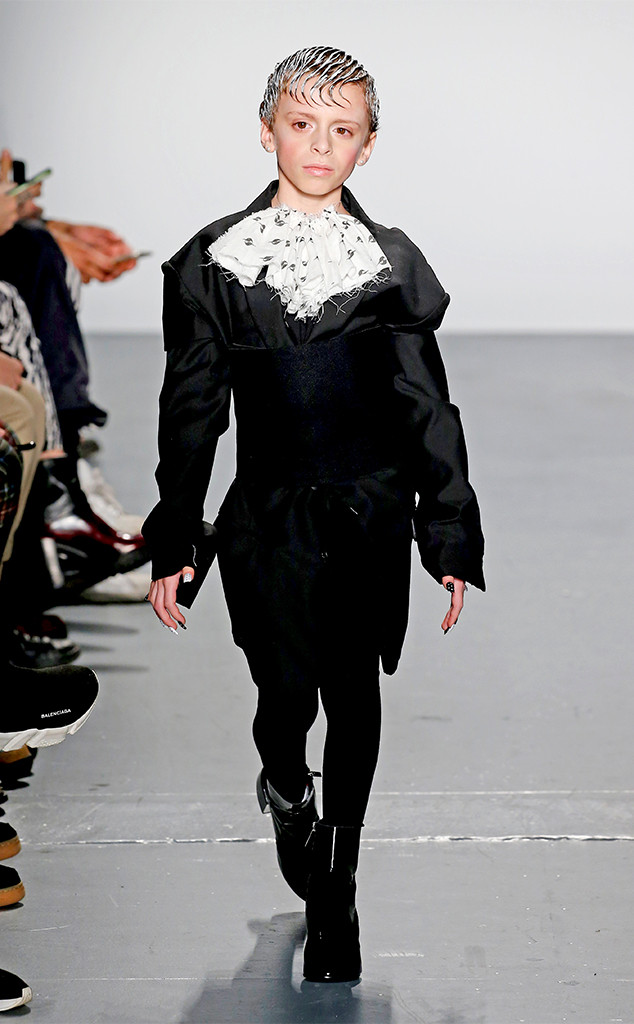 Activism, which in its folkloric cyclothymia has come to be an extension of a fashion show, is, in its intolerance, the continuation of a totalitarianism that has suffocated us since the 20th century.

They laugh. They photograph. Others write about the glamour of the “drag kid.” Yes, the model in the photo is 10 years old, and with what would be beyond the wisdom of these 10 years, presents himself as a drag kid and LGBT activist.

The image of this child-drag kid is as shocking as the child soldiers in Africa or the child brides in India. But beyond the shock, there is something more profoundly obscene in the photos of that fashion show at New York Fashion Week. And no, it is not that there is a model who is just a model who should be at home or in the street playing with others his own age. What is revolting, what disgusts, are the adults. Don’t people think? Don’t they have brothers, sons, nephews?…

The fashion show in which Desmond Napoles took part (that’s the name of the child in question), happened in the same country, the U.S., and at the same time as the latest trend of the moment, the #MeToo movement, which, in the name of combatting machismo, persecutes anyone who questions the fundamentals of gender theories.

One might think that at such a time when museums, films, books and discourses about the past are being scanned in search of signs of machismo and sexual exploitation, in a grotesque operation of revisionism and rewriting of history, there would be a minimum of attention paid to other and very contemporary manifestations of these evils, even more so where a child is concerned.

But no, the clamor of the crusade against abuses real (and imagined) perpetrated on women by heterosexual men, preferably white, coexists with silence about the violence in other ethnic groups and with the applause for the underlying violence in the spectacle of the drag kid or the existence of abdomens for rent.* Yes, because it was not just the producer Harvey Weinstein who used the power and money he had to abuse and cause distress in women. What do women such as Sarah Jessica Parker or Sofia Vergara do when ordering children from other women, if not abuse their power in relation to them?

Moreover, I don’t see how one finds it natural to behave very Soviet-like in the substituting of images of one actor accused of harassment, Kevin Spacey, for another, Christopher Plummer, who, as far as I know has not been accused of anything. (But I admit, until I finish writing this article he could enter into the roster). And at the same time a story line, which seems to be taken from a science fiction film in which Sofia Vergara was scripted to choose to resort to renting an abdomen, stays in the gossip columns. Or could it be that abuse, when it is committed by women who for the most part star in series, is considered to be “advanced,” and counts for less?

In reality, the selectivity of the indignation is inseparable from the totalitarianism of modern times and what we call activist-progressivism. And it is a bit like this everywhere, and these apparent contradictions would already fill a hypothetical collector’s album: They are always available to criticize the actions of the police, but in truth are not confronted with assault because they don’t frequent suburban trains, but live in rich areas (when not in closed condominiums). (I know some of these apparent contradictions in Portugal.) They are the ones who are militant about public education, who put their children in private schools, preferably foreign, so as not to face the possibility of living among the children of the poor.

It is defenders of multiculturalism who tell us we don’t just need to tolerate everything, but also that those whom we all must tolerate have the right to impose their values, even if among these values include forced marriage, sexual and racial discrimination.

It is those, who are outraged by guns, who are outraged only if the weapons in question have bullets and are used in the U.S. (preferably during a Republican administration). Yet, if there is a knife attack in London or in France, not only is there no indignation when referring to the matter, even the identity of the victim and the aggressors are omitted. It gives the right to those who do it to be in the role one would expect to be reserved for the aggressors, but progressive-activists never respond with contrasting facts or ideas but rather by reflexive accusation: Whoever questions the effectiveness or scope of quotas for women and ethnic minorities becomes immediately “macho” or “racist.” Whoever says that children, independent of whether they were created by two men or two women, will always have a mother and a father, soon becomes “homophobic.”

Activism, which in its folkloric cyclothymia has become a variant of a front row seat at a fashion show, is, in its intolerance, the continuation of those who, in the name of communism or fascism, have prevented or impeded disagreement and continue to fight for control of opinion. Or more precisely, continue to fight for that which always interests them, i.e., power, the power to control others, either with militias, outraged groups, or the police. All this we have already seen or will see again if we give them the chance. Now they are in the phase of establishing commissions, people who install themselves in government and who, we discover, are going about from one day to another searching for what everyone thinks and says. Asking for punishments and fines. Causing ordinary mortals to fear that they might become the next victim of this howling mob and of the bureaucrats who support it. These activists impose the need to silence a normal reaction and to wait for that reaction to pass, or rather, to wait for the activists to change the subject. Because they never change their way of acting. Only the power that is given to them changes and the target they choose.

For all of this, I don’t doubt that some day people will look at the photos of this New York Fashion Week and scream “horror.” Soon they will find a scapegoat. They will accuse right and left. Pass another law, form another commission, make one more regulation … and by the time they’re through, children won’t be able to wear masks in the Carnival Parade. And they, who now feel the drag kid represents an advance, will parade at the Emmys in future years, perhaps with their children simply dressed as children, and woe to those who don’t bring the progeny properly adorned to the red carpet. Here I am of the belief that they will bet on becoming officials of a brand new commission, like so many others destined to regulate in the name of the fight. I do not know what fines they will assign to those who disagree with them.