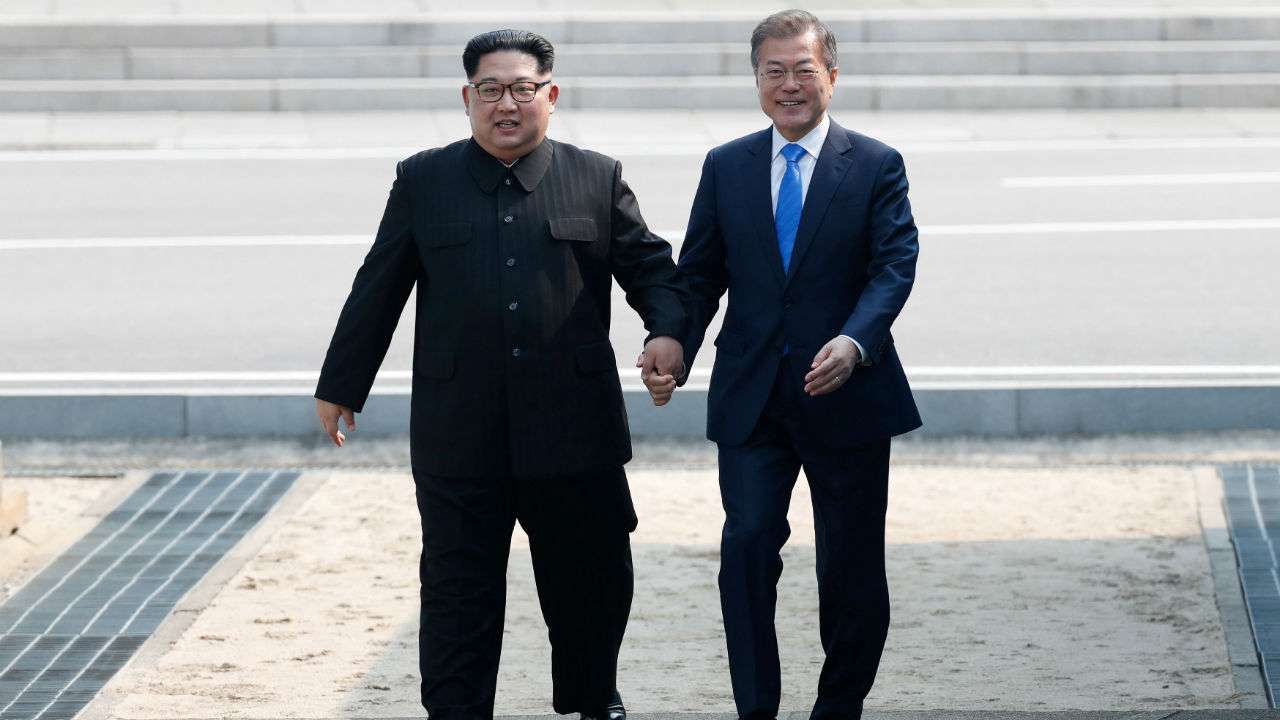 Friday’s summit between Kim Jong Un and Moon Jae-in produced, in both words and gestures, a quite extraordinary rapprochement. Time will tell what sort of peace it will, or won’t, bring. In any case, for now, it imposes an obligation on the United States to negotiate.

It began with a symbolically loaded gesture, a kind of two-step executed Friday morning over the military demarcation line that has divided the Korean Peninsula since the conclusion of the armistice in 1953. The sight was almost disarming: Exiting from the south-facing pavilion, Kim Jong Un went to meet Moon Jae-in, who was waiting for him on his side of the MDL. The two men then went north of the line hand in hand, before returning to the South and to the “peace house” specially arranged for the occasion of their discussions.

Symbol upon symbol: Kim Jong Un thus became the first North Korean leader to touch South Korean soil since the war. Peace at last? We are almost tempted to believe it.

Diplomatically, it was a master stroke for both men. After his bromance with [French] President Emmanuel Macron, we can imagine Donald Trump ridiculously outbid, but not to be outdone, at the summit that he must in theory hold with Kim in May or June.

In words, the day was no less staggering. Kim and Moon are committed to a “complete denuclearization” of the Korean Peninsula. They expressed their willingness to transform the demilitarized zone that divides the two countries into a “peace zone,” “to meet regularly, and to finally replace the armistice with a peace treaty in good and due form.” They also agreed to hold, in August, a new reunion of families separated since the end of the war 65 years ago.

All these initiatives make it seem like Kim doesn’t want to repeat the “unfortunate history of past inter-Korean agreements that only reached the starting line.” He wondered why this had not happened before. It’s true that there is something like a generation gap in the overtures of this young, 34-year-old man. Some want to see a son who is coming out from under his father’s shadow. Except that, more prosaically, the key fact is that Kim has decided that he must quickly launch his country on the path of modernized economic development.

Hence the absolute necessity of pulling his country out of its diplomatic isolation and eventually obtaining the lifting of international sanctions that have strangled it for at least 10 years. Its Chinese ally remains interested in encouraging the country in this respect, all the while being wary of the nuisance effect that could result in an eventual reconfiguration of regional dynamics in its sphere of influence.

The day was all the more surprising for crystallizing the establishment of dialogue after a 2017 that was dangerously troubled by military escalation (North Korea launched at least three intercontinental missiles and conducted its sixth and most powerful nuclear test), intensified by a bewildering verbal clash with Trump.

“Complete denuclearization”? It’s not coming any time soon. Denuclearization is an elastic notion, and it doesn’t have the same meaning in Pyongyang as in Washington. Trump could well say that the intensification of sanctions has made Kim Jong Un come to the table, which is partially true. But the fact remains that the denuclearization of the peninsula that the North Korean dictator speaks of certainly does not mean that he has agreed to give up his nuclear deterrent force. At most, he has agreed to freeze the development of his arsenal. To go any further, there must be reciprocity from the United States, and that is hardly imaginable.

A man who plays his cards very well, Kim is probably more convinced than ever of the importance of having a bomb when dealing with Washington, considering the threat of “tearing up” the Iranian nuclear deal that Trump keeps throwing around.

Clearly, the White House is wrong to stick to its demand for the “complete, verifiable, irreversible denuclearization” of North Korea. The success of the inter-Korean summit itself is another invitation to dump that position. Will the White House get it? The chances of seeing a peace process taking hold in the peninsula will be measured by whether or not Trump will negotiate when he meets with Kim.