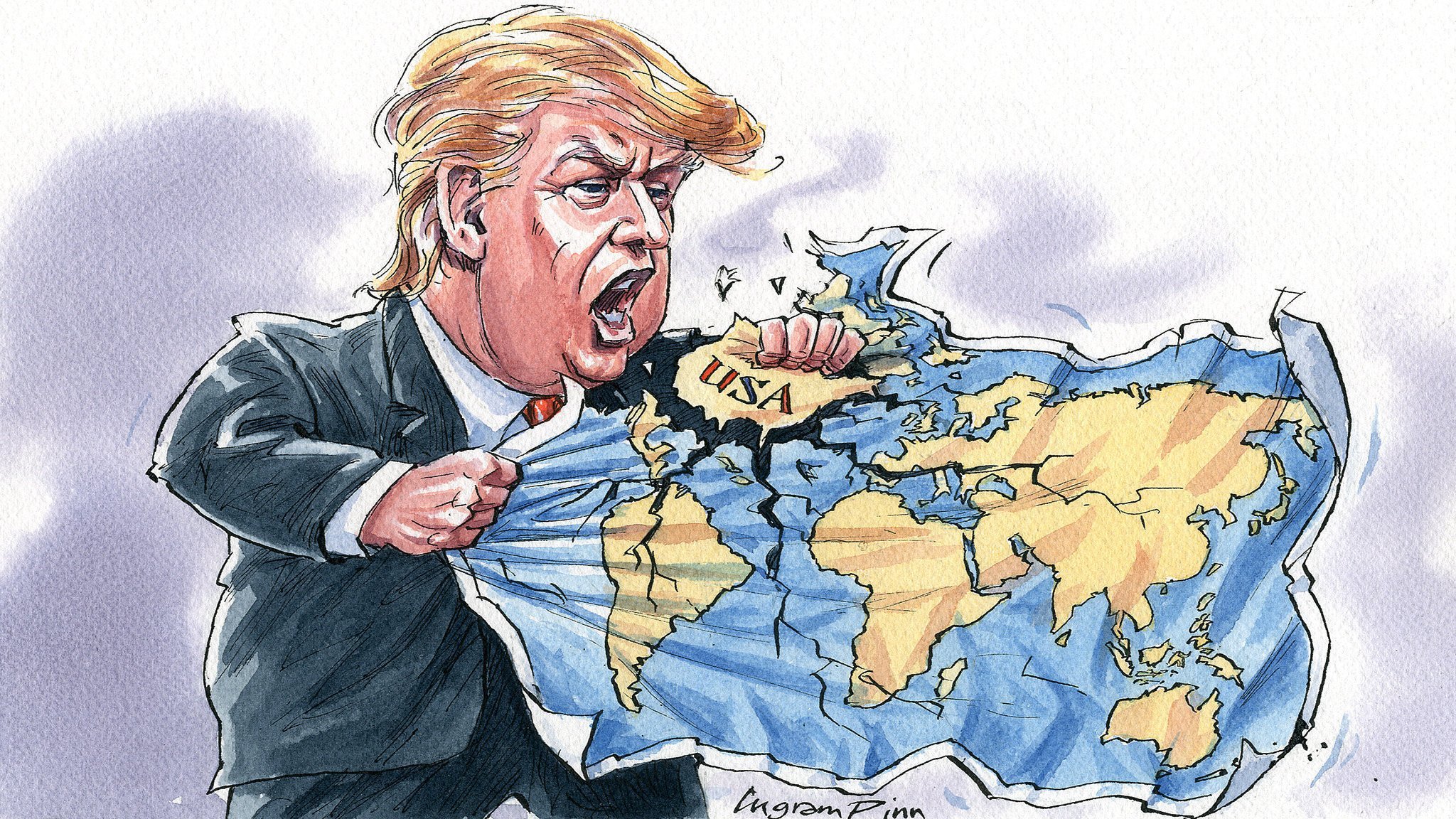 The world is watching a geostrategic earthquake from which will emerge an America more alone than ever.

The Donald Trump presidency has entered a critical point. After breaking the Iran nuclear treaty this week, on Monday, he gave the green light for opening the embassy in Jerusalem. Afterward, he is to decide the fate of the North Atlantic Free Trade Agreement with Canada and Mexico, then the fate of the tariff war with Europe, and on June 12, the nuclear future of North Korea. In just a month, the world will watch a geostrategic earthquake from which will emerge the new order dreamed of by Trump. One in which America is more alone than ever before.

Europe currently finds itself very far from the United States. While German Chancellor Angela Merkel judges that now she can no longer trust in the United States, Trump passes pleasant hours at home. Unemployment is at its lowest level since 2000. Internal scandals are dampened by external winds and his ratings are trending up. “His support returned to levels he had the day of his election. If the elections of 2016 were held today, we would have a similar result: Hillary Clinton would gain the popular vote, but Trump would triumph in the Electoral College,” said analyst Larry Sabato, director of the Center for Politics at the University of Virginia.*

This recovery of the president’s poll numbers, as with everything about him, paints a paradoxical picture. There is one predictable part, rooted in his fiscal reforms and the booming economy, and another, unexpected, which corresponds to his international agenda. The television “showman” who does not have diplomatic experience, the isolationist who has never had to deal with heads of state, is, at this moment, fighting his great political battle beyond the borders.

The decision to bomb Syria, break up the nuclear treaty with Iran, distance himself from his Atlantic allies, transfer the American embassy from Tel Aviv to Jerusalem and meet face to face with the leader of North Korea, gives him, among other things, that which he has never had: an air of statesmanship. Not that it has diminished Democratic criticism of him. On the contrary, the anti-Trumpist furor does not stop growing, and Barack Obama himself broke his silence. But, in the permanent agitation in which Trump transformed his presidency, polarization gives him the electoral fuel he needs. His “base,” similar to what happened when he was a candidate, identifies itself now with a powerful and effective president. A man capable of changing not only Washington, but also the world.

“We have arrived at a crucial moment in the foreign policy of the U.S. It is a month when everything comes together and the risks are many. The conversations with North Korea, the sanctions again Iran and the opening of the embassy could detonate great crises,” noted Jonathan Schanzer, an analyst with the Foundation for Defense of Democracies.*

Trump did not make this trip alone. He adopted the Israeli agenda in the Middle East, imposed an isolationist creed in the White House and radicalized himself. A man of abrasive instincts, during the first 12 months of his term, the moderate wing restrained his desire for rupture. The strategist Gary Cohn, national security counselor to H.R. McMaster, and Secretary of State Rex Tillerson acted as counterweights. They were the last line of resistance facing the presidential explosions.

This is the year of midterm legislative elections, crucial to maintaining control of the Congress and avoiding eventual impeachment. Trump has protested against the moderate wing vehemently. In its place, he has chosen a team of falcons led by new Secretary of State Mike Pompeo. Free from his moorings and encouraged by his supporters, he initiated a grand external offensive. The rule is clear: Impose outside, gain points inside.

“Obama understood that the United States, for its power, had a global responsibility. For Trump these responsibilities don’t exist, just rights. While other nations must meet their demands, the U.S. has no commitments to anyone,” writes analyst Peter Beinart.**

Under this exceptionalism, Trump now heads toward his greatest challenge: the face-to-face meeting with the supreme leader of North Korea, Kim Jong Un. On June 12, the Republican president will meet with Kim in Singapore.*** The objective will extend much beyond nuclear dismantling. The goal is to reaffirm, upon the ruins of multilateralism, the American world hegemony.

On this premise, Trump prepares his game. Counting on the support of China, he will lead an army, infinitely superior to that of North Korea, and after a year of threats and testosterone-fueled arguments, the two contenders have arrived at seemingly calm waters. Kim released the last three American hostages in his possession. And Trump even humanized him, who, just a short time ago, he called short and fat. “Kim is honorable and wants to bring Korea into the real world,” Trump said.*

These measures are being taken before the meeting, a meeting on a razor’s edge, of which few dare to predict the result, although it has been presented in terms of all or nothing. If he triumphs, Trump will have succeeded in doing something that no one expected of him. “The world would be a safer place,” Schanzer said.* However, if it fails, then there would be no more diplomatic cartridges to spend. What would remain at the forefront would be just the use of force and threats of a nuclear conflict. It would be the debut of Trump’s new world order.

Iran and North Korea: The Strategy of All or Nothing

Trump kicked at the Middle East playing board with an eye on North Korea. On Tuesday, the president of the United States claimed that he had decided to abandon the treaty signed in 2015 with Iran because it had neither served to reduce “the malign behavior” of Tehran in the region nor frozen its ballistic missile program and its capacity to resume following the nuclear path. Using this argument, although Iran had scrupulously complied with the Vienna stipulations, Washington re-established sanctions, including against its principal European allies, and shot instability into a land soaked with blood. “At the heart of the Iran deal was a giant fiction: that a murderous regime only desired a peaceful nuclear energy program … In just a short period of time, the world’s leading state sponsor of terror will be on the cusp of acquiring the world’s most dangerous weapons,” Trump justified.

The reaction against this was extensive. In the United States, it was led by Obama. “The consistent flouting of agreements that our country is a party to risks eroding America’s credibility, and puts us at odds with the world’s major powers,” the ex-president warned.

The White House thinks differently. Far from embracing the argument that the U.S. loses credibility by breaking the accord which they sponsored and signed, the president’s falcons consider that not only was the treaty weak, but also that unilaterally pulling out of it strengthens Washington in its negotiation with Pyongyang. For them, this attitude makes it clear that the U.S. will only accept a complete treaty in Singapore. This is the doctrine of all or nothing. Negotiating with a pistol in hand. Or as Trump said, “They have to know that now the USA does not make empty threats.”*

**Translator’s note: Although accurately translated, the exact wording of Peter Beinart’s quote could not be independently verified, however, the sentiment contained in the remark mirrors his views as expressed in his article in the May 2018 issue of The Atlantic.

***Editor’s note: On May 24, 2018, President Trump cancelled his meeting with Kim Jong Un, accusing Kim of “tremendous anger and open hostility.” On May 25, 2018, the president indicated the meeting may be rescheduled.