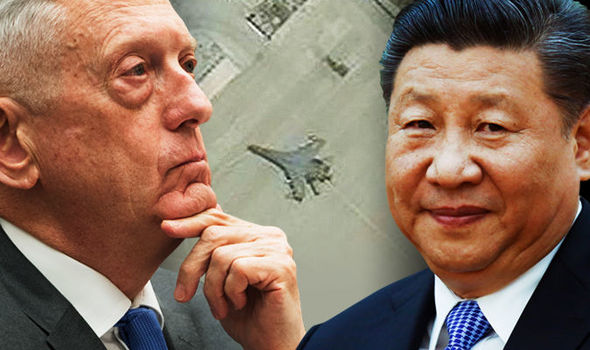 U.S. Defense Secretary James Mattis is visiting China from June 26 to June 28. This is his first visit to China and his eighth visit to Asia since he took office 17 months ago. This time, in addition to visiting China, he will also visit South Korea and Japan.

Mattis is coming to China in the wake of Washington calling the U.S. and China “strategic rivals,” as well as a whole host of escalating disputes between the two countries. Aside from the ongoing U.S.-China trade war, America has expanded its official association with Taiwan and has pressured China on the South China Sea issue by rescinding its invitation for the People’s Republic of China’s army to participate in the 2018 RIMPAC military exercises.* Mattis has denounced China’s attempts to “reinstate the tribute system” while copying China’s authoritarian model on the international stage.**

This visit to China indicates that Mattis and the Trump administration still want to maintain a military dialogue with China. When it comes to alleviating tensions between two countries, it’s always beneficial to have dialogue, and it’s much better than speculating about the “strategic schemes” of the other side based on nothing more than satellite reconnaissance pictures of a faraway place.

However, since this is a dialogue, we must listen attentively and conscientiously to one another. America is a powerful speaker and is excellent at self-expression – it is not only able to amplify its own voice, but also to influence how the international community will interpret it. China’s skill in this area is not nearly as great. Accordingly, whenever the U.S. and China engage in dialogue, America must be especially conscientious in striving to understand China; it should maintain an empathetic approach, and it should not take the rigid attitude that a U.S.-China dialogue is an opportunity to lecture and threaten China.

I hope that America will be able to properly recognize the basic nature of China’s national defense, and to understand the corresponding relationship between China’s national strategy and the comprehensive development of China’s economy and society. China really isn’t set up for expansion. China’s power is suited simply for outward growth, growth that can be classified as the normal external flow of a large rising power’s influence. America shouldn’t interpret this as some sort of unbridled evil being unleashed against it.

China has no intention of challenging America’s global influence; from the top echelons to the masses, Chinese society simply doesn’t have that kind of ambition. On the contrary, the Chinese people have always been intensely worried about America containing China. China must have the ability to maintain national security and continuously expand its interests, it must defend its ability to develop, it must prevent other powers from using violence against us under any circumstances, and it must maintain enough military force to dispel any such temptations. That is what the Chinese people really think.

When it comes to our nuclear strategy (which is the cornerstone of our national security policy), China has always maintained its commitment to the no first use nuclear weapons policy.*** This is an area in which we are most sincere about not challenging the current world order. At the same time, we are really worried that one day America will launch a campaign of strategic blackmail against China, and so China must expand its nuclear arsenal to ensure that our second-strike nuclear capability is even more unbreakable. It must be said that China’s nuclear strategy perfectly reflects our strategy of maintaining a low profile.

The South China Sea is the doorway to China, but at the same time, it is also an international waterway, and is subject to territorial disputes. America has once again become very active regarding this area, creating a significant challenge for China. China’s decision to begin construction on the Spratly Islands was the result of careful consideration, aimed at defending China’s sovereignty and maintaining peace in the region.**** As a result, China has not recaptured the Spratly Islands which were illegally invaded by other countries, nor has China deployed offensive military equipment to the island reef we constructed. So far, China has been extremely reserved in its response to provocation.

The U.S. doesn’t accept China’s construction of island reefs. This is its strategy of discrimination against China as a great power. America has hundreds of military bases around the world, but any improvement of China’s military capability is met with thoughtless criticism, apparently hoping that China’s economic development won’t give rise to any transformation in the military sphere. Not only is this hegemonic thinking, it would also require China to accept an arrangement that would create an extremely insecure position for us. This is not a constructive approach to handling relations between large powers.

China’s influence in the South China Sea should not be any less important than America’s. This is the same reasoning as the idea that no matter how powerful China becomes, America should still have greater influence in the Caribbean than China. If America is unable to put itself in China’s shoes and empathize with China’s feeling of insecurity, if America fails to treat China correctly by undoing the measures that are contributing to that feeling of insecurity, then it will be very difficult to prevent tensions between the U.S. and China.

We hope that Mattis can use the opportunity of this visit to China to work with his Chinese counterpart to make some real progress toward finding a greatest common denominator between the two sides.

**Editor’s note: This quote, accurately translated from the original, could not be verified. In a June 15, 2018 speech, Mattis likened the current Chinese government to the Ming Dynasty in its demands that other nations become “tribute states kowtowing to Beijing.”

***Editor’s note: “No first use” or NFU refers to a pledge or a policy by a nuclear power not to use nuclear weapons as a means of warfare unless first attacked by an adversary using nuclear weapons. China declared its NFU policy in 1964, and has since maintained this policy.

****Translator’s note: The Spratly Islands are also referred to as the Nansha Island Reef in the original Chinese.