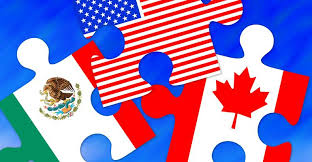 The staging and script for the announcement of a successful trade agreement with Mexico looked convincing. Everybody seemed to be happy in the photo on Page 1 of the Sept. 3. edition of The New York Times, where President Donald Trump announced the “largest trade deal ever made.” This was the new trade agreement with Mexico that, according to him, should take the place of the North American Free Trade Agreement.

The propaganda from the White House and the Office of the United States Trade Representative started to circulate right away. America has turned the page on a trade agreement that sacrificed our prosperity, and drove off our companies, our jobs and our country’s well-being. It is the first phrase in the document from the White House titled, “President Donald J. Trump is Keeping His Promise to Renegotiate NAFTA.”

For its part, the Office of the Trade Representative issued information sheets, in one of which it stated that the new agreement transforms the supply chains so they have more content produced in the United States, especially content that is key for auto manufacturing in the future that creates higher paying jobs.

Beyond the concerns raised by the statements above, what is certain is that despite the festive mood with which the announcement of the agreement was greeted, there is a series of open questions that must be answered to make this a reality. This is a preliminary draft, Canada’s participation is uncertain, and consequently, there is uncertainly as to whether the Mexican and U.S. governments will ratify it.

The issue of Canada is raising serious concern. At the time this article was written, there was little information about whether Canada is going to join – at the latest by next Friday, Sept. 7 – in what Mexico and the United States have agreed upon. In the new agreement, it is reported that there is a substantive difference in the chapter regarding dispute resolution, and that Mexico has capitulated with respect to its elimination. Beyond that, there is reason to believe there would be differences regarding the percentage of various manufactured products that must be produced in the United States. For this and for other reasons of a political nature, one can predict that Canada will not comply with the rushed political timetable of the Trump and Peña Nieto administrations.

In the absence of full integration of Canada on a common text, what would be presented to Congress would not be the renegotiation or modernization of NAFTA, for which Trump has authority. Ratification would be sought for a bilateral trade agreement with Mexico, which he has not negotiated with the U.S. Congress.

In parallel with the uncertainties discussed above, Mexican political analysts and specialists in trade issues have been skeptical about the benefits of what was so blithely announced as a great victory. The main bone of contention is the new rules for the automotive industry, not so much for their immediate effects, which would perhaps not be too serious, but rather for their long-term significance. The general impression is that in reality, the new rules would only affect a small percentage of what is exported to the United States. In the long term, however, they will wipe out a trend of sustained growth in the industry, for which great technological changes are foreseen.

Mexico accepts that complex tasks carried out by specialist workers, earning more than $16 per hour, will continue to be done in the United States, or in Canada, as the case may be. Mexico’s competitive advantage is, and will continue to be, cheap labor for jobs that require less training, as in the assembly phases.

However, in making the move to electric vehicles – which may happen more quickly than anticipated – the overall profile of the auto industry labor force will change, and the comparative advantage of low wages will have a different significance. It is possible that Mexico might be able to raise the educational level of its workers and thereby keep Mexican participation desirable for investors. However, this is more uncertain, it takes time and it makes that participation less attractive than it is now.

Another issue of concern is the new labor rules. These are stricter and provide for actual enforcement of the rules on wages, benefits and organizing by workers, rules that are often ignored in Mexico. It’s good that there is pressure in favor of compliance, but this may unfortunately also discourage investment.

In the meantime, it would be misleading to claim that there is nothing to celebrate. Given that the alternative is the sudden elimination of NAFTA, maintaining the existing situation is a major achievement. Looking into the future, there is an urgent need to rethink the convenience of continuing to export manufactured goods to the United States, in particular autos and auto parts, as the most attractive option for the Mexican economy.

Until now, all of the opinions have been based on information from the United States, including both leaks and common wisdom. Unlike in the U.S., where public information has been made available quickly, the Mexican government did not have documents prepared to make the public aware of what had been agreed upon. There is an urgent need for this information, made accessible through organized and helpful commentary, to be presented to the newly-seated Congress. Legislators and the general public need the information to evaluate what we might gain, and what we might lose, with this new version of our most important trade agreement.

Also needed is a proper assessment and justification of the cost that this whole issue has for the relationship with Canada, one of Mexico’s most important allies in North America and in the the world, generally. The Monday, Aug. 27 announcement is much more than a time for celebration; it is the starting point for a profound reflection on the future.

About Tom Walker 204 Articles
Before I started working as a translator, I had had a long career as a geologist and hydrologist, during the course of which I had the opportunity to work on projects in Mexico, Chile, and Peru. To facilitate my career transition, I completed the Certificate in Spanish-English Translation from the University of California at San Diego. Most of my translation work is in the areas of civil engineering & geology, and medicine & medical insurance. However, I also try to be aware of what’s going on in the world around me, so my translations of current affairs pieces for WA fit right in. I also play piano in a 17-piece jazz big band.