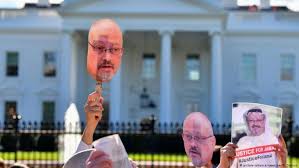 The murder of Jamal Khashoggi will be used by the opposition Democrats: they will aim at Mohammad bin Salman and his government, but will do so to hit Trump.

No one knows on whose instructions he was murdered. By all indications, Saudi Crown Prince Mohammad bin Salman ordered the death and dismemberment of the journalist Jamal Khashoggi. But his blood has splattered Donald Trump and is threatening to destabilize his chaotic administration.

What the crown prince could not appreciate was that the opposition Democrats, now the majority in the House of Representatives, would use him as what the old artillerymen would call a “proxy target.” They were aiming at him and his government, but in order to hit Trump. That is the goal.

Since Khashoggi, a Saudi exile, was a resident of the United States, Salman took the courtesy of eviscerating him in Turkey, where his disappearance presumably would not be investigated too carefully. After all, Turkish President Recep Tayyip Erdogan, a fellow Sunni, is not unfamiliar with the iron fist, and understands the difficulties of exercising power in that bloody region of the planet. He who rules always has to keep the scimitar sharp. Or the power saw, taking advantage of 21st century conveniences.

Why did Salman send a small posse of assassins, including a forensic pathologist and a private jet, to Istanbul to execute Khashoggi if he knew that Khashoggi was not a dangerous person? On the contrary, he was dealing with a moderate, who was providing balanced coverage of Saudi Arabia.

My guess, based on information published by “CNN en español,” is that Salman wanted his secret services to know that they had better not play with him because he will not hesitate to eliminate them. It was a message for his crew.

Khashoggi had recently sent his friend, Omar Abdulaziz, more than 400 WhatsApp messages in which he harshly criticized Salman. They both believed that communication by WhatsApp was safe from Saudi intelligence, but that was not true. Some time ago, the Israelis discovered how to hack these codes, and presumably almost all of the spy services now know how to penetrate this popular (and free) system of communication.

Khashoggi took Salman to be a petulant and implacable young man who imprisoned anyone he wanted. CNN quotes Khashoggi as saying, “Arrests are unjustified and do not serve him (logic says), but tyranny has no logic, but he loves force, oppression and needs to show them off. He is like a beast “Pac Man,” the more victims he eats, the more he wants. I will not be surprised if the oppression will reach even those who are cheering him, then others and others and so on. God knows.”

When the press questioned Trump about the reasons for his whitewash of Salman’s involvement, the U.S. president told a lie (“Maybe he did or maybe he didn’t”), but immediately afterward, answered like a salesman, providing an economic reason for that indefensible farce: Saudi Arabia has been a great ally. Saudi Arabia sells the United States 9 percent of the oil that the country imports, and buys 98 percent of the arms and missiles that it uses from the U.S.

We are talking about billions of dollars, not including war spending for the United Arab Emirates, Egypt and Turkey, also clients of Washington.

In this and similar episodes involving Democrats as much as Republicans, we can see the huge contradiction between speeches about freedom and the actual conduct of various governments. And the excuse (also true) is that if the United States did not sell weapons, other antagonistic powers would benefit. Those weapons markets would be left to Russia or China, France, England or Germany, also among the major arms dealers.

In any case, it is a big mistake for the president (whether it be Trump or Obama), or the Spanish or English governments to protect special interests (the arms industry, hotel chains or whoever it might be) as if all the inhabitants of their countries think that the economic success of these sectors is the best thing for them. This is not true. When I was young, I believed that “what’s good for General Motors is good for the United States.”

That is not the case. What is good for society is determined by the free market and not the mercantilist deals of those who hold power. This is where so many unworthy businesses, like Odebrecht and the similar conglomerates of this world, get started.

Contrary to the myth, countries do not have discernible economic interests. What is good for exporters is bad for importers, and vice versa. It is companies that have interests. Presidents and kings are only the repositories of broader social values. If Trump had embraced this principle, Khashoggi’s blood would not have stained the White House and Trump would not be in the trouble he is in.

About Tom Walker 221 Articles
Before I started working as a translator, I had had a long career as a geologist and hydrologist, during the course of which I had the opportunity to work on projects in Mexico, Chile, and Peru. To facilitate my career transition, I completed the Certificate in Spanish-English Translation from the University of California at San Diego. Most of my translation work is in the areas of civil engineering & geology, and medicine & medical insurance. However, I also try to be aware of what’s going on in the world around me, so my translations of current affairs pieces for WA fit right in. I also play piano in a 17-piece jazz big band.