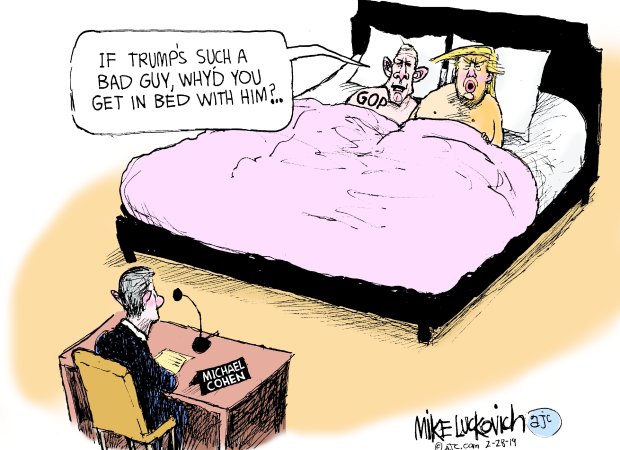 On Feb. 27, lawyer Michael Cohen, the man who for 10 years did the dirty work of protecting Donald Trump, appeared before the U.S. House Committee on Oversight and Reform.

If the protagonists’ names were omitted, you might imagine you were watching an informer testify against the head of a criminal organization — a mob boss. Of course, in such organizations, the law of silence must prevail; therefore, Cohen’s testimony was extraordinary.

And this was surprising: Not one Republican representative objected to the accusations, as though they were actually common knowledge and true. Instead, the Republicans acted as though the lawyer was not even qualified to be a traitor.

Some of the pearls tossed by Cohen:

For starters, Cohen’s definition of Trump: a liar, racist and a cheat;

Trump, according to Cohen, knew about the plot with WikiLeaks to divulge Democratic National Committee emails, aimed at discrediting candidate Hillary Clinton;

He presented the financial statements (2011-2013) remitted by the Trump Organization to Deutsche Bank, figures that were conveniently inflated or reduced, depending on whether the object was to obtain a loan or reduce taxes;

He said that, contrary to the official story that Trump had suspended his business dealings with Russia during the campaign, Trump was aware at all times that those dealings continued during 2016. Given the possibility of Trump campaign collusion with Russia to influence election results in November 2016, business dealings with Russia have been one of the lines of investigation by Special Counsel Robert Mueller, who will soon present his findings to the Department of Justice;

Cohen recalled that on many occasions over the years, he lied for Trump, including to Congress. In business dealings, intimidation of the other party was a mandatory part of the menu. (One recalls the mafia boss in “The Godfather”: “I’m gonna make him an offer he can’t refuse.”) The reason Cohen gave for this conduct was that he was ambitious.

Trump, who left Hanoi on the day of the Cohen testimony without a desired announcement to dismantle North Korea’s nuclear infrastructure, is in urgent need of political oxygen, which he could seek in the form of military intervention in Venezuela.

Colombia cannot join in an adventure that will not resolve the crisis in Venezuela, and that would have grave consequences for many long years for our country. Nicolas Maduro’s necessary departure must be peaceful, and not serve the interests of the kind of individual Cohen has described.