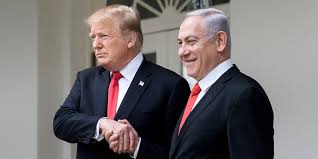 Another one of Donald Trump’s unorthodox feats took place at the end of March, albeit quietly, given our domestic political squabbles. The American president, using his position as the most powerful man on earth, recognized Israel’s right to the occupied Golan Heights.

It happened against the will of all allies, including the European Union, although a reasonable portion of the world quietly acknowledges that the Jewish state has confirmed the axiom “that a rough coat requires an equally rough patch.” I didn’t originally plan to address this issue, but I sat down to write this article after seeing Trump signs among supporters of Prime Minister Netanyahu celebrating his election victory.

There is absolutely not doubt that in making his decision, the American president demonstrated how one can influence elections in a democratic country. Although he might have waited until after the election to take this step, which was quite correctly described as shock therapy, Trump in his own way he “bestowed” the Golan Heights upon his loyal ally Benjamin Netanyahu. Hardly anyone doubts that this decision handed at least two percentage points (in this case thoroughly decisive) to a prime minister who, by all accounts, faces impending corruption charges. At the same time, this step by Donald Trump, wily strategist that he is, has opened not only the lock but the gate itself for all Israeli prime ministers. Not counting the roughly 20% Arab population, there are very few in the Jewish state who would rightly have no appreciation for such advocacy by the president of the world’s only superpower.

When it comes to such an experienced and worldly-wise politician and businessman all rolled into one, as Trump undoubtedly is, there’s no point in kidding oneself that his firmly pro-Israel stance is dictated merely by a love for Israel or for his son-in-law, Jared Kushner. The presidential election campaign is gradually approaching, and it’s clear to the incumbent that if there’s one thing he’s truly lacking, it’s the Jewish vote. To illustrate, in contests between Democratic and Republican presidential candidates over the last 100 years, the Jewish vote has been split 70% to 30%. Even the widely respected Ronald Reagan had to be satisfied with 39% of the Jewish vote. Democrat Barack Obama, by contrast, easily mustered 78% of the Jewish vote in 2008, and even though he virtually conducted a cold war policy against Israel during his first term, it only cost him a paltry nine percentage points. Still, basically not one Republican candidate has thus far held such a strong trump card as Trump himself, who has “quarreled” with the whole world, as it were, over the Golan Heights. So, the American president is not likely to achieve a total turnabout in the historical wheel of fortune, but a ratio of 40% to 60% would amount to a tremendous victory.

Russia’s stance on the Golan Heights, then, turns out to be very intriguing. That is, the Kremlin maintains exceptionally good relations with Israel. Netanyahu held negotiations with Vladimir Putin eight times last year alone. Moscow could accept the aforementioned annexation, sanctified by the U.S., and at the same time pose the logical question: If the Golan Heights, then why not Crimea? It would occur at a time when the bubble called “Russiagate” has burst thanks to Special Counsel Robert Mueller’s report. Instead, Russian diplomacy has decided to support its Syrian vassal, over whom it has to share power with the inscrutable regime of ayatollahs from Persia. But then, as is well known, diplomacy presents the longest path between points A and B, a path full of twists and turns.