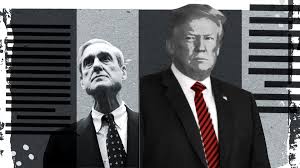 U.S. Special Counsel Robert Mueller’s report is currently being subjected to thorough scrutiny by legal scribes. What is in it exactly and what does it mean? The report is complicated by redactions within the 400 pages of text. What do the redactions cover, was the text redacted because there is an ongoing investigation into the matter concerned, and what does that mean?

The highlight of the report occurs when Trump is told that Mueller has been appointed special counsel. I can very well imagine that Mueller has included that in the report as featured material. It says something about Trump’s evil conscience, it is incredibly funny and it is a compliment to the skill of the report’s author. Trump says after hearing the bad news: “Oh my God. This is terrible. This is the end of my presidency. I’m fucked.”

You can hear President Frank Underwood from “House of Cards” saying it. You see Trump sitting down, his head turned red, in a panic. He is doomed. Rod Rosenstein has appointed that wretch of a Mueller and he is going to castigate him. It is one of those scenes that is very tragic (someone sees his life shatter into pieces), but at the same time hilarious because of the precise way in which the victim summarizes his impending demise.

The buildup is as masterful as if Mueller had hired a screenwriter. The beginning is strong: “Oh. My. God,” (desperate pause). Then the statement builds up beautifully to the climax in two sentences: “I’m fucked.” When “Russian Interference” is made into a movie, at least they will not have to work any further on this scene.

At the same time, the remarks are revealing. Not surprisingly, they are the most quoted ones from the report. From a legal point of view, it is not a confession, but the statement makes clear that Trump had, in his own view, everything to fear two years ago.

Formally, Mueller concludes that the Trump campaign has not intentionally colluded with the Russians; that Trump was not a puppet in Putin’s hands.

But even that conclusion is not rock solid. It only lacks evidence that Trump was aware of contacts between people close to him and Moscow. Yet there are so many examples in the report of the close ties between camp Trump and the Russians, it is impossible to leave it at that.

There are 181 pages in the report on attempts by the president to interfere with the investigation; that is, despite the redacted passages, that he has tried is clear. In a number of cases, such attempts are blocked by his staff who did not do what Trump asked. Mueller did not want to get burned dealing with this, and according to him, it is now up to Congress to continue the investigation.

The whole report reeks of lies, intimidation and manipulation. Trump traveled to his golf resort on Thursday with the message that it is all over now. But he is likely to be disappointed. The report is no acquittal. To the contrary, it is filled with leads for further investigation.

The Russians wanted Trump as president, that is for sure, and they used just about every resource to make sure that he would be elected. You can ask yourself why: Putin would benefit from an unstable, TV-addicted twittering crackpot at the helm of his biggest competitor on the world stage, someone who would spread discord in NATO (done), who would give the Russians free rein in Syria (done), and who would create unrest in trade with the EU and China (also done). Putin has discovered chaos as a weapon of war.

But maybe he benefited most from a president who would ensure a political mess inside the United States, a mess that would divide the country to the bone; leave it a lame duck. In that endeavor as well, Putin has succeeded superbly and the Mueller report will make another contribution to the mess.

Consider the next scene from “House of Cards.” Russian President Viktor Petrov is watching Fox News from the Kremlin, a vile smile on his face. “He’s fucked,” he happily concludes.