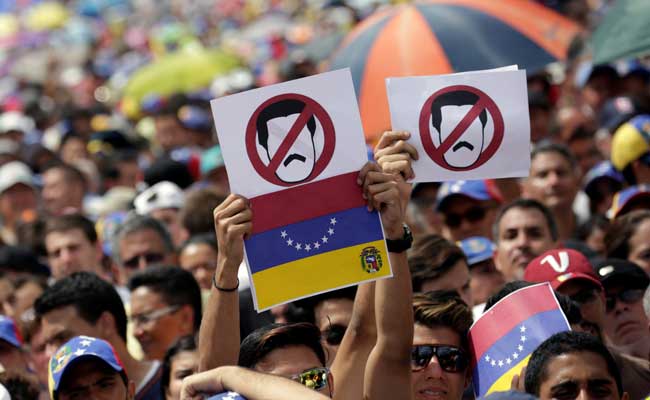 Coordinated support is required to depose the man who raised the poverty index to 85%.

The world is waiting for Nicolas Maduro to be overthrown. However, as time goes on, the president is tightening his grasp on power. The fact that more than 50 countries have acknowledged Juan Guaidó as acting president has not affected Maduro’s objective to prolong his presidency indefinitely. None of the measures that have been taken − international isolation, the United States’ efforts to keep him in check and the continual protests staged by the people − have had the desired effect. It was hoped that the release of Leopoldo López by the Bolivarian National Guard of Venezuela would be the trigger for his defeat, but Maduro emerged victorious. The events of April 30 show the extent of the support he receives from members of the military.

The reasons for the continued loyalty shown by high-ranking members of the military toward Maduro are well known. The economic benefits they receive for their continued support of this satrap are too lucrative to risk over a population that demands a change of government. Maduro will pay any price to keep them at his side. The fact is that, while these officers grow richer each day thanks to a corrupt regime, they will not join “the right side of history.” They fail to understand that the country does not want them running state-owned companies in return for their loyalty. But they will not renounce their privileges or the possibility of wealth offered to them by Hugo Chávez when he took power.

When will Maduro be overthrown? This is the question everyone is asking. The answer, however, is unclear. This is because while the Russian government backs Maduro, offers him military support and threatens the United States to deter it from intervening, it is unlikely that the regime will collapse. The U.S. government is aware of the price it will pay if it attempts military intervention to overthrow the usurper. The democratic governments of Latin America do not approve of the possible invasion of Venezuela. They continue to favor a diplomatic resolution over the use of force. Vladimir Putin’s support bolsters Maduro, who is confident that, while he has Putin’s support, the United States will not act on its threats.

The only thing that would force Maduro out of Venezuela would be a botched attempt to retain his power. For example, if the opposition protesters reached Miraflores Palace demanding that he step down, he could respond by launching a military attack. If he saw crowds of people closing in on him, Maduro would be capable of ordering the National Armed Forces to defend him by opening fire. So much blood would be spilled that the governments would go against their democratic principles and authorize the United States to act. Remember that, on Jan. 23, 1958, Marcos Pérez Jiménez left Venezuela in the presidential plane in response to protests against his government.

The other error that could end this dark era for Venezuela is if Maduro dared to arrest Guaidó. If this happened, the people would stage a rebellion to defend their leader. The United States would then have reason to do to him what it did to Gen. Manuel Noriega in 1990: stage a military intervention and then arrest and take him to the United States to bring him to justice for his crimes. Although Maduro may have arrested opponents like López, it would be an entirely different matter if he were to do this to Guaidó, who has the support of more than 50 governments around the world. Consider the fact that, until now, Maduro has not had Guaidó arrested, despite the open legal proceedings against him for leaving the country. Will he do it over the popular uprising that took place on April 30?

Ricardo Hausmann, professor at Harvard University, wrote the following in this newspaper: “Tackling the economic disaster caused by the government of Nicolas Maduro will require the coordinated support of the international community.”* In order to prevent Venezuela from further destruction, coordinated support is also required to depose the man who raised the poverty index to 85%, reduced the daily production of oil from 3.5 million to 1.1 million barrels in the last year and paved the way for a level of inflation that, according to the International Monetary Fund, could reach 10,000,000% in 2019. If this objective cannot be achieved through international pressure alone, there will be no choice but to ask the United States to act quickly to liberate the people of Venezuela from the hell in which they are currently living.

*Editor’s note: Though accurately translated, the original quote could not be verified.