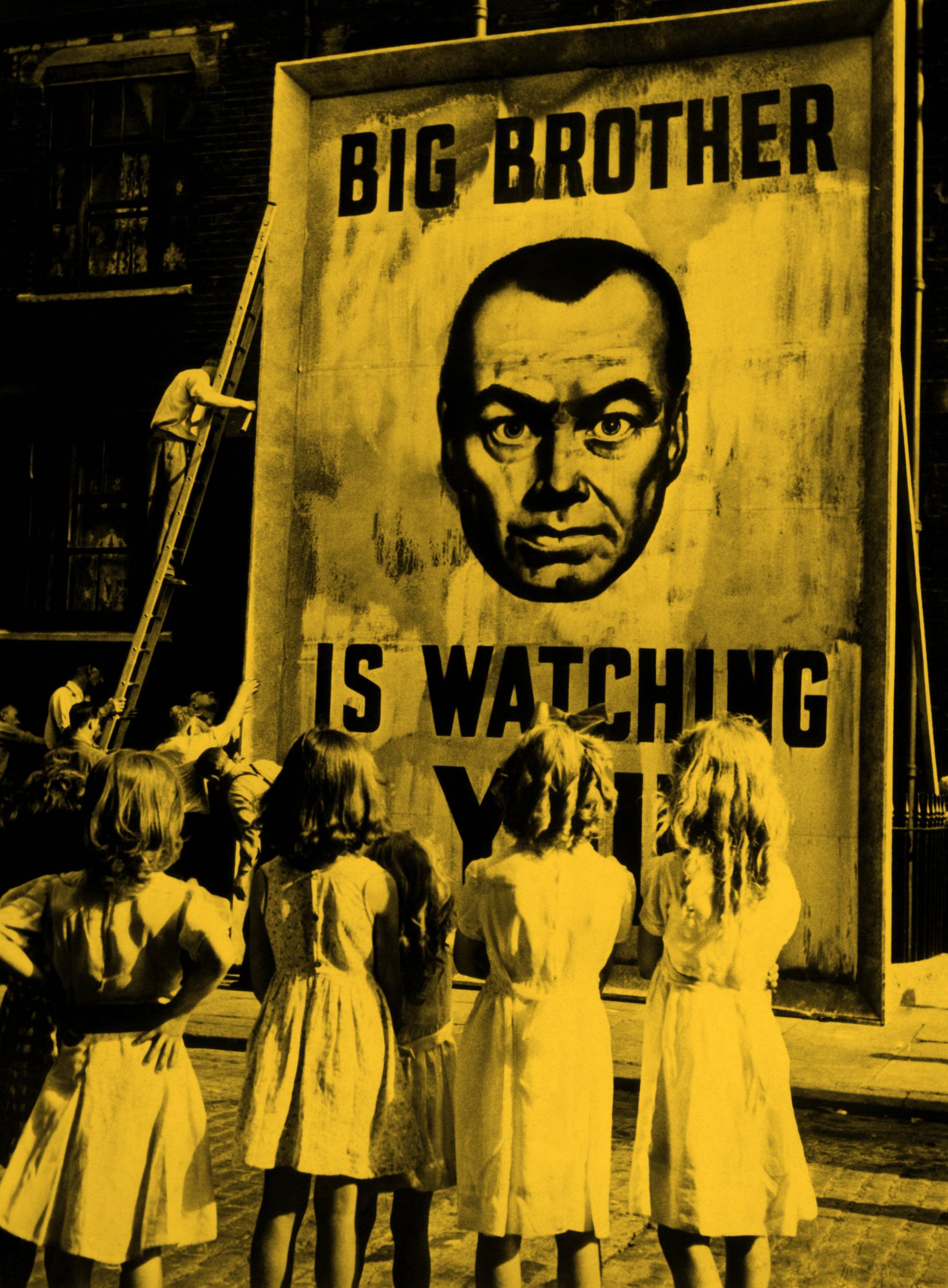 Orwell conceived his prophecy in “1984” as a warning. He saw a future full of institutionalized lies and mechanisms for oppressive surveillance. Like those of today.

“Nineteen Eighty Four” continues to be as disturbing as the mirrors which contort images in Valle-Inclan’s Cat Alley.* Although somewhat crude and deliberate, the novel, so titled in the original, but generally referred to by the numerical date “1984,” challenges generation after generation of uneasy and fearful readers who recognize traces of the world Orwell fabricated, or believe, as the Leonard Cohen song says, that “The rich have got their channels in the bedrooms of the poor.”

Yesterday, June 8, marked the 70th anniversary of the first edition of a work where George Orwell dove into what could be called political science fiction, with a dystopia whose echo has not lost strength.

Although “1984” has been continually republished and sold for a long time, sales of Orwell’s dystopian novel have recently skyrocketed. According to The New York Times, this occurred when the publisher of Penguin Books reprinted hundreds of thousands of copies soon after Kellyanne Conway, counselor to President Donald Trump, chastised the press for insisting that the administration admit the number of participants in Trump’s inauguration ceremony was false information, circulated by his staff. After all, said Conway, it should not be treated as either a lie or an error, but what could be called “alternative facts.”

Hearing her words, many citizens recalled certain predictions in Orwell’s novel. He predicted “newspeak,” a synthetic and reduced vocabulary, the poverty of which also seeks to reduce the capacity to think, and the “Ministry of Truth,” whose officials in the book apply themselves to correcting accounts of the recent past and rewriting history so it fits perfectly into the official narrative. In other words, what we saw in Conway was an uncomplicated implementation of the institutionalized lie, present in large or small measure, not just in Trump, but in general, in the discourse of politics, commerce, religion and journalism.

Are we walking docilely in the direction of a society of mass surveillance in which information is manipulated to keep people under control, as the novel reflects? Orwell imagined a post-revolutionary world where everything that happened before the founding Revolution of 1984 (humanistic values, forms of relationship, public debate, freedom of expression, culture….) was abolished and forgotten. The new materialistic society which the novel describes is divided into three classes: party members, “proles” and “slaves.” The apparatus of repression, omnipotent and implacable, watched every subject’s movement by means of a system of screens installed in public and domestic spaces. Privacy does not exist. Power is incarnated in an inaccessible tyrant whose image is exhibited everywhere with the slogan, “Big Brother is watching you.”

In a sinister London, the protagonist, Winston Smith, a modest yet restless employee in the department of History in the Ministry of Truth, meets Julia, employed by the department of Fiction from the same ministry. She operates novel-writing machines, which produce stories with simple plots and stereotypical characters, similar to those which, in our real world today, are written by computers using artificial intelligence. Winston and Julia fall in love and try to join an unreal clandestine organization of dissidents who know deep down that they are condemned to being weak, because the power is invincible. This tension between overwhelming power on the one hand, and love and freedom on the other, forms the substance of the novel.

Leaving aside notable exceptions, such as the control exercised by the Chinese government over its population and various regions, the omnipresent police state, all powerful and controlling, which Orwell created, does not exist. Paradoxically, one of the biggest problems in much of the world is the weakness or the bankruptcy of states. But the all-powerful technology monopolies, with their control of the truth and vampiric greed for information, could be a plausible substitute for that fictional state. In this sense, also in reality, Big Brother is watching you and spying on you—yes, like an agreeable interface and with the acquiescence and enthusiastic cooperation of the masses—by means of screens, the cellphones which everyone carries in their pocket, and the indelible digital trail left by each user.

In Western society today, sex is neither as repressed nor severely controlled as in “1984,” but encouraged and exposed. However, today youth are substantially delaying sex and practicing it less often, according to official statistics from a dozen developed countries cited by the American cultural magazine, The Atlantic. This delay could be a preliminary indication of a sexual recession, a signal of “a larger pulling back of physical intimacy that extends into maturity.” (The causes of this decline in libido could be economic pressures, anxiety, psychological fragility, the general use of anti-depressants, streaming television, estrogens dispersed by plastic in the environment, smartphones, lack of sleep, obesity, excess of information… or what occurs to any analyst.)

In the inferno mapped out by Orwell in his book, written in the postwar period, misery is pervasive, people walk with their heads down as if constrained, consumer goods are scarce, the appearance of things is gray, work is brutalizing and the hours abusive. Today, the real world is not like this, think the members of the Party. But the proles and the slaves certainly recognize these landscapes.

In one of the most famous, pathetic and theatrical scenes in “1984,” a scene which is called “two minutes of hate,” the masses come together in front of a big screen to boo and execrate the enemy in a demented paroxysm. Reading that is an inevitable reminder of social networks, where today anyone who sticks their neck out from the group is exposed to being virtually lynched.

Other artifacts and terms used to describe the world of “1984” were incorporated into the landscape and common language. Orwell conceived his prophecies as an admonition, a warning against future totalitarianism, be it Soviet or fascist, and against the cultivated system of the lie, that he saw for the first time in Barcelona, Spain, during the Civil War, which left him surprised and thoughtful as he noted, “how easily totalitarian propaganda can control the opinion of educated people in democratic countries.”

Orwell’s style is direct and has a formidable capacity to create empathy with the reader, who upon reading it, hears the voice of an honest, close and good character. This closeness is clearly a great literary virtue. Orwell is close, sympathetic, honest. Like Camus, he wrote propelled by a moral obligation. He had to leave his job as a police official in the empire of Burma, where he spent five years after studying at Eton, and where he returned with a strong anti-imperialistic political consciousness.

Technological monopolies, with their control of the truth, are a substitute for that fictitious state which he imagined.

He reported most truthfully about poor Londoners, and voluntarily became a vagabond. He associated with beggars on equal footing for a long time. Out of this emerged his first book, “Down and Out in Paris and in London.” In the same spirit of consistency and sacrifice, when Franco rose up against the Spanish Republic, Orwell went to Barcelona and immediately presented himself as a volunteer to fight at the front. This adventure was his testimony in “Homage to Catalonia” and the traces of his experience and knowledge about the logic of totalitarianism, reflected in his famous fable “Animal Farm,” would crystallize in “1984.”

This book was his legacy. Orwell wrote with Russian writer Yevgeny Zamyatin’s “We” in mind, working hard amid doubts and revisions on a cold and windy Scottish island, where he retired for the purpose of writing this book as a lengthy political testament soon after losing his very dear wife, and where he lived alone, sick with tuberculosis, which was often lethal at the time. Indeed, Orwell died a year after the book was published.

The British writer, John Lanchester, points out that the world today is very similar to the dystopia of Orwell’s professor, Aldous Huxley, in Huxley’s “Brave New World” of 1932. That book describes a society marked by science and technology and given over to a “narcotized sexual promiscuity,” tranquilized by pleasure and drugs (the miracle “soma”) and immersed in a general infantilization, and consistent with that, narrated in a lighter tone than that of “1984.” To understand the present, Lanchester proposes a synthesis between “Brave New World” and “1984.”

In this synthesis, perhaps, one should include some of the trends and innovations which inundate our world, such as “augmented realities” – drugs, prostheses, brain implants – new organs obtained by 3D printing, robots which control our houses and which learn and transmit our data, and virtual reality which entertains and anesthetizes. Orwell did not dwell on the descriptions of new technologies and machines; he put in focus a mental and social state. And for this reason, his readers connect with his prophecies, readers such as Dorian Lynskey, author of a recent Orwell biography, “In the Shadow of Big Brother,” who said, “The British were much more interested in the psychology than in the systems.” It is there that the key to power and to the mechanisms of control of the masses resides amid the lies and through the fear. This almost never changes.

*Translator’s note: Alvarez Gato is the name of a real alley which had some distorting mirrors like those in a fair which would elongate or broaden the reflection of a passerby.