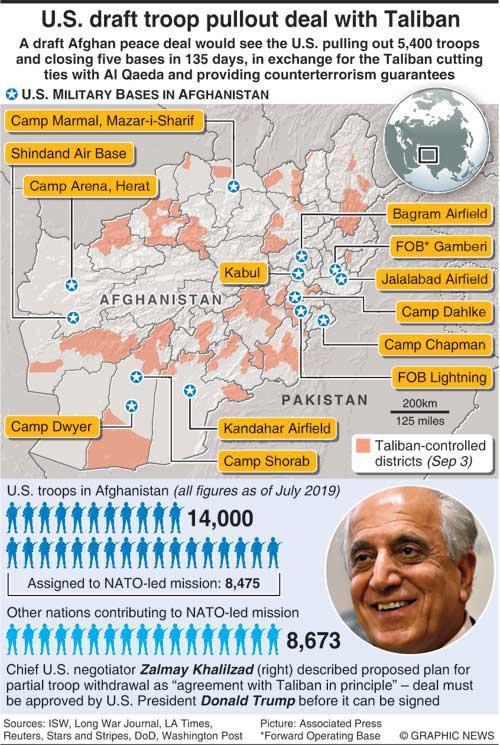 Why should the US leave Afghanistan? After all, it offered the US an ideal location to set up a listening post to spy on China and Russia. At present, in Central Asia, the US military presence is almost zero. Therefore, Afghanistan, on the southern belly of Central Asia, which is Russia’s backyard and China’s immediate neighbourhood, is a military asset for the US. Both Russia and China see the US presence in Afghanistan as a major security burden for them. Especially, for China, peace in Afghanistan will give a major boost to its Belt and Road Initiative (BRI).

Well, the US is not so naïve as to abandon a valuable military asset like Afghanistan. The talks with the Taliban are aimed at taming the Taliban – or keeping the US troops out of harm’s way. The US is not leaving Afghanistan, at least for now. The peace deal is to facilitate a US drawdown – from 14,000 troops to 8,000 troops who will not engage in combat operations. This will bring the US troop strength to the Obama era level. The decision to increase the troops was that of Trump. A troop-strength of 8,000 is still strong enough to face any crisis situation.

“In the Qatari capital of Doha, the deal being worked out is likely to be interpreted by the Taliban as a victory against the US in Afghanistan, a land that had become a graveyard for many an invading army”

It must be also recalled that it is not only the US that is holding talks with the Taliban, but Russia and China have also initiated peace processes to bring some order into the chaos that is Afghanistan. After the death of the Taliban leader Mullah Omar, a leadership battle has caused many a crack within. So there is a question which Taliban is talking to whom?

This explains why bombs go off in Kabul and elsewhere when peace talks are held in Qatar, Moscow and Beijing. On Monday, a massive blast killed at least 16 people in Kabul in the third Taliban attack that came as peace talks being held in Qatar were hailed as a threshold of a breakthrough.

The blast came as US peace envoy Zalmay Khalilizad was in Kabul on a mission to brief the sidelined government about the breakthrough being reached with the Taliban at the negotiating table.

Khalilizad told a television channel, “We have agreed that if the conditions proceed according to the agreement, we will leave within 135 days five bases in which we are present now.”

In return for reducing troop numbers, the Taliban are expected to sever their ties with al-Qaeda and hold talks with the Afghan government with the aim of creating an eventual ceasefire. These are problematic conditions because the Taliban’s al-Qaeda ties are still strong and the Taliban do not recognize the legitimacy of the Afghan government whose writ runs largely in Kabul, it suburbs and a few other areas. More than half of the country is under the Taliban rule or under various groups, including the ISIS and drug lords.

In the Qatari capital of Doha, the deal being worked out is likely to be interpreted by the Taliban as a victory against the US in Afghanistan, a land that had become a graveyard for many an invading army. The US came to Afghanistan in October 2001 to eliminate the Taliban and al-Qaeda, for the Taliban were sheltering al-Qaeda leader and his followers who were said to have masterminded the September 11, 2001 terror attacks on the US. Eighteen years later, the US is sitting together with the enemy discussing terms of peace –call it surrender.

It appears a Taliban takeover of the country, just as it happened in 1995-1996, is in the pipeline. Each time a foreign force withdraws, they let Afghans to fend for themselves after confounding the crisis. With the Afghan government not being a party to the talks, the Afghan people know little about the deal, except what US peace envoy makes public.

The US expects that the Taliban will keep to their word and will be on their best behaviour. Far from it, there is little guarantee that the Taliban would not turn their guns on the government — a lame duck without the US combat support. Once again the country will be plunged into an all-out civil war with the Northern Alliance – comprising largely the Tajiks, the Uzbeks and the other ethnic groups and various warlords – being revived to fight the Taliban. Pakistan, meanwhile, has hinted it may pull its troops back from the Afghan border to fortify defences along its borders with India as tensions between the two countries rise over Kashmir.

When asked about the possibility of such a bloody scenario erupting, the Trump administration has responded “trust, but verify”.

The talks with the Taliban were revived in January this year. But while the talks were underway, the country saw some of the worst violence in recent years. War related deaths have gone up by 27 percent in the past eight months.

Afghans believe for any talks to be successful every stakeholder should be heard. There is no guarantee that the rights the Afghan women have won would not be taken away by the Taliban at gun point. It should be recalled that the Taliban, when they were ruling much of Afghanistan from 1996 to 2001, girls’ schools were closed and women were not allowed to work. They were not allowed to come into the open without attiring them in a shuttlecock burqa.

Afghan women are using various platforms to speak about their fears of living under the Taliban rule. They urge the US not to trade their freedoms and safety by giving into the Taliban demands.