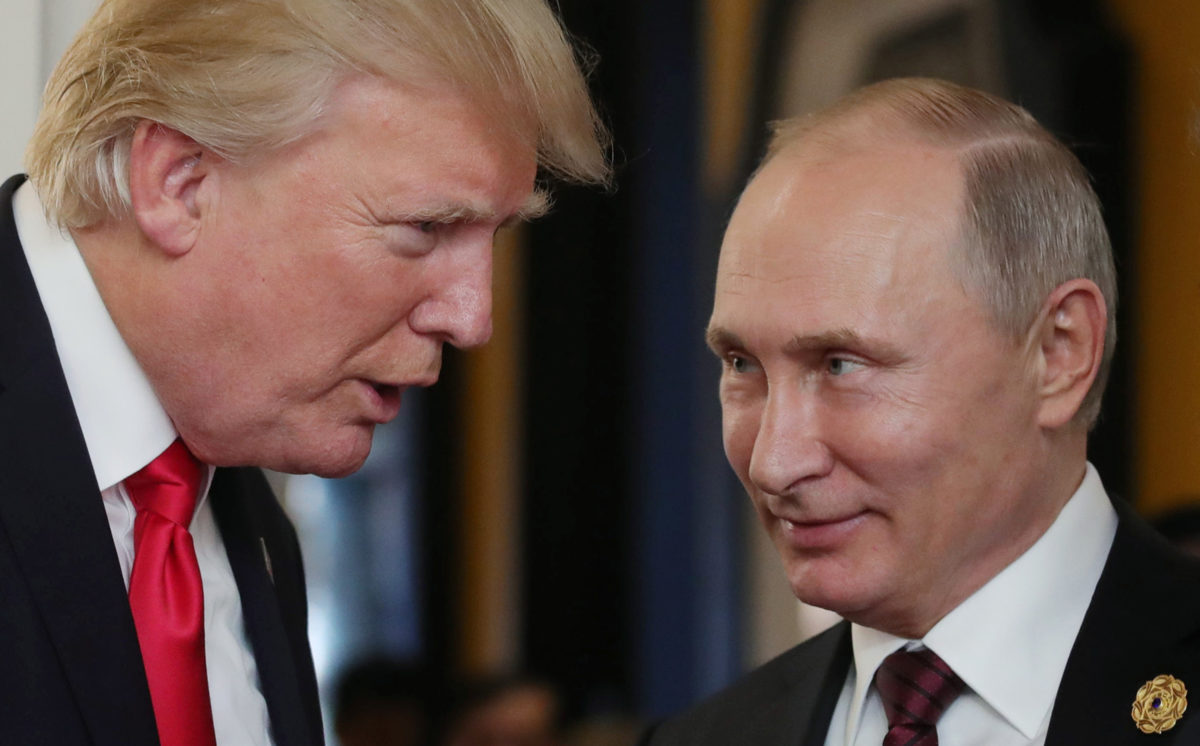 It should have been the moment when Donald Trump finally lost his cool. The discussion about the consequences of his decision to withdraw American troops from Syria was already overheated when the highest-ranking Democrat in the U.S. Congress, Nancy Pelosi, rose from her seat and pointed her finger at him. “All roads with you lead to Putin,” she fired at the president. This accusation, which sent Trump off on a massive tirade in mid-October, has been around for quite some time.

One does not have to be an adversary of the president to say that, regardless of whether it is Trump’s intention or not, many of his decisions are extremely favorable for Putin. Trump’s weakening of the trans-Atlantic partnership is as much in Putin’s own interest as is U.S. disengagement from international treaties and institutions, or the nationalist, and protectionist, motivated attempts to weaken the E.U. (see Trump’s most recent Pro-Brexit push). On a personal level, Trump shows a fascination with the Russian president, whom he has repeatedly and generously praised.

Putin has only nice things to say about the man in the White House (“brilliant,” “undoubtedly talented”). In an analysis for the renowned Russian discussion forum Valdai Club, Russian political scientist Andrei Tsygankov cites the “psychological compatibility” of the two heads of state as the basis for this Russian-American bromance: Both are similarly authoritative leaders. However, Russian foreign policy is decided by the Kremlin, while the U.S. political system puts certain limits on the president. These rules applied for at least the first two years of his term. As for Russian sanctions, the president knew Congress was against him. In 2017, Congress strengthened sanctions and waived the president’s right to unilaterally ease the sanctions in place.

At the diplomatic level, too, tensions have escalated following the expulsion of several embassy staff. Though the strongman in Washington cannot bring himself to say a disparaging word about his counterpart in Moscow, in reality, Russian-American relations are in bad shape. This is also due to the fact that, despite all of his undiplomatic tweets, Trump’s foreign policy has long been the area where the often seemingly erratic president has maintained the most continuity with his predecessors.

It is thus not uniquely Trumpian that the 45th president of the United States would like to improve relations with Russia. His Democratic predecessor, Barack Obama, already tried.

Obama’s government failed to succeed, and so has the current one. The foreign ministers of both countries have already stated many times that the relationship between the two former archenemies is worse off under Trump than it was under Obama; Russian Foreign Minister Sergei Lavrov and his interim American counterpart, Rex Tillerson, found the situation to be at “rock bottom.” Tillerson, a businessman who had quite an affinity for Russia in his previous role, lost his job a day after he called Russia an “irresponsible force of instability in the world” and called the poison attack on former Russian spy Sergei Skripal a “really egregious act.”

Trump replaced him with Mike Pompeo, who went on a charm offensive in Russia last May. In Lavrov’s own words, this triggered “a certain optimism” that the “damage in the relationship” could be “cleaned up” on both sides. At the time, that meant the American accusations of Russian influence in the 2016 U.S. presidential election, the mutual allegations of nuclear disarmament violations, and also their differing views on a number of international issues, particularly in Iran, Ukraine and Syria.

Since then, some “damage” has effectively been resolved. For well over a year, the president has been listening more and more to his own gut than to his advisers. As a result, Trump’s personal feelings are increasingly being incorporated into U.S. foreign policy, with Russia turning out to be the greatest profiteer.

Trump’s foreign policy is a “boon for Putin,” says former U.S. Ambassador to Russia Michael McFaul in an article for Foreign Affairs, a foreign policy magazine.

The president went against the opinion of the entire Republican Party and announced a withdrawal of troops from Syria in mid-October. This was a double gift for Putin: He finally established Russia, Syria’s ally, as the major power in the Middle East, and he snubbed both the U.S.-allied Kurds and NATO, Moscow’s military adversary. The House of Representatives’ ongoing investigation into Trump, which could end in impeachment, is also rooted in the president’s unilateral actions and also associated with Russia.

Ukraine finds itself once again in the middle of a power struggle, as Trump’s cohort put forth the long refuted conspiracy theory that it was the Ukrainians, not the Russians, who hacked the Democrats’ email servers ahead of the 2016 election. The fact that U.S. military aid to Ukraine was suddenly up for debate can be traced back to the Putin-friendly adviser whose influence increased after a game of personnel chess in the White House. Thus, Trump’s initial sympathy for Volodymyr Zelenskiy turned to dislike in a matter of days. According to media reports, Trump’s change of heart came after Putin personally pressured him over the phone.

Recently, it was, once again, Pelosi who criticized Trump over Russia. Contrary to the norm, Trump did not inform the highest ranking Republicans or Democrats in advance about the killing of Abu Bakr al-Baghdadi, the head of the Islamic State terror group, but he did inform Putin. He was the first to thank Trump after the event.