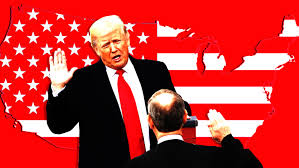 The first two witnesses appeared before the United States House Permanent Select Committee on Intelligence in the impeachment inquiry against President Donald Trump: William Taylor, acting ambassador to Ukraine, and George Kent, the highest-ranking official in the State Department with responsibility for Ukraine. Both had testified in closed sessions before the same committee; their testimony was recently released. Democrats are hoping support for removing Trump will grow as public hearings and the testimony of some of those involved make people aware of Trump’s crimes and appeal to the public conscience.

Trump is being accused of extorting Ukrainian President Volodymyr Zelenskiy. This is an issue not only for the U.S., but also for the entire geopolitical order; the national prestige of the United States as leader of liberal world democracies is in play. There was nothing positive for the White House in this first session.

The controversy is not too complicated. Trump is being accused of extorting President Zelenskiy, asking him to publicly announce a criminal investigation of Trump’s principal political rival, Joe Biden, as part of Trump’s 2020 reelection campaign.

Democratic Rep. Adam Schiff of California, chairman of the Intelligence Committee, is tasked with investigating the charges. In reality, there is little doubt about the facts since Trump himself revealed – in a summary of the fateful telephone call – that he asked Zelenskiy to investigate the Bidens, father and son. That document, although not a literal transcription, is central to the allegations. A truly convoluted interpretation would be required to conclude that Trump is not guilty. Trump’s allies are aiming for that in the hearings, but they cannot figure out how.

The first Republican strategy has been to discredit witnesses, which is very difficult. Taylor and Kent are career officials with more than 30 years of service, and have worked for both Democratic and Republican administrations. Both confirm the original claims of the anonymous whistleblower, whose identity remains secret, that there was an organized scheme directed by Rudy Giuliani, Trump’s personal attorney. Following the instructions of his client, Giuliani operated an irregular channel of U.S. diplomatic relations, whose purpose it was to pressure the government of Ukraine and its young and inexperienced president to intervene illegally in the 2020 election and thus help the Trump campaign.

A diplomatic maneuver of that scope would not go unnoticed by career officials. For that reason, then-ambassador of the United States to Ukraine, Marie Yovanovitch, began to resist. Giuliani spoke to Trump, and Ambassador Yovanovitch was removed from her post and additionally threatened in a frankly gangster-like fashion. She will testify in a public hearing on Friday.

There is not enough space to detail all the information that points to Trump’s guilt, but, believe me, there is plenty, and it is irrefutable. But perhaps it will not be sufficient. Why?

The next step in the process will be to develop formal counts of impeachment and submit them to a vote of the full House. Each charge will be subject to a vote, and if one or more counts are approved, which is likely given the Democratic House majority, the impeachment charges will go to trial in the Senate, where Supreme Court Chief Justice John Roberts will preside, and Democrats and Republicans will present witnesses and arguments. In the end, the senators, who form the jury, will vote for or against removal. Two-thirds of the senators are required for removal of the president.

That is where the Republican obstacle seems insurmountable. Can you imagine the Mexican Senate voting to remove President Andrés Manuel López Obrador? I can’t either.

That said, if public pressure grows during the hearings, electoral considerations might change the opinions of some senators. We will see. For now, in this column we will continue following the circus closely.