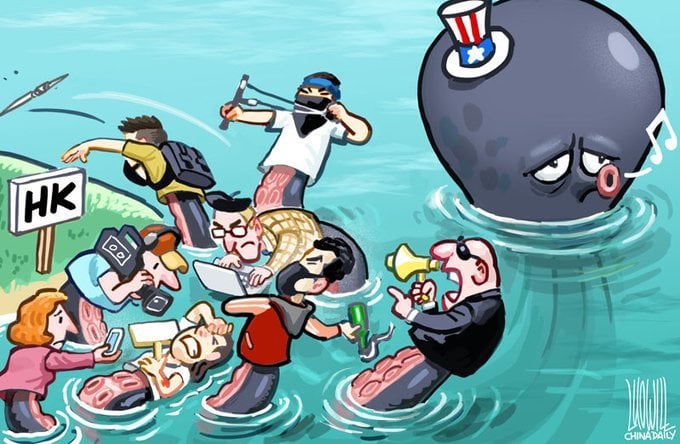 The U.S. Congress passed the Hong Kong Human Rights and Democracy Act, despite several tough negotiations with China and strong opposition from the Hong Kong community. This bill ignores facts, inverts right and wrong, and completely disregards the safety and well-being of over 7 million Hong Kong residents, openly supporting extremist, violent criminals in Hong Kong. The U.S. Congress and some politicians have recklessly involved themselves in Hong Kong’s issues, which is a brutal interference in Chinese internal affairs. In order to gain some hidden political benefit, they have resorted to double standards and long-arm jurisdiction, encouraging the escalation of violence and unrest in Hong Kong. By using political tyranny against Hong Kong, they have again plainly exposed the selfish and tyrannical nature of American politics to the world.

The most notable characteristic of this backstage hegemonic manipulation is its distortion of right and wrong. For five months, radical and violent criminal behavior has persisted in Hong Kong, and it has severely endangered the public’s personal and financial safety, trampled on law and social order, damaged Hong Kong’s prosperity and stability, and challenged the one country, two systems principle. Recently, extremists have escalated the violence and committed numerous malicious and infuriating crimes, causing the deaths of innocent civilians, the destruction of stores, large-scale interruption of traffic and the closure of schools. The city’s residents have faced severe widespread threats and damage to their basic rights and freedoms. Some U.S. politicians who acted as important advocates for the bill visited Hong Kong in October and openly stated that they “didn’t see any violence,”* to much surprise. The violence and damage that Hong Kong residents have witnessed firsthand, the horrifying and cruel injuries; are they nonexistent? Are the scars and bruises of today’s Hong Kong just an illusion? It’s clear that for Congress and the Hong Kong bill it has concocted, the facts are bent, turned upside down and set up to suit their needs.

For several months, American anti-Chinese forces and politicians have supported, encouraged and even directly guided Hong Kong’s violent criminals. Mike Pence, Mike Pompeo, Nancy Pelosi and others have had several high-profile meetings with anti-Chinese Hong Kong protest leaders, and some politicians have gone to Hong Kong to spout nonsense, slander the Hong Kong police force and add fuel to the fires of Hong Kong’s chaos. Numerous facts make it clear that the recent escalation of illegal violent activities and increase in extremism in Hong Kong are closely related to Congress’ involvement in Hong Kong and Chinese internal affairs, and their constant spread of dangerous and incorrect information. It’s clear that the tight collaboration between American anti-Chinese forces and Hong Kong extremist forces is the main driving force for continued revolt in Hong Kong. Acting as the world’s judge, with homemade gavel in hand, this hegemonic puppeteer paints Hong Kong’s violent extremists’ lack of humanity and terrible crimes as the pursuit of “human rights” and “democracy.”

Due to the violence, many Hong Kong residents cannot go to work as usual or collect wages; the sick and pregnant are unable to go to the hospital for treatment; and students are unable to attend classes. If they express opposing views on the streets, they may even become victims of arson as retaliation from thugs. The facts have already clearly proven that the greatest risk Hong Kong faces now is total submergence into violence, the threat of a slowed economy and the loss of the common citizens’ welfare. If Congress truly cares for the well-being of Hong Kong residents, it should earnestly consider how to suppress violence, give citizens a sense of security and let the island return to normal. Its repeated discussion of human rights issues and democracy is nothing more than a pretense. Its true goal in passing this bill is nothing more than an attempt to destroy Hong Kong’s prosperity and stability in order to hinder China’s development.

The passing of this bill in Congress is, in essence, a foolish attempt to achieve its own political ends. The bill will only hurt others to no one’s benefit. In the past 10 years, the United States’ bilateral trade surplus with Hong Kong was the largest of all its global trading partners, exceeding $3.3 billion in 2018 alone. There are currently 1,344 U.S. companies stationed in Hong Kong, 278 of which are regional headquarters. There are also around 85,000 Americans residing in Hong Kong. Unilaterally altering trade laws with Hong Kong will have a negative impact on U.S. companies and citizens, too.

The greatest right and desire of the Hong Kong community is the end of chaos and violence and the restoration of order. However, Congress and anti-China politicians on their high horses who claim to support “freedom,” “democracy” and “human rights” love to play the hegemonic puppeteer, and openly instigate anti-Chinese forces of unrest and violence in Hong Kong. They plan to continue to tyrannize and torment Hong Kong in order to reap private political gain. Here, we want to give the U.S. a stern warning: Hong Kong is China’s Hong Kong. As for any plot to push Hong Kong into the abyss of turmoil in order to constrain China’s peaceful development, the people of Hong Kong refuse it, and 1.4 billion citizens of China won’t allow it. The Chinese government won’t sit by and watch; it must adopt forceful countermeasures. The U.S. must stop playing with fire; otherwise it will get burned.