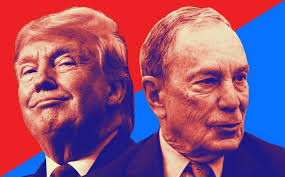 Nobody else will be able to stop incumbent President Donald Trump in the 2020 presidential election, billionaire Michael Bloomberg fears, so he wants to challenge him, himself. Next year, we may well see a duel of the billionaires. Or, alternatively, Bloomberg will contribute to a Trump victory, which is more likely, considering the suicidal behavior of Bloomberg’s Democratic Party.

Let’s start with the first possibility. If Bloomberg were the Democratic presidential candidate, he would have a decent chance, even if it’s not more than a 50% chance, of beating Trump. Trump draws on a certain degree of populism, and he appeals to normalcy and order as opposed to what progressives seek. Bloomberg would also interest some of these voters. Although he apologizes for it these days, it was Bloomberg who, as mayor of New York, introduced a very tough policy toward criminal suspects. And it was Bloomberg who pushed for quality schools and strict standards for students. At the same time, he’s capable of exciting a portion of progressive left voters, as he demonstrated in New York with his fight against smoking and unhealthy fats. What’s more, he has a plan for (moderate) limitations on the possession of firearms.

But first he must win the Democratic Party’s nomination. And there he’s under fire from the leftist presidential candidates, who reproach him for his wealth. Candidates Bernie Sanders and Elizabeth Warren, for example, accuse him of wanting to buy his candidacy and avoid the higher taxes they’re planning. “Billionaires shouldn’t exist at all,” according to Sanders.

It’s hard to react rationally to that. Bloomberg, moreover, is also competing with another moderate Democrat, former Vice President Joe Biden, which will divide the middle-of-the-road votes. The result may be a victory for leftwing radicals, which will lead to Bloomberg’s fears coming true when billionaire Trump wins again, although Democratic progressives will be happy to have forged a principled policy against the rich.