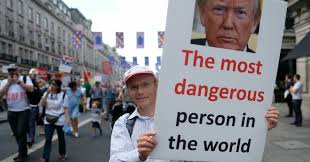 Nothing will ever excuse the tremendous, historic mistake that is Donald Trump, which will become only greater over time.

There is a right-leaning fringe that sees a method in Donald Trump’s exercise of power. Instead of analyzing him for his actions when taking a position, they claim he is not only changing these times, but dominating and meeting them. Day after day, a new piece of this theory falls apart. Especially today – more than ever.

Although it is undeniably true that certain politics have radically changed for the worse (momentary influence is a benefit that comes with the U.S. presidency) and that similar leaders have appeared in the West, it seems to me not to signify a solid or lasting strategy, as some believe. Chaos has nothing to do with any medium or long-term plan. We must not confuse the rise of the extreme right with the exercise of power of the current American administration. Trump’s election is a completely different thing.

An economy that grows in cycles, as it does today, is not enough to hide the weaknesses of the most disastrous and dangerous president in American history. In fact, these failings have never been as exposed as they have been because of the impeachment or as irreversible. As if that weren’t enough, there is the most recent action that led to the death of Iranian Gen. Qassem Soleimani, in Baghdad. Until now, the U.S. has had little engagement in foreign politics, and has held back, which led many to think, rightly or wrongly, that we had a completely different United States (there were signs of this with Barack Obama), that was more concerned with its own interests, even when it came to international relations. Despite everything, trade war with China was always accepted – not only by Republicans, but also by Democrats.

The same cannot be said regarding this poorly thought through attack. Apart from the thousands of Americans in Iraq and Iran who are left to their fate in enemy territory, the European Union – regarded as anything but an ally when it comes to Syria, will probably not show support for an attack that violates international law. Russia? It is enough to have heard the official reaction strongly defending the danger this killing entails due to Soleimani’s importance in the Middle East. China? It would not support this killing, even if one disregarded recent relations between the two countries. Maybe an apathetic radical like Jair Bolsonaro would solidly ally with the U.S., but Bolsonaro’s support carries as much international weight as support from the president of Andorra.

Even with the likely reelection of Trump in November, the chances of which are reinforced by the resurrection of the battle between good and evil, offered for domestic consumption, nothing will ever excuse the tremendous historic mistake that is Trump, which will become only greater over time.

Enticing and manipulating outraged and frustrated voters and turning them into fanatics is completely different from exercising power after you have done so.

How many times has America taken such a step backward in history as it has recently done?

In evolutionary terms, little will survive; no one knows if the country, once a beacon in the West, will ever be what it was before this president.

When I hear and read about those who worked with or dealt with Trump and Mike Pence (i.e., Steve Bannon, Michael Wolff and so many others), I always notice that there is nothing beyond the chaos. We are left with ashes of the fire and fury that survive apart from any cause or common thread. One of the crucial aspects of affirming the European Union in this new decade lies with European leaders, such as Emmanuel Macron, who understand the current weakness of the American president (which will become even worse) and work with it. And affirmation of the European Union is greatly needed.

To be political or not to be at all.

This may also help rapidly transform what some see as a new world into the increasingly weak and dangerous world of Trump.