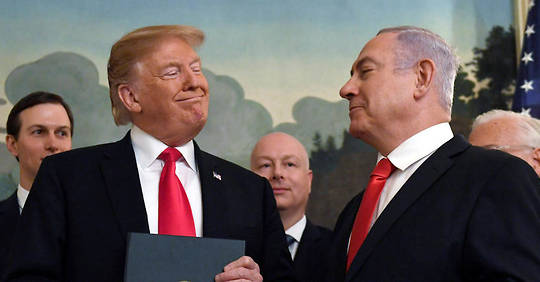 The “deal of the century” unveiled by Donald Trump deserves credit for its clarity. He is offering Palestine to the victor: Israel.

It’s about time. After a three-year wait, Donald Trump has finally unveiled his “deal of the century,” which is supposed to settle the Israel-Palestine matter once and for all. This plan is a scandal, a farce and an insult to reason. But it would also have a silver lining if it were actually implemented: It would finally clarify the situation in the Middle East, after more than a half century of smoke and mirrors.

This “plan of the century,” the brainchild of the American president’s son-in-law, Jared Kushner, has a clear first objective — to allow Trump and Benjamin Netanyahu, two friends with closely related political destinies, to give each other a helping hand. As the former is in the middle of impeachment proceedings and the latter is being pursued by the Israeli courts, the two men are engaging in low-cost self-promotion (or so they think). For Trump, each move made in favor of Israel is a win in the eyes of his evangelical electoral base. As for Netanyahu, being supported by American power is always beneficial, particularly a few weeks before the next Israeli elections.

However, the American plan goes far beyond an arrangement between friends. The task now is to seal the deal in the Palestinian territories. It is not so much a question of achieving “peace” in the region, but rather taking advantage of 50 years of a policy of “faits accomplis” pursued consistently at the expense of Palestinians. Annexation of the Israeli settlements, the Jordan Valley, or even the bulk of the West Bank? As befits the victor: Israel.

This is because the “deal of the century” is, on a practical level, a purely Israeli-Israeli affair. At best, it will serve to mediate the interests of the different factions of the right and an extreme right which is demanding even more, as it should. Palestine is up for grabs, according to this plan, even if the details still need to be agreed upon. Incidentally, here Netanyahu and his methods have returned to the center of the political spectrum.

This “deal” has some good aspects, as long as they are acted upon. Cast out the mantra of “two states living side by side,” banish into oblivion a Palestinian Authority which hasn’t served any purpose for decades. Stripped of all its frills, the situation may indeed be shown for what it really is: a Palestinian population that has been undergoing “annexation” for a long time. In the absence of sovereignty, they must now endeavor to claim similar rights to those of the Israelis.