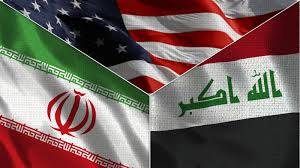 If the U.S. wanted to curtail Iran and break the back of its regime, but found that military and logistical obstacles would impede certain plans of attack, it would seem natural for it to choose an alternative strategy of suffocating Tehran instead, dismembering the many tentacles it uses to project anxiety and fear throughout the region.

However, every concrete action America has taken thus far suggests that it has failed to live up to its rhetoric of limiting Iran and Iran’s ability to interfere with its neighbors, of rooting out Iran’s reach spread across all of Syria, Iraq, Lebanon and Yemen. Were America truly serious in its conviction to limit Iranian influence, it would have to start with Iraq. It knows that Iraq has become a deeply ingrained source of Iran’s regional influence, its very own playground and golden goose combined. Iran knows how Iraqi land and airspace act as conduits for Iranian activity in Syria, Lebanon and Yemen, and how the ruling class in Iraq is completely indebted and loyal to Iran for the religious and doctrinal legitimacy that underpins its political authority, as was demonstrated in a shameful scene in the Iraqi parliament. It was there that Iraq proclaimed its full-throated allegiance to Iran against the U.S., and responded to Adel Abdul-Mahdi’s demands to remove all American troops from Iraq, with resounding support and slogans wishing long life upon Iran and mercy upon the late Quds Force commander Qassem Soleimani.

Despite all that, America remains insistent on supporting the political process in Iraq, and has announced its support for incoming Prime Minister Mohammed Allawi even before he has named his cabinet. America knows that his government is the product of two political factions sharing a loyalty to Iran at their core, and that he would have never even declared his candidacy without the support of Iran-aligned militias. America heard Ayatollah Ali Khamenei praise him as the right man for Iraq, confident in Allawi’s upbringing according to Iranian beliefs and Allawi’s having identified as half-Iranian on his mother’s side. If America wants to expel Iran from Iraq, it will find its greatest opportunity to do so today by supporting the uprising and the youth who have remained standing in the public square for months.

Iran’s ambitious dreams of a so called imperial revival have been exploited and used as a hammer to smash its historic Arab rivals, especially those countries surrounding Israel. When its mission is successfully completed, it will no longer be of any use; American pragmatism knows no perpetual friend nor enemy. In pursuing its national interests, the United States government cares less about particular short-term policies than advancing grand strategic plans for policy and its position for the next half century. In that sense, America does not care who rules Iraq so long as it firmly secures its interests in the contracts and agreements (both open and secret) which allow it to extract the treasure it desires.

Certainly then, American strategy feeds into how demonstrators have mounted a nationalistic rejection of Iraq’s current political process and the institutions that have arisen from it. Among the demonstrators’ most central demands are the establishment of free and fair elections in Iraq devoid of the corruption brought on by patronage and outright thievery. It is these demands, therefore, that have prevented America from issuing its support for the demonstrators or endorsing their national project, apart from a transparent propaganda campaign by the media that insults the intelligence of the Iraqi people. The protests do not come from the kind of thinking that America wishes to propagate in the Arab world; the protests come from a generation which rejects any occupation by a foreign power, a sentiment expressed with particular clarity in young people’s demands to depart from the current political process and form a national government that fundamentally rejects foreign domination in any form whatsoever. Surely, were such a government to take shape, it would promptly review the insidious agreements its predecessors have made with foreign powers and expose them for the treachery they are, for the plundering of Iraq’s natural wealth cannot be permitted under any pretense!

Accordingly, it is impossible for America to overstate its commitment to the political process in Iraq, however intensely the country’s children rebel against their traitorous leadership. Despite its opposition to Iran, its goals for the Arab world mean that it will continue to support the incoming prime minister and will turn a blind eye to the crimes committed against the peaceful demonstrators after the formation of a new government, which will no doubt bring an entirely new level of cruelty to the Iraqi people in the years to come.