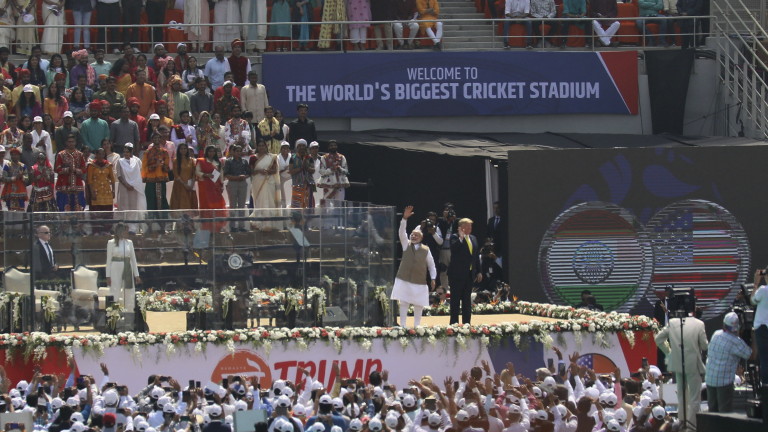 They say that the way to a man’s heart is through his stomach. Given the specific types of food in India, however, the dining experience of those unaccustomed to spices can cause a very unpleasant and revolting reaction, especially by a stomach that is used to burgers and diet coke. Indian Prime Minister Narendra Modi knows this perfectly well, and chose to reach Donald Trump’s heart not with chili peppers and turmeric, but in a way that the U.S. president would really appreciate: with a wall and a stadium full of supporters.

According to media reports, the Indian government spent more than $14 million to erect a wall in Ahmedabad, saturate the city with billboards and pictures depicting the American visitor, and round up stray dogs roaming the streets. New Delhi authorities say that the wall in question was built for security reasons. On the contrary, Modi’s critics insist, the facility was constructed to hide the slums of Ahmedabad from the eyes of the glamorous guest. According to the Pew Research Center, Trump once again continues to be popular in India (with a 56% approval rating), unlike almost all other research polls conducted by the American think tank in Asian countries.

Meanwhile, one of the biggest dramas in India’s foreign policy is that it is forced to devote too much attention and resources to the West (along the axis of tension with Pakistan in Kashmir), while it misses chances and opportunities in the East (connecting its northeast with Thailand, Myanmar and the Association of Southeast Asian Nations). When it looks to the West, New Delhi sees China. (One of the flagships of the Chinese “One Belt, One Road” policy is in Pakistan – the China-Pakistan economic corridor.) When it turns to the East, India sees Beijing’s growing economic and political influence over Southeast Asian countries.

In this context, the U.S. – China’s main and most vocal competitor – is more than a logical partner for India. But for this to continue, there are two red lines that Washington should not cross when it comes to New Delhi.

One of the red lines is the concept of India’s strategic independence. Having this in mind, the U.S., although in a more cumbersome way, understands why Russia continues to be New Delhi’s main supplier of weapons (as well as why India bought an S-400 anti-aircraft missile system from Moscow). Although the share of American arms and equipment supplies to India is growing every year, New Delhi’s idea is not just to replace one importer with another, or, in this case, Russians with Americans. Such a thing would lead to India’s dependence, which the country would prefer to steer clear of.

The second red line is interference in India’s internal affairs. Hence, the country does not accept any such interference, including American mediation, in its conflict with Pakistan over Kashmir. Meanwhile, India has also revoked the special status of Jammu and Kashmir, and rejected the considerations that followed from a number of countries. India recently updated its legislation against Muslim refugees, who seek citizenship.

As long as the U.S. does not allow itself to step on or cross India’s two red lines, Washington can count on a more fruitful partnership with New Delhi, especially since there is a fertile foundational relationship the two countries.

For example, India is one of the Asian countries where Trump can see a reflection of his own protectionism. The reasons, including ones based on electoral considerations, why Trump imposed tariffs to keep American farmers relevant are identical to the reasons why Modi refused to enter the Regional Comprehensive Economic Partnership: a flood of Chinese goods and production at the expense of local residents. Instead of multilateral trade agreements, the New Delhi authorities prefer bilateral ones, which they implement with almost all RCEP countries. In this respect, Modi is the Asian Trump, and Jair Bolsonaro is the South American Trump (although such comparisons are easier to make than to reasonably argue for).

Of course, there are certain tensions between India and the U.S. when it comes to trade relations. Trump and Modi were levying tariffs on each other, and the U.S. president even removed New Delhi’s special status as a trade partner, as well as hindering the supply of Iranian oil to India when he imposed sanctions on the Persian state. New Delhi has also responded reservedly to trade talks between the U.S and China, as Beijing pledged to import goods and services from Washington that the Chinese could purchase from Southeast Asia and India. The Trump administration, however, according to an already-established pattern, looks at countries with which there is a trade deficit (although more modest in nature; U.S trading with India for 2019 is worth just over $23 billion).

And at the most recent meeting between Modi and Trump, it became clear what was already known in advance: that there is a lot more to do until both sides can sign a free trade agreement.

If there are still numerous other compromises to be made in the trade relationship between India and the U.S, their defense and security partnership has in fact never been better. The most recent example is from the end of last year, when both countries signed a series of agreements regarding the exchange of classified information and technology between their military industries. Again, at the end of 2019, India and the United States conducted joint military training (Tiger Triumph), which included Indian land, sea and air forces. (The Indian military had previously conducted such extensive training only with Russia.) During the meeting between Modi and Trump, it became clear that New Delhi would buy U.S. helicopters worth between $2.6 and $3.4 billion (depending on whether 6 AH-64E Apache helicopters will be added to the already agreed-upon 24 MH-60 Romeo aircraft).

All this is happening against the backdrop of better than ever political and diplomatic relations between New Delhi and Washington, including in the areas of foreign relations and defense. In 2018, the U.S. rebranded its vision to counter China’s influence in Asia. (At the time, the Trump administration presented its “Indo-Pacific strategy,” which aimed to counter Beijing’s influence in this wide geographical region with the help of a coalition between India, Japan and Australia.) The role that the U.S. administration envisions for India is to confront the economic arteries and commercial ports of the Chinese “One Belt, One Road” initiative along the east coast of the Indian Ocean (i.e., Southeast Asian countries). The latter, at least in theory, is consistent with India’s policy of “looking east, acting east.”

And if Indian food tastes spicy and as such is not for everyone, then at least on the politics menu, Trump and Modi have reasons to share similar tastes.