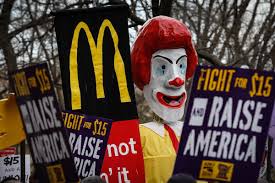 The merits of the minimum wage are starting to get recognized, even on the other side of the Atlantic. It raises the living standards of the poorest people and does not reduce the number of jobs, because many employees are already underpaid.

Every Democratic presidential candidate, including Joe Biden, is in favor of increasing the federal minimum wage to $15 per hour (approximately 13.50 euros per hour), that is, to more than the minimum wage in France (which is 10.15 euros per hour before taxes). It is not surprising that the candidates are taking this position, given that 86% of Democrats are in favor of a $15 minimum wage. The increase is not unpopular even among Republicans, who are 43% in favor. The main objective of the minimum wage is to provide workers with a decent salary. But economists have identified a potential problem: The minimum wage could reduce employment. Why? It’s very simple: Mainstream economic theory predicts that increasing the minimum wage pushes up the cost of labor, making companies less inclined to hire people.

If it were that simple, the two-thirds of Americans who are in favor of raising the minimum wage would be wrong. In fact, the salaries of those with jobs would increase, while sacrificing those who have become too expensive for their employers, as well as the unemployed. However, historically, increases in the minimum wage have often had no effect on employment, sometimes having negative effects and sometimes positive effects. Insofar as an increase in the minimum wage does not reduce employment, it does its job and guarantees higher living standards for the poorest employees. Americans are not as stupid as a junior economist might think.

How do we explain the fact that an increase in the minimum wage does not reduce employment, even if it raises the cost of labor? It is still a hypothesis based on the theory of supply and demand: If a product becomes more expensive, demand decreases. Yes, but the standard theory assumes that salaries are paid in proportion to their contribution to the company’s revenue. But this hypothesis is not realistic: Companies can underpay their employees when those people have little chance of finding an equivalent job. And if the employees are underpaid, they can then increase the minimum wage without destroying jobs, as long as the minimum wage does not exceed labor productivity. In fact, economic theory posits that the more underpaid employees are, the better chance there is that an increase in the minimum wage will increase employment.

When a small number of businesses dominate a labor market, we say that this market is saturated. In this case, workers do not have many options and are therefore more likely to be underpaid, because it is more difficult for businesses to stay competitive. We therefore expect the minimum wage to have more positive effects on employment in more saturated labor markets, those in which there is less competition among companies and in which employees tend to be underpaid.

If the Democratic candidate wins the presidency in November, we can expect to see the federal minimum wage increase to $15. This increase is likely to have little effect on employment. Since many Americans are underpaid, businesses can afford to increase salaries without resorting to layoffs. Poor workers have seen their salaries stagnate since 1980, and this boost could therefore be welcome. Now the Democrats must beat Trump in November.