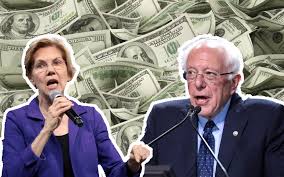 Despite the importance of the issue, progressive candidates had rather vague proposals.

Many people were excited that economic inequality in America would finally be at the forefront of the debate in the Democratic primaries. However, enthusiasm for this subject did not last more than six months.

In mid-October 2019, economic inequality became one of the key topics in the race for the Democratic presidential nomination. This remained the case until one by one, the candidates who campaigned on this issue dropped out of the race. Last Wednesday, it was Bernie Sander’s turn to throw in the towel, following in the footsteps of Elizabeth Warren, who withdrew from the race in early March, as had other Democrats before her.

Economic inequality in the United States is not only an important topic and crucial for sustainable economic growth, it’s sexy. That is the main problem when such an issue gets tangled up in political rhetoric that needs to at least be credible.

Both Sens. Sanders’ and Warren’s proposals, the two most prominent proposals on this subject, were as blunt as they were vague, a paradox that was not lost on the American people, even among those who have been most affected by economic inequality. Since the 80s, the total number of Americans in middle-class households (defined as households with an annual income of approximately $78,500, or $402,000 in Brazilian real currency) has declined from 60% to 50%.

Over the last four decades, no other country has experienced such a dramatic inversion of wealth distribution as the United States.

Warren’s proposed tax reform included a 2% inheritance tax for family inheritances over $50 million and a 3% inheritance tax for family inheritances over $1 billion. This proposed tax could have potentially generated $2.75 trillion in revenue over 10 years for social programs. Warren supported a universal public health care system, which would have cost approximately $20.5 trillion over a decade. This plan did not involve increasing tax rates for the middle class. Warren also pledged to forgive a portion of student debt and make higher education free in public universities.

Sanders’ proposals were similar, both in theory and in lack of concern for revenue and spending.

Sanders’ plans, including a profound transformation of America`s manufacturing industry in order to fight climate change, would cost an estimated $100 trillion over 10 years. These plans would entail increasing public federal spending threefold. Despite Sanders’ pledge to not increase middle-class tax rates, such an increase in spending would be impossible without increasing taxes on the middle class.

Joe Biden’s path to the Democratic Party presidential nomination is now clear. Radical Democrats will now have time to come up with policy proposals that are not based on left-wing populism.